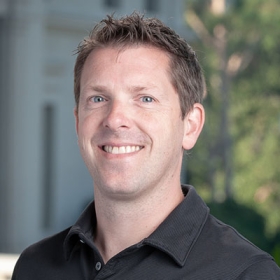 Jim Brown's research is in number theory, with a particular emphasis in modular forms and arithmetic geometry. He has an interest in supervising undergraduates in research projects in number theory and closely aligned areas via his summer REU program (not to be confused with the URC).  Interested students should apply for a position in the REU through mathprograms.org.  Read his Oxy Story profile.

Brown's research is in number theory, with a particular emphasis in modular forms and arithmetic geometry.  While his interests in modular forms are mostly in their application to problems arising in number theory, modular forms have applications to physics, coding theory, group theory, field theory, algebraic geometry, and many other areas.  Brown's research has been supported in the past by a National Security Agency Young Investigator Grant as well as a 2.1 million dollar Research Training Group grant in Coding Theory, Cryptography, and Number Theory.

Before arriving at Occidental, Brown served on the admission committee for prospective graduate students in mathematics at Clemson University.  If you are interested in learning more about graduate school in mathematics, he would be happy to answer any of your questions and help you with your application process.

Undergraduate research in mathematics is something that students should get involved in early so they have sufficient time over the course of their college careers to get to the point of doing real original research.  Brown has supervised numerous students in undergraduate research through one on one mentoring, in small groups of students, and through NSF funded REUs.  The following are publications co-authored with undergraduates (for a full list of publications please see http://jim-brown.oxycreates.org/research.html):