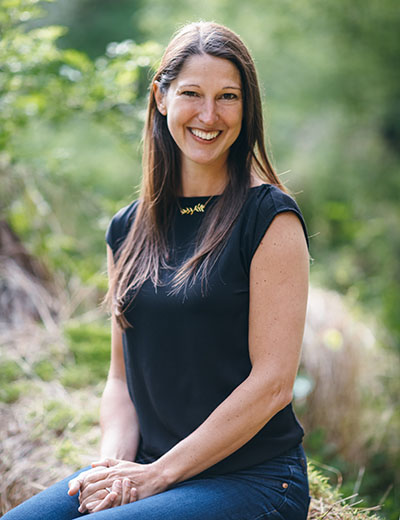 Shanna Devine says she found her academic home at Occidental when she discovered the Critical Theory & Social Justice (CTSJ) major, which was established midway through her college career by Professor Elmer Griffin. She was intrigued by the major’s focus on intersectionality, taking subjects she was already interested in and showing how their interactions could be applied to evaluating the effectiveness of public policy.

“I felt like it was exactly what I was looking for in my education,” says Shanna, originally from Silver Spring, MD. “From my perspective, it was a major that took all the theory and the policy that you could make look really good on paper, and challenged it to see how it actually applied in practice.”

CTSJ Professor Caroline Heldman connected her to a summer volunteer opportunity with a women’s shelter in New Orleans that Heldman established after Hurricane Katrina. The shelter was centered around an empowerment-based approach, to provide women with the necessary tools and support to break the cycle of poverty. Shanna became so passionate about her work there that she got approval to turn it into an independent study curriculum and remained there throughout the fall semester while writing her senior thesis and establishing additional independent studies.

“[CTSJ] took all the theory and the policy that you could make look really good on paper, and challenged it to see how it actually applied in practice.”

Her senior comps, which won the departmental award, explored the inadequacies of the legal system in responding to the needs of these women, who were largely low-income women of color and survivors of domestic violence. Shanna also worked with similar populations in Brazil during her study abroad experience.

“For me, this work was the bridge back to CTSJ and thinking about public policy in a real way,” she says. “It was cutting through all that noise and theory and saying, this is how we're supposed to be serving those in need, but this is where those needs aren’t being met in reality. And that humanized academia for me. It made it feel relevant. It made it feel meaningful.”

It is not surprising, then, that Shanna embarked on a dedicated career in service and social justice. She worked for the Government Accountability Project, a whistleblower protection organization in Washington, DC, in addition to other advocacy roles for more than a decade. Then in January 2020, Shanna had the rare honor of being appointed by House Speaker Rep. Nancy Pelosi as the inaugural director of the Office of the Whistleblower Ombuds at the U.S. House of Representatives.

A new but permanent congressional office, it was established as an independent and non-partisan support center within the House of Representatives. For a long time and throughout Congress, Shanna says, there has been a lack of consistent guidelines and best practices for working with whistleblowers from both the public and private sector. The office aims to remedy this, providing House staff and offices with the tools to effectively, safely and constructively work with whistleblowers who may contact their offices.

“I had the background, expertise and a long history working with Congress in a bipartisan capacity on this very issue,” Shanna says, “helping to advise them on how to work effectively with whistleblowers and supporting legislative campaigns to strengthen whistleblower protections. So it was a natural fit.”

“At Oxy, I was constantly thinking about the fact that I wanted to pursue a path that would allow me to be part of transformative change and to help address systemic injustices.”

She has two deputy directors on her team who are also attorneys. The collective expertise is invaluable, she says, and it’s one of the most rewarding parts of leading the office. She loves working across the aisle on an issue that will always transcend party lines, and she feels like her team is planting the seeds for future good.

“At Oxy, I was constantly thinking about the fact that I wanted to pursue a path that would allow me to be part of transformative change and to help address systemic injustices. Now I'm in a position to help institutionalize congressional best practices for working with whistleblowers—those individuals who bravely speak truth to power at immense risk to themselves.”

When she’s not working or commuting to work via bicycle, Shanna enjoys reading, yoga and being in nature with her husband and dog. She also practices Reiki, a form of energy healing, and offered her services as a hospice organization volunteer prior to the pandemic.

“When I very unexpectedly received this new award,” she says, “I felt a sense of honor, humility and gratitude because all the work I’ve done feels like an outgrowth largely of my education at Oxy through CTSJ, through Caroline and Professor Griffin as my mentors, and other incredibly influential allies and educators along the way.”