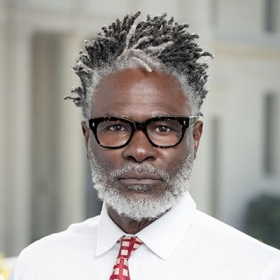 Glenn A. Elmer Griffin, Ph.D., is a licensed clinical psychologist and professor in the Department of Critical Theory and Social Justice.

Stupidity is neither ignorance nor organicity, but rather, a corollary of knowing and an element of normalcy, the double of intelligence rather than its opposite. It is an artifact of our nature as finite beings and one of the most powerful determinants of human destiny. Stupidity is always the name of the Other, and it is the sign of the feminine. This course in Critical Psychology follows the work of Friedrich Nietzsche, Gilles Deleuze, and most recently, Avital Ronell, in a philosophical examination of those operations and technologies that we conduct in order to render ourselves uncomprehending. Stupidity, which has been evicted from the philosophical premises and dumbed down by psychometric psychology, has returned in the postmodern discourse against Nation, Self, and Truth and makes itself felt in political life. This course examines stupidity.

This course will examine the character of postcolonial theory in the Afro-Caribbean. Particular attention will be paid to the work of C.L.R. James, Walter Rodney, Franz Fanon, Marcus Garvey, Aime Cesaire, Eric Williams, Kamau Brathwaite, and Bob Marley. The course will also examine Rastafari as a religio-political protest movement. We will chart the musicological development of Reggae and Dub Poetry as distinctive expressions of Rasta.

This course covers the early writings of Michel Foucault, paying particular attention to his psychological writings. The course features a close reading of Foucault’s magnum opus, "Madness and Civilization: A history of madness in the age of reason.”

A close critical reading of the works of Georges Bataille, including The Impossible, The Unfinished System of Nonknowledge, The Accursed Share, On Nietzsche, Story of the Eye, The Dead Man, and Collected Poems.

The Clinical Psychology Laboratory (CPL) provides experiential opportunities for students interested in graduate study in psychology, law, and social justice. Students are given the opportunity to participate in the data analysis of clinical psychological assessments. Students will also participate in research under a Human Studies Committee approved project, with the goal for an early exposure to the field, and with the objective to yield research data for presentation or publication. In some projects, students may have limited opportunities to observe and participate in forensic psychological assessments as prescribed in the respective protocols.

As a Forensic Clinical Psychologist, Professor Griffin conducts psychological evaluations and examinations for both defense and plaintiffs’ attorneys in high profile criminal cases in the Eastern Caribbean. Professor Griffin has extensive experience in serving as a medical expert and an expert witness in a variety of legal systems and currently has an active practice in general clinical psychology.

Griffin, G.A.E. In the Penumbra of the Antillean Hallucination (2017) Small Axe: A Caribbean Platform for Criticism, Issue 53 (to be published July 2017)