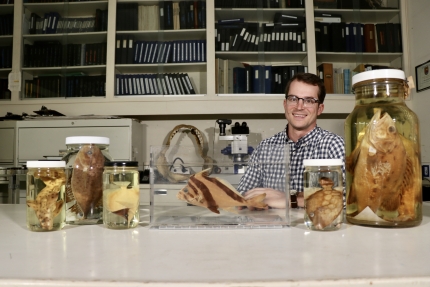 The Spring 2022 Biology Seminar Series continues with a talk from Dr. Bill Ludt, "Missing in the middle: Examining how anti-tropical distributions form in marine fishes." The seminar is on Tuesday, February 22nd, at 12:00pm.

Disjunct distributions of flora and fauna have intrigued biogeographers for centuries and have been central to debates over the roles that dispersal and vicariance have in speciation and evolutionary biology. One of the most notable disjunct distributions is when a single species or closely related taxa are present in temperate or polar regions of both hemispheres, but absent near the equator. Generally referred to as an anti-tropical distribution, this pattern is prevalent in marine systems, occurring across the Tree of Life from single-celled bacteria and radiolarians to algae, many invertebrates, fishes and marine mammals. The abundance of different species that exhibit this distribution pattern has led to a large number of theories on how it is formed and maintained. In this talk we will explore the mechanisms that drive this pattern in marine fishes using population genetic, phylogenomic and ecological niche modelling approaches. Results from distantly related taxa and across several taxonomic scales reveal a complex scenario where it is unlikely that one main mechanism drives this pattern. Additionally, in all groups examined we found the need for taxonomic revision, highlighting the continued need for population and phylogenomic studies, even in common species. Together, the molecular and ecological data used in our studies suggest that multiple mechanisms have acted in concert to create this distribution pattern over time, and that an integrative approach using molecular, ecological and life history data is needed in future studies examining this fascinating biogeographic pattern.

Please reach out to oasin@oxy.edu for Zoom details.