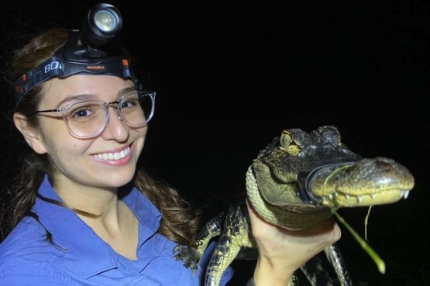 In an increasingly polluted world, contaminants have become a major threat to biological homeostasis and may be eliciting rapid evolutionary responses in exposed wildlife populations. In 1980, Lake Apopka, Florida was the site of a chemical spill releasing thousands of gallons of pesticide mixtures resulting in its classification as a superfund site. These pesticides are persistent organic contaminants that function as endocrine disruptors, affecting steroid hormone levels and signaling resulting in the dysregulation of reproductive development. The exposed native population of American alligators (Alligator mississippiensis) at Lake Apopka have consequently displayed widespread aberrant sexual development, a sharp decline in egg viability, and a drastic decrease in population density following exposure. Surprisingly, the population rebounded a decade later despite the chronic multigenerational persistence of these pesticides in the environment. Regardless of the extensive physiological studies describing the acute and long standing effects of exposure, understanding the roles of evolution and possible adaptive resistance in population recovery at this site remain unknown.

Please reach out to oasin@oxy.edu for Zoom details.