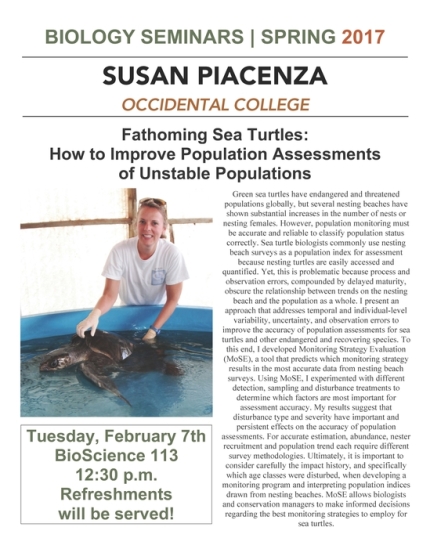 Green sea turtles have endangered and threatened populations globally, but several nesting beaches have shown substantial increases in the number of nests or nesting females. However, population monitoring must be accurate and reliable to classify population status correctly. Sea turtle biologists commonly use nesting beach surveys as a population index for assessment because nesting turtles are easily accessed and quantified. Yet, this is problematic because process and observation errors, compounded by delayed maturity, obscure the relationship between trends on the nesting beach and the population as a whole. I present an approach that addresses temporal and individual-level variability, uncertainty, and observation errors to improve the accuracy of population assessments for sea turtles and other endangered and recovering species. To this end, I developed Monitoring Strategy Evaluation (MoSE), a tool that predicts which monitoring strategy results in the most accurate data from nesting beach surveys. Using MoSE, I experimented with different detection, sampling and disturbance treatments to determine which factors are most important for assessment accuracy. My results suggest that disturbance type and severity have important and persistent effects on the accuracy of population assessments. For accurate estimation, abundance, nester recruitment and population trend each require different survey methodologies. Ultimately, it is important to consider carefully the impact history, and specifically which age classes were disturbed, when developing a monitoring program and interpreting population indices drawn from nesting beaches. MoSE allows biologists and conservation managers to make informed decisions regarding the best monitoring strategies to employ for sea turtles.