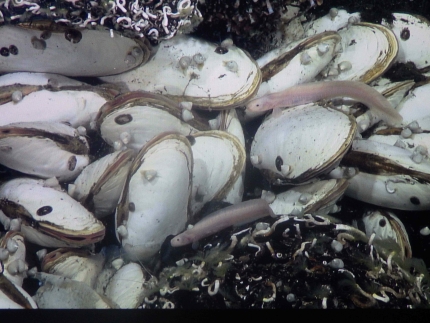 At ~2300m depth, we observed towering chimneys 100 feet tall, billowing 300 degree C water laden with minerals. We also observed large, beautiful and diffusive ‘beehive’ structures that characterized the tops of each chimney. Among the beehive structures lives one of the most heat-tolerant animals in the world - the amazing Alvinella pompejana (known commonly as pompeii worms), which wriggle in and out of their parchment tubes displaying comical feathery gills.  Among them, we noted the beautiful Hesiolyra bergi, an active, and apparently pesky, polychaete that either shares the tubes of Alvinella or muscles in on their turf. Surprisingly, for Hesiolyra, there are only two scientific publications since it’s discovery in 1985. Both of these animals are covered in bacteria, and Alvinella in particular are known to associate with specific bacteria and possibly graze their own body surfaces for nutrition.  We plan to bring both of these worms back to the lab, along with the closely related Alvinella caudata, in order to examine the various bacterial communities associated with these neighboring, but quite different, vent animals. We have also collected eight species of vent gastropods, many that live in and amongst giant clams (appropriately named Calyptogena magnifica). Back at Oxy, we plan to examine them for a specific kind of bacterium (within the family Mollicutes) found, by us and one other research group, to associate with deep-sea snails.  We’re intrigued by the possible ubiquity of this bacterium in deep-sea gastropods. Whether friend or foe to the snail, we do not yet know.

As with all tropical cruises, the sunsets are also spectacular. I’ve attached the best so far. It makes us grateful for the rare opportunity to do such exciting research with an incredible crew, ROV pilots, and group of scientists.  More tomorrow from our next site ~ 3 km away. 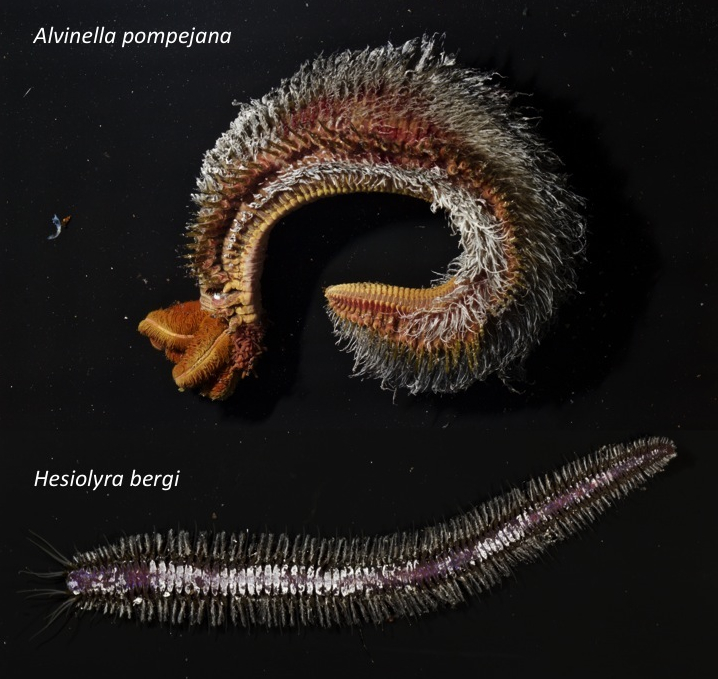 Alvinella pompejana and Hesiolyra bergi, two incredibly beautiful worms that live at hydrothermal vents in the Pacific Ocean. Both animals are covered in thick white and grey filamentous bacteria.

Alvinella tubeworms, in situ in its parchment tube, showing 4 pairs of respiratory gills.