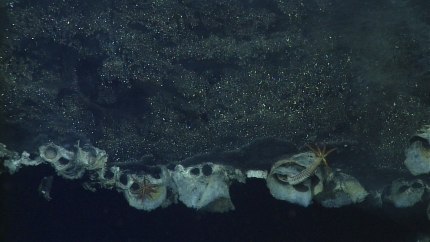 Under one volcano, there was a large flange with an upside-down reflecting pool of hot water, with tube-dwelling Alvinellid polychaetes all around the rim.

We named it Glitter Lake for the fact that glittery pyrite (otherwise known as fools gold), not only lined the worm tubes, but the underneath side of the ‘lake’, which measured 5 feet in diameter, was also covered by it. Photographs do not do it justice, and video was really the only way to capture the swirling surface of the lake – which resembled an eery mist. We decided that the Alvinellid worms should be the new face of deep-sea biology. They are simply adorable, and would make a great stuffed animal. Yet, they are extreme in their love of hot venting fluids. They bother their neighbors often by extending their long fuzzy bacteria-covered bodies into neighboring tubes to explore, or bite, or petrhaps court, and they disappear into their tubes just as quickly – all the while resembling little squirmy jack-in-the-boxes. We spent nearly an hour observing this incredible habitat. We noticed in one area that the alvinellids hang their rear ends out of their tubes, perhaps nourishing their bacterial fur coats with the toxic sulfides emanating from the hot water. These bacteria use hydrogen sulfide, instead of light, as both energy and electrons to drive the conversion of inorganic carbon dioxide in to organic carbon. The worms are thought to eat these bacteria for nutrition and, as with all of the animals in these venting habitats, rely nearly exclusively on energy from the center of the Earth, as opposed to the sun. We are likely the only people ever to see this particular, and truly spectacular, scene on the remote seafloor at 2300 m depth. There are sure to be so many more like it, that defy imagination about what actually lives on this planet.

Alvinellids interacting on the edge of Glitter lake

Glitter Lake from a distance. You can see that the formation is actually a flange, which is trapping the mixed layer between slightly less salty venting water and colder deep-sea water, causing a mirror reflection.

A nearby octopus, which we thought looked as if she was leading an orchestra of crabs.