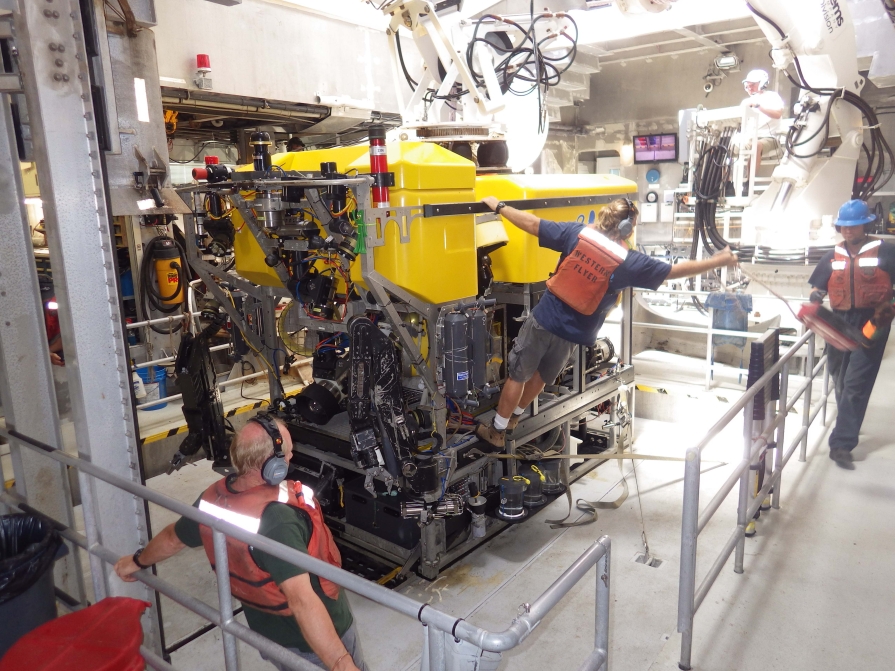 There are 11 scientists on board, all of whom specialize in various aspects of deep-sea biology, ecology, evolution, taxonomy, and microbiology.

The main goal for the expedition is to explore newly-discovered deep hydrothermal vents and seeps in the southern Gulf of California, however today we made the short 2-hour transit to a more shallow site ~ 35miles away at ~410 meters deep. The Alfonso Basin is an area of extremely oxygen-depleted waters (measured as 0.4 umol per liter – approx. 0.2% of the conc of surface waters), which makes it interesting to compare to other sites on the seafloor. This site was explored previously in 2012 by our Chief Scientist Bob Vrijenhoek.

The ROV Doc Ricketts was launched from the moon pool just before lunchtime (above photo), and from the control room we watched it descend for 30 minutes to the seafloor. Upon touchdown we noticed large bacterial mats, and a number of fish, squid, and shrimp. We wondered how the fish survive in such low oxygen. We spent ~ 4 hours exploring the area, taking push cores of sediment and orange and white bacterial mats, and suction sampling for invertebrate larvae in the water column.  Our most unusual observation was strange, but frequent, small mounds in the seafloor filled with sediment that resembled mousse and strangely-shaped

objects, which we could not identify until we got them onboard ship.  They turned out to be the shells of three species of pelagic pteropod, within the family Cavoliniidae, that were somehow being deposited on the seafloor in this area.  We have several new hypotheses about how they got there, but no one idea seems better than the others.

In general, we anticipate discovering new species on this expedition. Very little of the ocean floor has been explored, so it is almost always the case that we discover new animals. When a new species is collected, it must be thoroughly described, from both a morphological and molecular perspective, as well as deposited in a museum (this specimen is called the holotype) and named, using proper latin nomenclature. Naming these animals is the best part, since it can be a

Tonight the ship is headed south to our next destination in the Pescadero Basin.