Established in 2010 in honor of Herman A. Lauter, Professor of Philosophy from 1963-1991, the Lauter Prize in Philosophy is presented annually to the author of the best senior comprehensive paper in philosophy. Our Lauter Prize winners tell us why they chose philosophy and what they plan to do after graduation. 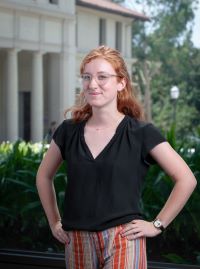 Cléo Charpantier ’19 is a philosophy major planning to pursue a PhD in Philosophy.

I had an unusual high school education and took an introductory philosophy class my senior year, which made me fall in love with philosophy’s big and lofty questions. So I arrived at Occidental already thinking I would minor in philosophy. Then, as I took my first few philosophy classes, I really loved the content and the faculty, so I decided to major in it! And I'm so glad I did.

It’s so hard to pick a favorite, I’ve enjoyed all of my philosophy classes. I took “Philosophy of Race” with Professor Clair Morrissey my sophomore year, which I liked a lot because of the way it challenged both historical and contemporary understandings of race, and because of the way Professor Morrissey pushed us to be critical of our own assumptions. I also really enjoyed our Senior Seminar class taught by Professor Ryan Preston-Roedder and the engaging, deep philosophical discussions we had as a class.

Ethics Bowl with Professor Erica Preston-Roedder stands out because of what a different approach to philosophy it took. Ethics Bowl is a philosophy debate competition of sorts, for which you research 15 contemporary ethical dilemmas and prepare philosophical responses as a team. I loved being able to apply philosophical concepts I’d learned during my time at Oxy to important issues I am passionate about, such as felon voting rights and self-driving cars. It was also great practice in doing philosophy in community with others and working through ethical questions collectively. I grew a lot as a philosopher through this class.

My junior year, I was lucky enough to study abroad in Copenhagen on a DIS Study Abroad in Scandinavia program which emphasized philosophy. While there, I took a class all about Søren Kierkegaard and his extensive body of work. I wrote a research paper about Kierkegaard’s notion of personhood and how it is exemplified through his writing, across his different texts. This was a really interesting project, in part because it was so vastly different from the philosophy I have done at Oxy. It was especially meaningful to work on this while living blocks away from where Kierkegaard was born and bus ride away from where he is buried.

This summer I will be attending the Summer Immersion Program in Philosophy at Brown University, which is a program for minorities within philosophy (which, yep, still includes white women). This program is intended to give participants a taste of graduate school and help them decide whether that is the right next step. I’m strongly considering getting a PhD in philosophy and becoming a professor, and will be applying to graduate programs in the fall. I’m also interested in pursuing politics and public policy. No matter what it is I do, though, I know the values and skills I’ve learned as a philosophy major here at Oxy will shape my work and help me in my aim to contribute to the greater public good. 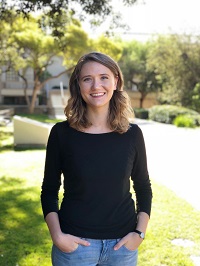 Ari Nord ’18 is a philosophy major planning to go to law school after graduation.

I did not come into Oxy thinking, I am going to major in philosophy. My brother majored in philosophy, and when I heard him talk about it, my reaction was, I would never study that. It sounds so inapplicable and not useful at all. But then I came to Oxy and took different classes. When I took philosophy classes, I was struck by how philosophers perceive different things about the world that you might not think about but are really important, especially why things are set up the way they are. I think I really like the classes because you get to ask questions about the way the world is understood by other people, and you get to challenge that.

What is special about philosophy?

I feel like in every philosophy class when we read these really great papers from philosophers, each one that I read I would be like, Of course! This makes total sense, and the next reading is something completely refuting that person’s argument, and I will be like, Yes, of course. That makes sense. So I think philosophy teaches you to be humble about ideas and also makes you recognize that no matter how much you feel that you endorse an idea, things can always come along and change your mind. It is about always being aware of that and having your mind prepared to adapt to that change.

In my sophomore year, I took “Law and Morality” with Professor Clair Morrissey, and I loved that class because I really loved those ideas. I am more drawn to political and law philosophy: the philosophy of how people interact and how they should interact. As I recognize that people want to be treated in different ways, I start to think about how we could do that for each person and also have systems that regulate billions of people in the most effective way possible. Then this interest just keeps growing as I take more and more classes.

I am planning to go to law school and maybe working for a nonprofit institution after graduation. I was interested in law starting from my first semester at Oxy. I was in a CSP with Professor Thalia Gonzalez in the Politics Department. The class was about rebelling against authority, and a lot of it is about this concept of rebellious lawyering. That was the start of my interest in it. I believe the things I got from being a philosophy major have been helpful to my interest in law: reading very carefully to understand; considering objections to the arguments; developing potential challenges; and thinking about possible answers to those challenges are essential for a philosophy major. It also taught me how to write effectively and clearly and to organize my writing as well. 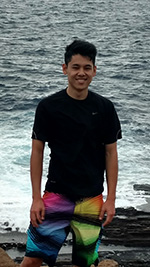 Brad Kawano ’17 is a philosophy major planning to attend medical school after graduation.

How did you decide on philosophy?

When I first came here, I had no idea what I wanted to study. One of my professors told me to take a philosophy class, because it would pair really well with medicine. Initially, I was in the Chemistry Department, but my advisor pushed me to keep taking electives outside of the sciences. So sophomore year, I took Philosophy 101 with Professor Saul Traiger. He told me to take “Practical Ethics” with Professor Marcia Homiak and “Environmental Ethics” with Professor Clair Morrissey, and this was the semester that got me on track with philosophy. It was in these classes, especially “Environmental Ethics,” that I knew philosophy was what I wanted to study.

Both Professor Homiak and Professor Morrissey, especially, have really taught me to be precise in my writing and form a coherent argument. “Environmental Ethics” was all about learning how to write with precision.

How has philosophy played a role in your journey to medical school?

I knew that I wouldn’t know every technical detail on the MCAT, but I had enough. What philosophy has helped me in is being able to pick up on what the question is asking for. Being able to do that quickly is invaluable. If you can keep track of Descartes, you can very easily read a short passage on biochemistry.

A lot of medical school applications want to know how you are going to enrich the diversity of the student body, and being able to pick out what they mean by that and show how you are different in a short response is invaluable. I have learned to pull out the important details about myself and show them to an application committee.

Can you talk about your research abroad and on campus?

Since sophomore year, I have been doing research in the Chemistry Department. I went to Nicaragua for a summer to do research and worked at the local clinic, working in the community. Some of the projects I proposed were programs for people in the community to have access to information on health. Trying to set up partnership programs where older diabetic patients get set up with older diabetic patients. The whole project took a solid year to pull together — contacting the foundation, completing the literature review, and getting the project approved.

What do you see yourself doing in the future?

Ideally, I would get my M.D. and a Master’s in Public Health or Health and Humanities and continue what I was doing in Nicaragua. I want to be able to do research in the local community that I am studying and be an advocate. Philosophy has really helped me get a sense of what I want to be doing and how to use a medical degree in the future. I think philosophy has also been useful for finding a niche to pursue. That is one of the great things about philosophy is that you can study it in so many different ways, and being able to own your ideas and being able to do that is rare.