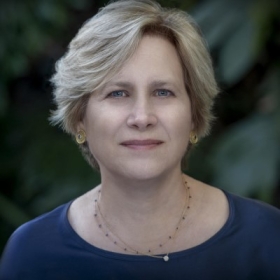 On leave as the Mellon Professor at the American Academy in Rome until fall 2024.

A specialist in questions of dictatorship and genocide in the modern era, Marla Stone's work emphasizes the relationship among culture, politics, and the state in the 20th century.

Professor Marla Stone is professor of history at Occidental College where she served as Department Chair from 2000-2004 and 2015-2019. For the 2021-2024 academic years, she will be the Andrew W. Mellon Professor of the Humanities at the American Academy in Rome.

A specialist the history of fascism and in questions of dictatorship and genocide in the modern era, Professor Stone’s work emphasizes in particular the relationship among culture, politics, and the state in the 20th century. She has published on a variety of topics in European history, including Italian Fascist cultural politics, anti-communism, the contemporary far right in Europe, Italian Holocaust memory culture, and the role of the American media in forging public consent for NATO intervention in Bosnia. In addition to Italian history, Professor Stone publishes and teaches in the field of genocide studies. Professor Stone is the author of The Patron State: Culture and Politics in Fascist Italy (Princeton University Press, 1998), When the Wall Came Down: Responses to German Reunification (edited with Harold James, Routledge, 1993), and The Fascist Revolution: Society, Politics and Culture in Mussolini’s Italy (Bedford/St. Martin’s, 2012). The Patron State was awarded the Howard Marraro prize for best book in Italian history by the Society for Italian Historical Studies in 2000.

Professor Stone has been a fellow at the European University Institute (2017), the Center for Advanced Study in the Behavioral Sciences at Stanford University (2011/2012), the Shelby Cullom Davis Center for Historical Studies at Princeton University (2007), the American Academy in Rome (1995/1996), and the Wolfsonian Foundation (1995). Her research has also been supported by the Gladys Kreible Delmas Foundation, the Italian Academy at Columbia University and the Eli Lilly Foundation.

Professor Stone is writing a book-length study of the role of anti-Communism in Italian politics and culture from Fascism through the First Republic entitled, The Enemy: The Politics and Propaganda of Anti-Communism in Italy. She has taught at Occidental College since 1994 and received her M.A. and Ph.D. from Princeton University.

The Enemy: The Politics and Propaganda of Anti-communism in Italy (in progress).

The Fascist Revolution, The Bedford Series in History and Culture, Bedford/St. Martins, 2012.

“What Have We Learned from Culture: The Turn to Culture in Fascist Historical Studies,” ¨, Mikkel Bolt Rasmussen and Jacob Wamberg, eds., Editions Tuscalanum, 2010.

“Primo Levi, The Truce, and the Politics of Holocaust Representation,” The Legacy of Primo Levi, Stanislao Pugliese, ed., Palgrave/Macmillan, 2005.

“Challenging Cultural Categories: The Transformation of the Venice Biennale Under Fascism,” Journal of Modern Italian Studies, Vol. 4, No. 2, 1999.

“The Left and Kosovo,” co-authored with Josh Wick, Tikkun, July/August 1999.

“Staging Fascism: The Show of the Fascist Revolution,” Journal of Contemporary History, Vol. 28, No. 2, April 1993.

Darrio Gaggio, The Shaping of Tuscany: Landscape and Society between Tradition and Modernity, Journal of Modern History, Vol. 90, no. 3, September 2018.

Reading Between the Lines in Schindler’s List, Tikkun, November/December 1998.

Ester DaCosta Meyer, The Work of Antonio Sant’Elia, Journal of the Society of Architectural Historians, Vol. 56, No. 3, September 1997.

David Kertzer, Sacrificed for Honor, Journal of the History of Sexuality, Vol. 5, No. 4, April 1995.

Chair, Research Network on the Historical Study of States and Regimes, Council for European Studies, 2014 – 2017

Faculty representative to the Occidental College Board of Trustees, 2013 – 2016

Executive Board of the Society of Italian Historical Studies, 2012 – present

Chair, Search Committee for a Historian of the Middle East, Occidental College, 2008 – 2009

Television Commentator on the Bosnian War and the Kosovo War for KCAL, Channel 9 and Fox 11 in Los Angeles and the Fox Cable News Network in New York, 1994, 1995 and 1999.

“The Revolt Against Tolerance and Democracy: National Populism and the Far Right in Italy,” Scripps College, September 20, 2018.

“Anti-Communism from Dictatorship to Democracy: The Italian Case,” Jacob Talmon Annual Lecture, The Hebrew University in Jerusalem, Jerusalem, May 11, 2017.

“The End of the World As We Know It? The Global Rise of National Populisms,” The Ralph Bunche Institute for International Studies, The Graduate Center, City University of New York, December 8, 2016.

“Historians Look Ahead,” Center for Advanced Studies in the Behavorial Sciences, October 12, 2011

“An American Perspective on 1848: Margaret Fuller and the Roman Revolution,” National Endowment for the Humanities, Rome, December 4, 2011.

“The Art of War: The Exhibition of Italian Soldier-Artists,” City University of New York, October 28, 2011.

“The Communist in the Fascist Imaginary: From Defeated Internal Enemy to Global Threat,” Columbia Seminar in Modern Italian Studies, April 3, 2009.

“When Memory Shapes Policy: Bosnia Through the Lens of the Holocaust,” Bellarmine Forum on Violence and Society, Loyola Marymount University, November 10, 2004.

“Fascism and the Cult of Romanità,” National Endowment for the Humanities Summer Seminar, American Academy in Rome, Rome, Italy, July 5, 2004.

“The Past in the Present,” European Fascism Symposium, Trinity College, Hartford, CT, October 16, 1999.

“Kosovo: The Meanings of Ethnic Cleansing,” University of California, Irvine, May 11, 1999.

“Kosovo, Bosnia and the Holocaust: The Power of Historical Analogy,” Jewish Studies Lecture Series, University of California, Los Angeles, May 10, 1999.

“Challenging the Social Boundaries of Culture,” American Academy in Rome, Rome, Italy, May 9, 1996.

“If Not for the March on Rome, There Would Be No March on Moscow,” American Historical Association, January 7, 2012.

Roundtable with author on Kristin Monroe’s Hand of Compassion: Rescuers and the Holocaust, Social Science History Association, Portland , OR, November 4, 2005.

“From Mothers to Goddesses: Representations of Women in Fascist Art,” Women, Gender and the Extreme Right in Europe, University of Cardiff, Wales, July 1, 2001.

“Between Perpetrators and Victims: Film and the Holocaust in Italy,” American Association of Italian Studies, New York, NY, April 12, 2000.

History of the Mediterranean
Comparative Fascism & Authoritarianism
Modern Italy from the Rise of the National Idea to the Present
Official Culture and Its Discontents: Art and the State
Italian Fascism: Politics, Society, and Culture
The Age of the Dictators: Fascism and Nazism
Culture and Dictatorship in the Twentieth Century
The Holocaust: History and Memory
Modern Europe Since 1914
Modern European Cultural History
The Crisis of Interwar Europe, 1914 – 1945
European Diplomatic History
Europe since the Reformation
The Great Depression