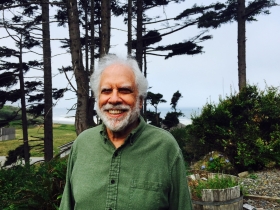 Robert Gottlieb’s research focus is on environmental and food justice, care politics, power and inequality, resource politics, alternative transportation, place-based development, global cities, and the infrastructure of everyday life.  He is the author of numerous publications, including fourteen books. His new book, Care-Centered Politics, is now available. A few of the publications are described below. Professor Gottlieb delivered the Graham M. Sterling Memorial Lecture in 2014 and received the Carey McWilliams Lifetime Achievement Award from the California Studies Association in 2015. He is also the editor of two MIT Press series, "Urban and Industrial Environments" and "Food, Health, and Environment," with nearly 100 titles in the series published since 1997 after he transitioned from UCLA to Occidental. You can see this 2015 video about his work at https://www.youtube.com/watch?v=lpWDKRpt94o. A long time environmental and social justice activist, Professor Gottlieb has been engaged in researching and participating in social movements for more than 60 years.

** Forcing the Spring: The Transformation of the American Environmental Movement (Island Press, 2006)

** Empires in the Sun: The Rise of the New American West (with Peter Wiley) (University of Arizona Press, 1985)