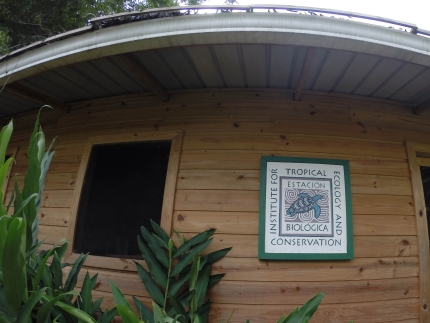 Greetings from Panama! Today was yet another day of travelling, beginning at Ditsowu and ending at ITEC. Our kind hosts at Ditsowu packed us sack lunches (which turned out to be spirit lifting later in the day) and sent us on our way early. We arrived at the Costa Rican border merely an hour later and began the process of hoop jumping, stamping, and paying the fees required to leave Costa Rica. After getting all of our ducks in a row, we crossed a bridge, MacGyvered out of an old train track covered by boards of wood (which is, apparently, significantly less sketchy now than when Claisse traversed it in the 90s, back when semi-trucks and pedestrians shared the same bridge, minus the wooden boards). Sweaty and tired, with sore backs and heavy packs, we crossed into Panama. Upon arrival after our short (but, in my opinion, frightening) bridge crossing, we had more hoops for the jumping, more money for the paying, and more stamps for the getting. This process was even more sweat-inducing because the temperature seemed to increase drastically after entering Panama. Was it all in our minds? The world may never know. After a long wait for our bus driver to get his papers in order (and many fervent prayers on our parts for José to hurry up), we were welcomed back onto the air conditioned bus and were on our way once

again. After a brief grocery run and some empty hopes for some stolen wifi, we made it to the dock where our boat was waiting to pick us up for ITEC. One quick note on the drive to the dock: it felt very much like a roller coaster ride because José, like many of the Costa Rican drivers that we encountered, did not care much for speed limits or double yellow lines, so we arrived at the dock much faster than expected and with a little more adrenaline in our systems than anticipated. Our boat ride was a fast, bumpy ride between and among mangrove, and before we knew it we were at the dock of ITEC.

ITEC currently consists of five buildings, one of which is still in the beginning construction phases and the rest of which are still somewhat unfinished. There is a main building that houses the kitchen and common area/makeshift classroom, fitted with a wall-to-floor bookshelf, cards, Monopoly, Scrabble, a hammock, and lots of comfy looking (though, in reality, not so comfy) chairs. Our dormitory is a short walk away and has a lovely view of the pastures and encroaching wet forests. We threw our packs down, set up our mosquito nets about our beds, and dressed for our first excursion out to the coral reefs.

Full disclosure: I am a terrestrial biologist. I have been snorkeling (excluding snorkeling in my 6 foot deep pool with my brothers, shout out to Drew and Taylor!) a grand total of once. Needless to say, I was jazzed about jumping into the water. I can’t speak for the whole group, but it seemed like everyone aboard had a similar level of excitement, either because they were nervously anticipating repeating the mantra "don’t breathe through my nose, don’t breathe through my nose, don’t breathe through my nose…" (I was definitely in this group) or because they were itching to return to the sea after a long fore on land with only a brief jaunt in the ocean at Pacuare. Again, I can’t speak for everyone, so I will speak for myself: IT WAS AWESOME. As a terrestrial biologist, this was an enlightening, albeit brief, experience. I have been raised in academia with the understanding that coral reefs are some of the most diverse ecosystems on the planet, along with tropical forests like La Selva’s. This is a fact that I knew well and could recite at the drop of a dime, like I was raised in Brave New World, but that I could not yet fully understand. In half an hour of snorkeling on a small, sheltered, shallow reef, I began to understand this fact beyond a superficial level. I came out of the water grinning ear to ear, feeling nerdier every moment, and itching to

get back into the water. (Oxy Confession: I squealed at the first five or so sponge brittle stars that I saw because they are so darn cute. They hug sponges and corals with spindly little hairy arms and they hold a special place in my heart.) (Another Oxy Confession: I forgot just about every fish species that I saw. Good thing I brought my flash cards. Don’t tell Claisse…). The ten students that went on that snorkel trip rejoined the rest and enjoyed a lovely dinner in the multipurpose book and hammock-filled room.

Later that night we got an orientation from Pete, the founder of ITEC. He shared some of his academic background that led him to set up ITEC in Panama and gave us stern warnings about scorpions, human bot flies, fer-de-lances, and other matter of dangerous (and potentially deadly, though more likely just very uncomfortable) things to be aware of here. He also informed us that, much to his surprise, some internet guys established wifi here a mere two hours before we pulled up to the dock. So we have internet! There was much rejoicing. We were also cautioned that the power only goes on for an hour in the mornings and about three hours in the evening, all from a noisy generator next to the kitchen. We were further cautioned to be extremely careful with our water use because it is all gray water, with the exception of the filtered drinking water. Thus their water supply relies solely on the rain, which can be fickle some weeks and leave them with dry taps if they are not careful. So daily showers (to which we had grown accustomed as a way to clean off the day’s sweat, sunscreen, and bug spray and as a way to prevent bot flies) will be replaced with daily swims in the ocean. It’s really not a bad trade-off.

We ended our day with the 15 minute warning from Pete that the power was going to be turned off soon, giving us precious little time to clean up the common area, brush our teeth, pack up our laundry (because we are shipping it out tomorrow to be washed and remove that unique blue cheese smell from our clothes), and get changed before we relied on our headlamps for light. After lights went out, the rain began and we said goodbye to a long day of travel and new experiences from within our net covered beds.