Freshman Rep. Demion Clinco '02 attended a reception at the White House with the Obamas after standing up for gay rights. But jumpstarting the state's economy is his main agenda

Demion Clinco '02 did not enter politics to advocate for LGBT rights. Historic preservation and economic development are his passions. But back in February—barely two weeks into his tenure as a lawmaker—the Arizona state Senate passed a bill (SB 1062) that would allow businesses to refuse to serve gay customers. And when the bill entered the House for debate, "I just did what I thought was the right thing to do," he says. 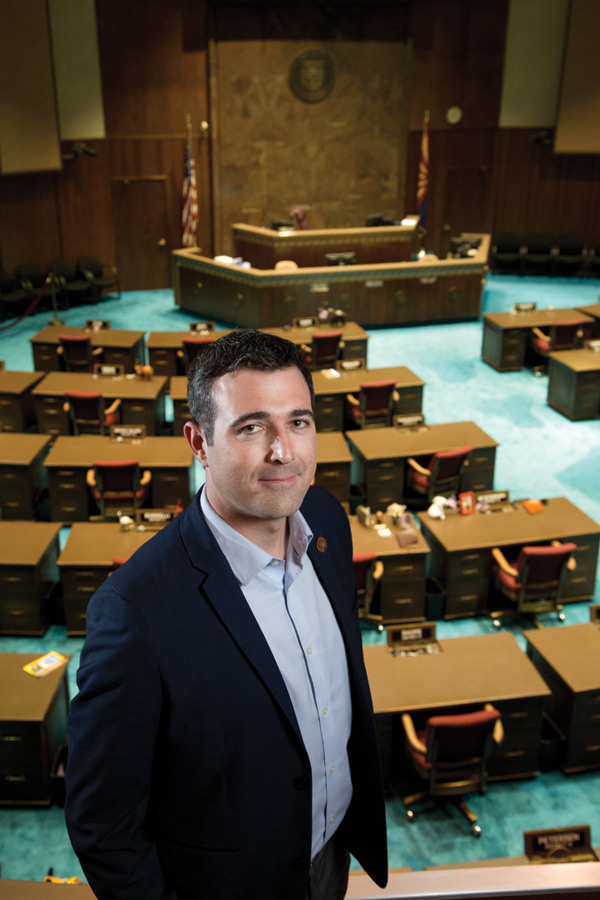 "I was born in Arizona, and I have lived here for 33 years—never have I been so disgraced by this community and this state," the Tucson Democrat told his fellow lawmakers. "I believe I'm the only openly gay member of this House of Representatives, and so it's pretty appalling to hear a dialogue about using religion to discriminate against both myself and my community."

Professionally or philanthropically, "My sexuality isn't a defining characteristic of who I am," Clinco explains. "I would hope that anybody in that position would stand up against any law that is going to sanction discrimination, and say this is outrageous. It's un-American, and it's certainly un-Arizonan. It's disappointing to see such legislation appear on a national stage, and disturbing to see my colleagues take a passive stance."

Despite his impassioned argument, the bill passed the House by a 33-27 vote and moved to Gov. Jan Brewer's desk, where it sat for six days. Brewer ultimately vetoed the bill, saying: "Religious liberty is a core American and Arizona value. So is non-discrimination." But the ensuing national attention landed Clinco on CNN (and, on June 30, in the White House for the LGBT Pride Month reception—where President Barack Obama '83 acknowledged Lawrence Goldyn, onetime assistant professor of political science at Oxy and an openly gay activist, for shaping his thoughts about gay rights issues).

Clinco did not expect such a trial-by-fire beginning to his political career. He was appointed to the House on February 4 by the Pima County Board of Supervisors to fill a vacant seat in District 2. An art history major at Occidental, he first got his taste of politics as an advocate for historic preservation.

After moving back to Arizona following grad school in Milan, Clinco worked on getting an Adobe Expressionist structure listed on the National Register of Historic Places. "It was a really fun and interesting project," says Clinco, who at one time flipped houses as a hobby. It also got him interested in the policy side of preservation: How are these designations determined? Which properties are chosen, and why? He began doing more preservation projects in southern Arizona, and then got appointed to the Tucson Historic Preservation Foundation.

"There were a number of people in the community who became involved," he says. "We did more and more civic projects around preserving historic resources, to really try to sort of re-spark interest in neglected areas of the city. Then I got more interested in the issue on a statewide level."

In doing the historic preservation work, Clinco became perturbed by what he saw as a lack of business opportunities in his home state. "We have a system in southern Arizona that doesn't encourage entrepreneurship," he says. "I'm frustrated that we're not building and innovating here, and young people who grew up here are leaving and creating new businesses elsewhere."

When Rep. Andrea Dalessandro vacated her seat to replace retiring Sen. Linda Lopez, Clinco was encouraged by other elected members of the Legislature to apply. Despite his frustrations with the system, "I have a tremendous optimism for this part of the country and this state," he says. "So I put my hat into the ring."

Getting into politics actually brought Clinco full circle to his arrival at Oxy, where he intended to major in politics. But his first week on campus, his adviser in the politics department told him he didn't think he was cut out for the major, and nudged him toward other interests. "My adviser told me I would be a better fit in the art history department," Clinco recalls. Over the next four years, "I only took one or two political science classes."

But even within his new major, Clinco's aptitude for organizing rose to the forefront. "I recall long meetings with Demion in my office where we talked about all sorts of things," says Eric Frank, professor of art history and the visual arts, who became Clinco's adviser. "But what I remember in a striking way was his suggesting Oxy's first senior art history symposium—and then making sure it happened."

At that time, Frank explains, there was no systematic, College-wide expectation of oral presentations, where graduating seniors presented versions of their comprehensive projects in a formal setting. "I vividly remember how focused Demion was on organizing this for his fellow seniors, and how strongly he felt that it should be a public event, including a reception, to display the intellectual accomplishments of his student colleagues," Frank says. Since then, the senior art history symposium has grown into a formal event held in the Braun Room of the library with a catered reception that this year "was standing room only," Frank notes.

In hindsight, Clinco has no regrets about switching majors. Under Frank's guidance, he spent a semester abroad in Parma and then returned to Italy to complete a program with the Guggenheim in Venice. He later went back again for a post-graduate program in design at Istituto Marangoni in Milan. His interest began with Renaissance art and morphed into a fascination with modern Italian art and fashion design.

"Oxy gave me such a good foundation," he says. "Linda Lyke, Linda Besemer, Amy Lyford—that group of professors was just so wonderful, and really took the time to make sure I had a tremendous experience. One of the things I loved about Oxy was the breadth of classes. Every class I took was just so interesting and engaging and intellectually stimulating. It really prepared me for all the things I'm doing," Clinco says. That includes giving him the confidence to speak out—no small challenge for someone who was bullied as a child for a speech impediment, and who also struggled with dyslexia.

After Clinco addressed the House about SB 1062, he called Michelle Yacoob '02, one of his best friends since their freshman year at Oxy. "It took a lot of courage," she says. "He couldn't even believe he did it. He said it felt like someone else had taken over. He was just so angry and outraged. Whether he made friends or enemies that day, he didn't care. Demion's always been himself. And he's always defended the underdog."

"I was taken aback by how quickly the story exploded on the national stage," Clinco says. "The amount of support communication that came in from around the world was really remarkable. It was really moving to get communication from people from other countries where being part of an LGBT community has significant consequences. People talked about how it was inspiring for them to watch. I just did what I thought was the right thing to do. I didn't expect it to impact people the way it did."

Still, it was anxiety-provoking for the freshman lawmaker to stick his neck out. "The hardest part about standing up is knowing how conservative Arizona and its legislature are," Clinco says. "I hadn't had time to build meaningful relationships with people, and I didn't know how they would react. It was a strange introduction to Arizona politics, and politics on a national level."

Clinco also doesn't want to be pigeonholed as "the gay legislator." "I didn't go into politics to have it not be part of my political agenda—I was just taken aback by how quickly it became the center of the narrative," he says. His focus right now is economic development.

"I'm working on a historic designation tax credit that could jumpstart economic development on our rural main streets," he says—and not just in his own district. "It's important to me to work on all of our state. How we can incentivize development and investment in the rural part of our state?" He is currently the sponsor of House Bill 2696, which would give preference to Arizona companies when bidding on state contracts.

Other issues "arise all the time," he says, pointing to 1,000 Mexican youths who are currently being held in Nogales after crossing the border illegally. "A colleague and I insisted on touring the facilities. I've never seen a more clear and cogent call for comprehensive immigration reform. These kids crossing without adults are being detained in record numbers. It's really shocking."

Child welfare is another area Clinco is interested in improving. "We have a dismal education system," he says, noting that Arizona ranks 49th nationally in spending per student. "How do you craft an economic environment where young people want to stay, where kids are educated and become a dynamic workforce for the future?"

Away from the Legislature—which meets for 100 days each year between January and April—Clinco helps run his family's home healthcare business, Catalina In-Home Ser­vices; continues to head the Tucson Historic Preservation Foundation; and is CEO of Frontier Consulting Group, which researches and prepares applications for historic preservation projects. He shares his Tucson home with a formerly stray cat, Helios.

"Demion's the most passionate, intelligent person I know," Yacoob says of her onetime Escarpa Drive housemate (a whiz at interior decorating, Clinco "threw the best theme parties"). "He chooses his words very carefully—a communication skill that many politicians haven't mastered. He manages to tell the truth in a soft way and have a very loud impact. Arizona's lucky to have him."

After a bumpy takeoff, Clinco's political career has taken flight. He will be running for reelection in the fall, and, given the way everything has gone so far, he is optimistic about the future. "I wouldn't be running if I didn't think there was real opportunity to effect change in this community and this state and perhaps broader. I think I can make a good and positive change for this state."

Yacoob thinks her friend will go far: "He's very much loved by everyone he meets, and if they don't love him it's because he threatens them in some way, ethically or morally," she says. "I knew Demion would reach incredible heights, but I just couldn't imagine that he would be representing Oxy at the White House."