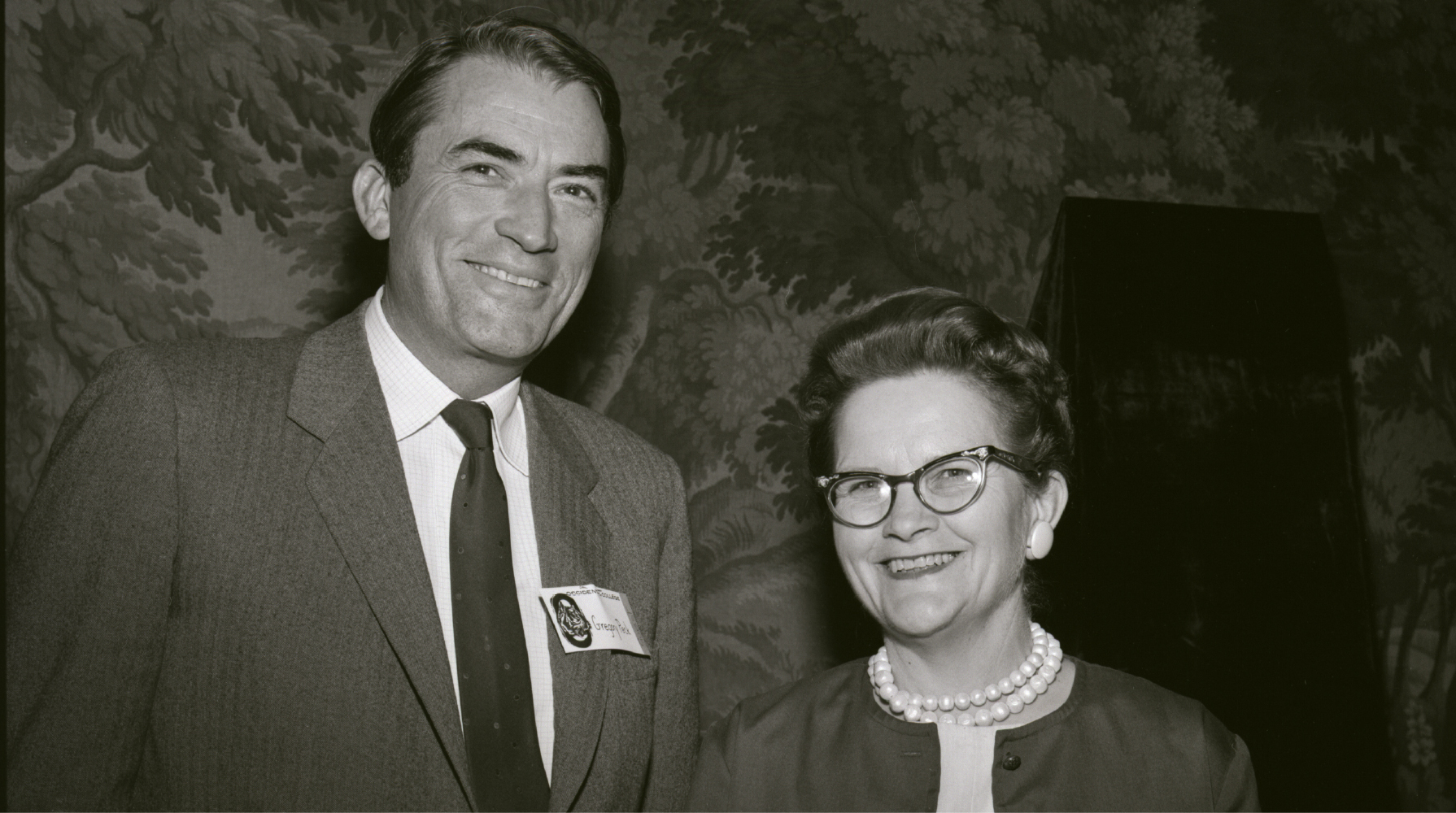 So you think you know Oxy? Take our little quiz—we're not keeping score—and you might be surprised about some things you never learned

1. "Io Triumphe!" was introduced into the Oxy lexicon in 1905, but it's not native to the College. What school originated the nonsensical cheer?
A) Princeton
B) Albion College
C) University of Mississippi
D) Towson University 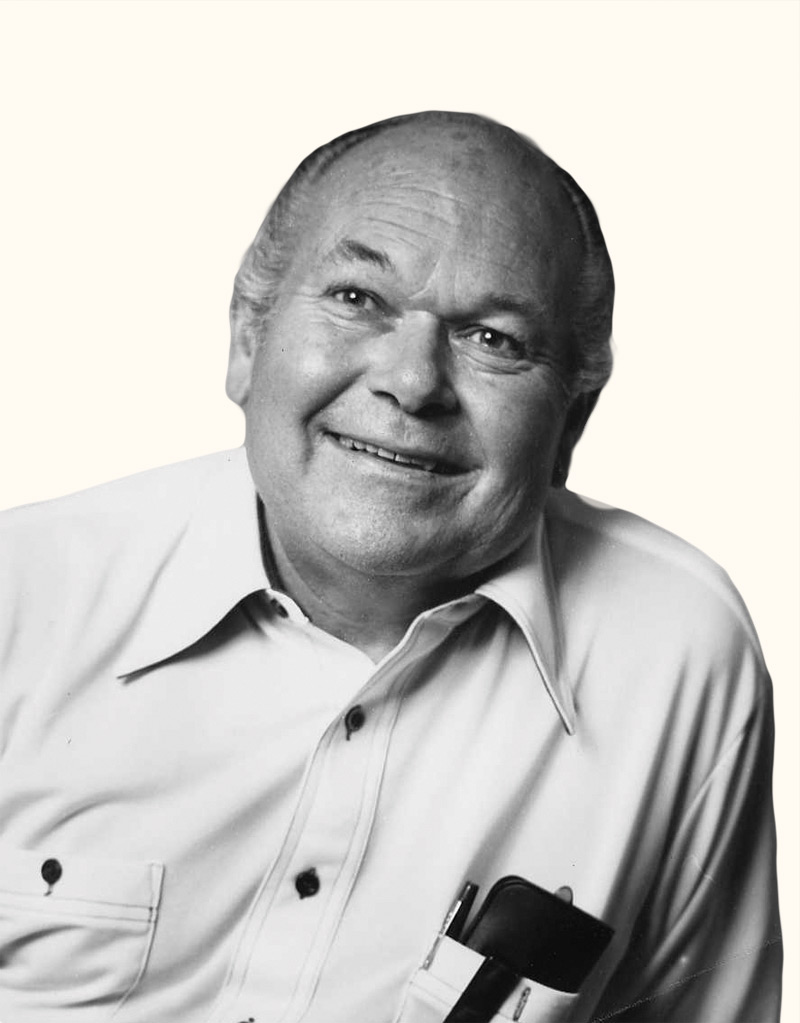 2. Which of the following playwrights was the favorite of professor of drama emeritus Omar Paxson '48?
A) Gilbert & Sullivan
B) William Shakespeare
C) George Bernard Shaw
D) Samuel Beckett

3. When Eagle Rock High School teacher Howard Swan was hired in 1934 to conduct the Men's and Women's Glee Clubs at Occidental, he was offered a salary of $40 a month. Where did the money come from?
A) The sale of Glee Club 78s
B) President Remsen Bird's discretionary fund
C) Proceeds from the College bookstore
D) The College's athletics budget 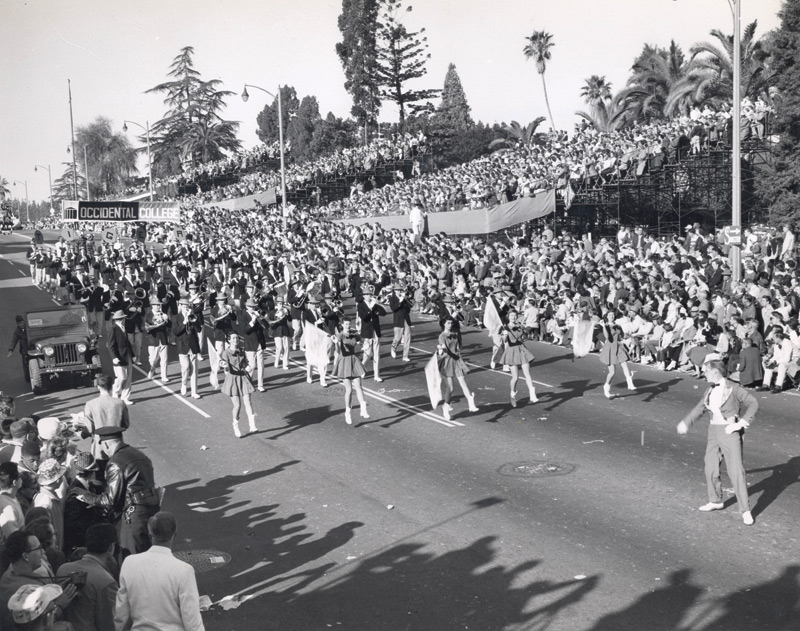 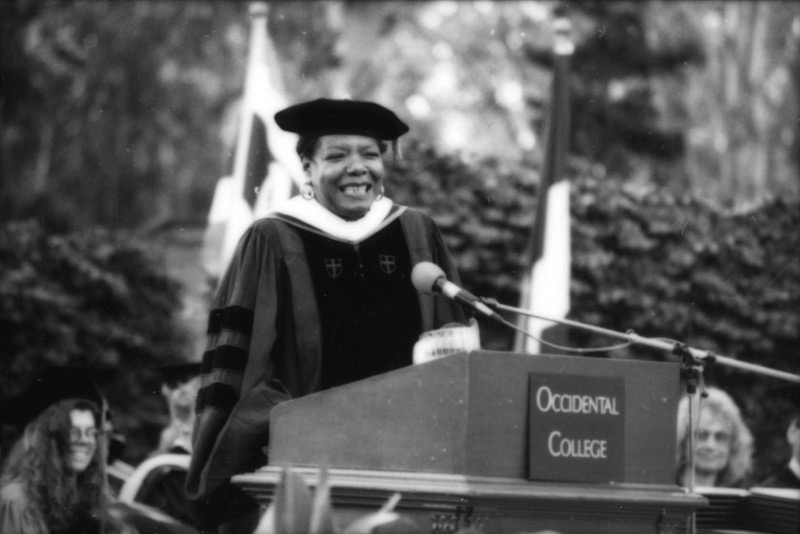 5. Match the Commencement quote to the speaker.
A) "As a kid I was always telling my buddies I was a philosopher. And now, finally, somebody believes me."
B) "Courage is the most important of all the virtues—because without courage, you cannot practice any other virtue with consistency."
C) "I believe the world is incomprehensibly beautiful—an endless prospect of magic and wonder. Whatever mess we observe is our own responsibility!"
D) "Many or most of you—if the worst doesn't happen—will live to the year 2000. … Will we be flying to the Moon—or Venus—and who will the Venetians [sic] turn out to be?" 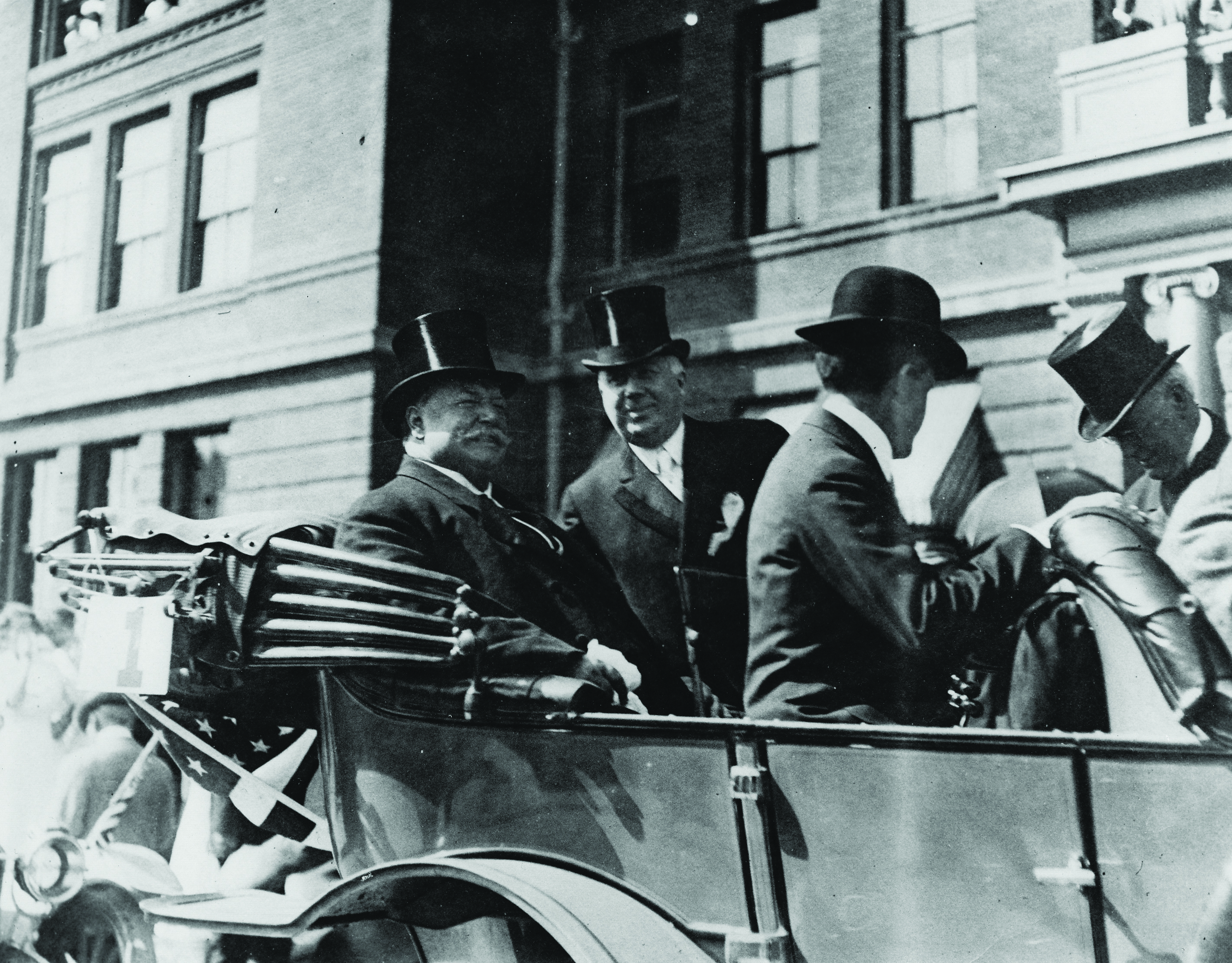 7. An October 1911 visit to Oxy's Highland Park campus by plus-size president Howard Taft necessitated a special chair to accommodate him. What renowned furniture manufacturer made and later gave the mahogany and leather chair to the College?
A) Barker Bros.
B) Dunbar
C) Gustav Stickley
D) Ikea 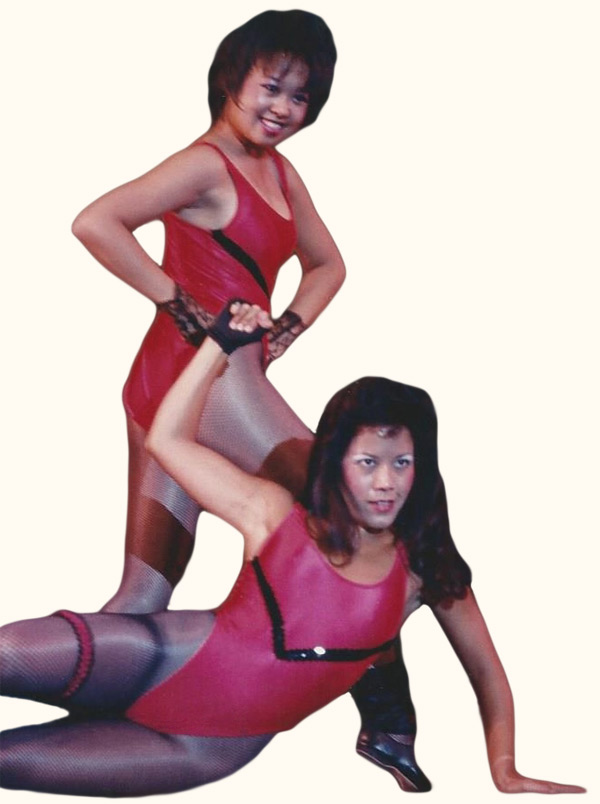 9. Where did Oswald get his name?
A) From his mother
B) Mathematician Oswald Veblen
C) President Remsen Bird
D) Oxy students 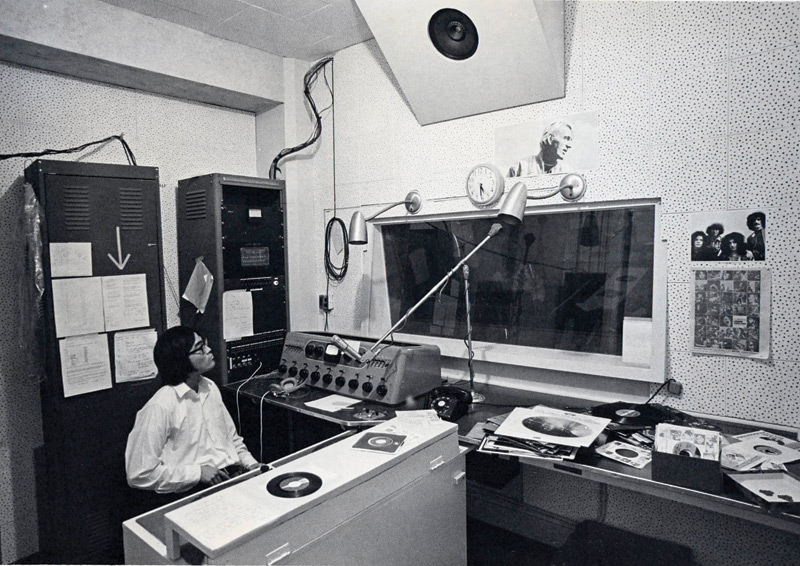 11. In its original incarnation, campus radio station KOXY had a different set of call letters. What were they?
A) KAGC
B) KIOT
C) KTGR
D) KYO

13. Don Carpenter '39 enjoyed a brief burst of notoriety by achieving what national championship on the lawn of the ATO house?
A) Tree sitting
B) Goldfish gulping
C) Pogo sticking
D) Jitterbugging

14. M.F.K. Fisher '31 is among the most beloved food writers of all time, and her books remain in circulation today. Which of the following was not written by Fisher?
A) Serve It Forth
B) Consider the Oyster
C) With or Without
D) How to Cook a Wolf

15. On a weekend getaway to Catalina in October 1937, Martha Stanley '38 (an Alpha Kappa) and Barbara Garrison '38 (a Delta Gamma) reeled in a pair of big fish—catching the eye of an Acme News Pictures photographer. (Oh, the things we find on eBay.) What kind of fish are they holding?
A) Halibut
B) Mackerel
C) Yellowfin tuna
D) White sea bass

18. As producers, directors, and even subjects, Oxy has produced multiple Academy Award winners in the Best Documentary Film category. Match the alumnus or alumna to their film.
A) Richard Farsons '47
B) Caitrin Rogers '04
C) Dennis Patrick '73
D) Marcel Ophuls '50

1. Hôtel Terminus: The Life and Times of Klaus Barbie
2. March of the Penguins
3. Journey Into Self
4. 20 Feet From Stardom

19. Barack Obama '83 lived in Haines when he was an Oxy student. Which residence hall did Ben Affleck '95 live in?
A) Newcomb
B) Stearns
C) Wylie
D) Bell-Young

20. What California landmark was recognized by the U.S. Forest Service after a group of Oxy students led by 1905 graduate Percy "Pete" Goodell built a trail connecting it to Mount Wilson in 1915?
A) Occidental Peak
B) Goodell Heights
C) Mount Oxy
D) Ego Rock

23. Which of the following started out as a project in Derek Shearer's Urban Business class in the early 1980s?
A) The Women of Oxy calendar
B) The Men of Oxy calendar
C) The Sidetrack Cafe
D) The Occidental Bookstore catalog

Round 3: O'er Our Foes Victorious

25. Whose shoes were bronzed and turned into a trophy that Occidental and Whittier have been playing for since 1946?
A) Whittier running back Myron Claxton
B) Oxy halfback Glenn Groves '39
C) Tigers coach Roy Dennis '33
D) College registrar Florence Brady 1919

26. Which of the following teams did Jack Kemp '57 not play for?
A) Detroit Lions
B) Pittsburgh Steelers
C) Calgary Stampeders
D) Los Angeles Chargers

33. 1910 graduate Fred Thomson, who parlayed amateur athletics success into a career as one of the most popular movie cowboys of the silent era, died of a tetanus infection at age 38 on Christmas Day 1928. His horse, Silver King, continued to make movies. What was his final screen appearance?
A) Pals of the West (1934)
B) Carrying the Mail (1934)
C) The Lone Ranger (1938)
D) The Terror of Tiny Town (1938)

36. In 2011, Olin Browne '81 became only the fifth professional golfer to notch career wins on the PGA's developmental tour, the PGA Tour, and the PGA Champions circuit. Which of the five senior majors did he win that year?
A) The Tradition
B) Senior PGA Championship
C) U.S. Senior Open
D) Senior Players Championship
E) Senior British Open Championship

41. Oxy's popularity as a film location is well documented, but it's also a go-to destination for national advertisers. Which recent national campaign featured this image?
A) Best Buy
B) Samsung Galaxy
C) NCAA
D) Pepsi

42. In 1967, the wife of a beloved American singer donated a collection of sheet music and operatic scores annotated by her husband to the College. Who was the singer?
A) Nelson Eddy
B) Eddie Cantor
C) Lawrence Tibbett
D) Vaughn Monroe

44. Which of the following namesake beverages is not served at the Green Bean?
A) Green Dynamite, after the Leonard Green Family
B) The Studenmaker, after Oxy professor Woody Studenmund
C) To Veitch Their Own, after President Jonathan Veitch
D) Skotcheim, after President Emeritus Robert A. Skotheim

46. Which of the following is not grown in Oxy's FEAST garden?
A) Carrots
B) Cauliflower
C) Celery
D) Corn

47. Prior to his academic career, Jonathan Veitch was an extra in a number of Hollywood productions. Which of the following did not contain the college-age thespian?
A) "Charlie's Angels"
B) "Fantasy Island"
C) Harold Robbins' The Pirate
D) Thank God It's Friday

48. After new dumpsters were placed around the Occidental campus recently, Oxy's Dumpster Art Committee sponsored a pair of campuswide competitions to turn these mobile garbage bins into works of art. Match each dumpster to its location on campus.
1. Bioscience Building
2. Pauley Hall
3. Thorne and Booth halls
4. Tiger Cooler

Trivial Pursuits: How did you do?

1) B. Albion College in Albion, Mich., another school renowned for its squirrel population. Written by the Class of 1900, "Some of its phrases were taken from other college yells, some from a Greek play that had been presented on campus during that period, and others were borrowed from the poems of the Roman writer Horace," according to the Albion website.

2) C. Shaw, although Gilbert & Sullivan and Shakespeare were also staples of Oxy Summer Theater productions. (Omar was known to have a distaste for Beckett.)

4) B. The 1993 Alumni Association entry was titled "Everything is coming up roses."

6) A. In 1911, students and alumni of both sexes rallied and persuaded the Board of Trustees to reverse its decision to turn Oxy into an all-male school. It was Oxy's first major protest.

7) A. Barker Bros., founded in 1880 by O.T. Barker, which closed its doors after filing for bankruptcy in 1992. After spending many years in the office of professor emeritus Wellington Chan, the chair currently resides in President Veitch's office.

8) C-B-A-D. The ceremonial burial of a rubber chicken prior to the Oxy-Pomona football game began in the early 1930s. (On the flip side, Pomona students burned a papier-mâché tiger.)

10) B. It rained so hard in 1965 that the sidewalks were flooded on York Boulevard.

13) B. Carpenter swallowed 39 live goldfish "without benefit of salt or chaser," Thomas Heber wrote in the Los Angeles Times. Oxy psychology professor Gilbert Brighouse weighed in on the craze, calling it "a quick [and] easy way to emerge from the morass of anonymity."

14) C. With or Without—a phrase associated by more than four decades of alumni with Oxy's legendary director of food services, Clancy Morrison.

16) A. An 8-cent stamp honoring Jeffers was part of the American Arts Series issued in 1973.

18) A:3. Psychologist Farsons co-leads the 16-hour group therapy session that is the subject of the 1968 documentary Journey Into Self. B:4. Rogers is producer of 20 Feet From Stardom, about backup singers Darlene Love, Merry Clayton, and their kin. C:2. As president of National Geographic Ventures, Patrick oversaw the release of Penguins. D:1. Director Ophuls (The Sorrow and the Pity) won the Oscar on his second try with Hôtel Terminus.

21) D. Gamble, Ralphs, and Hormel enrolled at Oxy as members of the Class of 1914, 1920, and 1950, respectively. Hammer, who dropped out of high school in 11th grade to pursue an acting career, studied briefly at Pasadena City College and UCLA to appease his parents.

22) D. John Dawson—who co-founded the New Riders of the Purple Sage—not only jammed with the Dead, he also co-wrote "Friend of the Devil."

23) A, B, and C. Inspired by the popularity of similar calendars at Arizona State University and USC, Lynne Watson '83 and Vyla Rollins '84 partnered with photographer Glenn Mar '84 to produce the 1984 Men and Women of Oxy calendars. A second group in Shearer's class conceived the Sidetrack Cafe, which Oxy built as a refreshment stand on the side of the newly resurfaced track.

25) A. The cleats belonged to Myron Claxton, an All-American running back for Whittier, and were stolen from the Poets' locker room just before a contest with Occidental in 1939. Undaunted, Claxton took to the field in his work boots, leading Whittier to a 36-0 victory.

26) A. After being selected by the Detroit Lions in the 17th round of the 1957 NFL draft, Kemp was cut from the squad before the 1957 football season began.

29) D. The two-time Olympic diving champion traded quips with emcee Groucho Marx on the April 19, 1956, episode of "You Bet Your Life."

30) D. Gutowski was on the cover of SI's June 24, 1957, issue with the headline "The Assault on 16 Feet." Jordan made the cover of Lifeas a USC undergrad in 1939, while Kemp appeared on the cover of Time in 1996 alongside presidential running mate Bob Dole.

32) C. University of Richmond alumnus Bruce Allen, who was hired by the Tigers in July 1979. He led Occidental to a 2-6-1 record in his single season as coach before leaving to coach the short-lived California Football League's Los Angeles Thunderbolts. Since 2009 he's been president of the Washington Redskins, dad George's former team.

33) C .Silver King was the original Silver in The Lone Rangermovie serial.

34) D. Bobby Riggs, who brought his "Battle of the Sexes" shtick to the Rocky Mountains resort community. Who won? For that you'll have to read Aspen Hustle (2008), by Sally and husband Marv Huss.

36) C. In 2011, Browne won the U.S. Senior Open by three strokes over Mark O'Meara at the Inverness Club in Toledo, Ohio.

39) D. Justice William Douglas, whose 1948 lecture, titled "The College and Society," was published by the College the following year.

42) A. Nelson Eddy, who is probably best remembered for the eight films he made with Jeanette MacDonald.

44) B. But a Studenmaker sounds pretty good, right?

47) B. "Fantasy Island"—although Veitch did appear on "The Love Boat" as an extra. "People think it's glamorous, but movie sets are very dull, actually," he told Occidental in 2009. "The thing I liked about it was I could read all day long."

COVER) C. Donald O'Connor—although the actor and hoofer played a post-WWII dad and college football player in the musical comedy Yes Sir, That's My Baby, which includes footage of the Jan. 1, 1949, Raisin Bowl in Fresno between Occidental and Colorado A&M.