Ready for the World | Occidental College 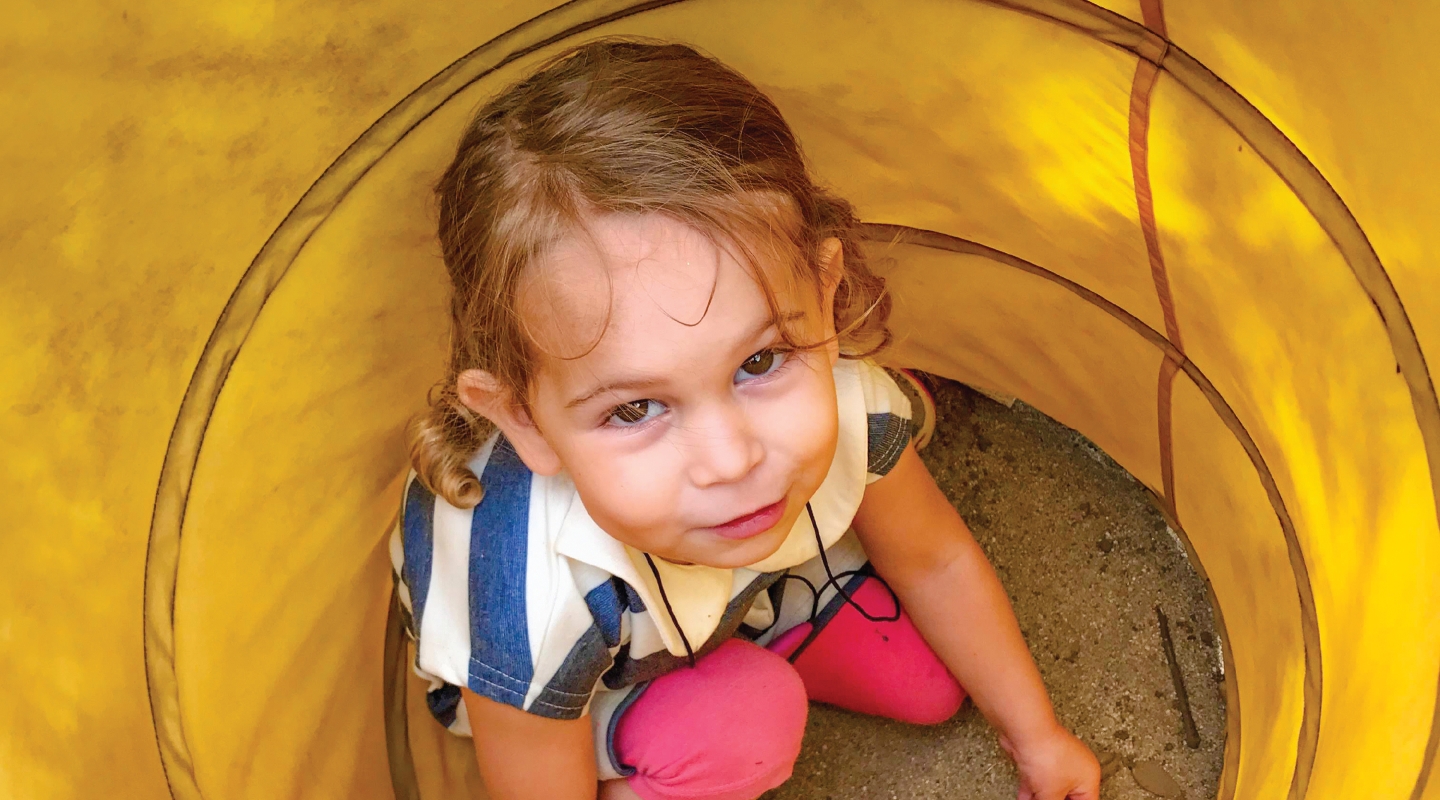 Ready for the World

Six days a week, Mario Hidalgo ’80 teaches a wide variety of stringed instrument lessons to students at his studio in Alhambra. Wednesday, however, is his favorite day of the week—when he brings his guitar to Occidental’s Child Development Center for music class. 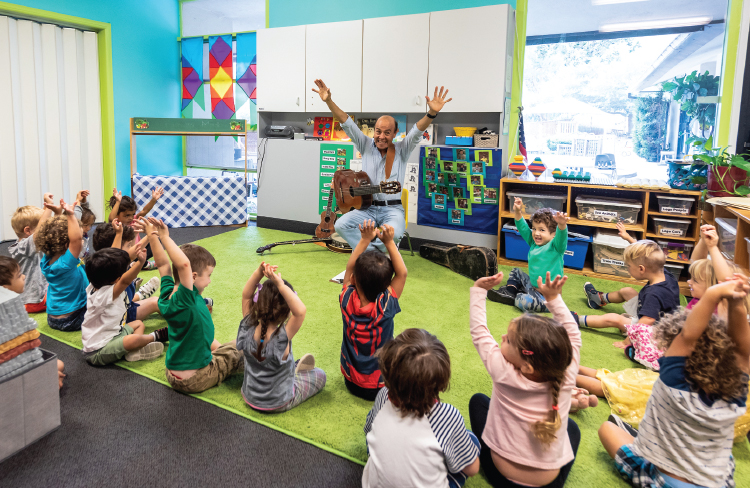 “I get to connect with the kids on their level,” says Hidalgo, aka “Mr. Mario,” who graduated from Oxy with a degree in music performance with an emphasis on classical guitar (and knew he wanted to be a musician himself at the age of 5). “Sometimes we brainstorm to write a new song. I ask them questions like, ‘Why is Mom or Dad like a superhero?’ And we formulate songs out of their ideas.”

Hidalgo recalls one little girl named Sophie who confided that she had written a song herself but was too embarrassed to share it with the class. Instead, she whispered it to him, and he realized she had used the tune of a song she had learned in class but changed the words to be about Santa Claus. “And it rhymed!” he says. “I couldn’t believe it.”

Sophie and her schoolmates wound up performing her song for the CDC’s holiday program. “That’s why I do this,” says Mr. Mario, who has volunteered at the center since 2000. “It gives the kids the freedom to be creative and express themselves.”

At Oxy’s annual Employee Recognition Ceremony in May, some of the loudest cheers in Rush Gym came from the luncheon’s smallest attendees—the Hungry Caterpillars (ages 2 to 3), Busy Bees (ages 3 to 4), and Terrific Tigers (ages 4 to 5) who populate the CDC, which has cemented itself like Elmer’s Glue to the College community over the last quarter-century.

Hundreds of children of Oxy employees and the surrounding community have benefited from the College’s dedication to educating future generations of leaders—even the ones who are still in diapers. “Life skills are built in these first five years,” says Laura Drew, the CDC’s director since 2017. “They start as such new, tiny little people, and over the course of their years with us they develop in so many magical ways, ultimately becoming mature, competent, and articulate, each coming more fully into who they are and will be as unique individuals.” 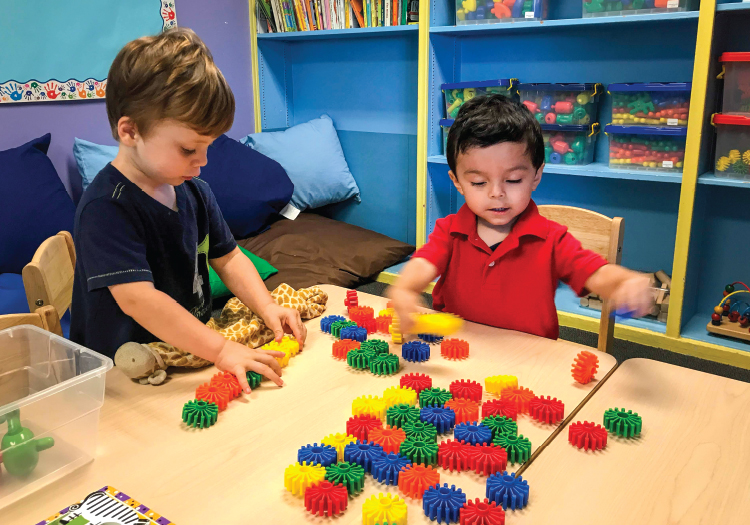 According to Nalsey Tinberg, professor of mathematics and a member of the Oxy faculty since 1980, the idea for the center grew out of discussions among the Women’s Collective, a group of female administrators representing different departments on campus. “The issue was always viability and how much of a subsidy it would require,” she says. “It had to basically pay for itself.”

By 1992, the proposed child care center had a potential home—the longtime Dean’s House, built in 1951, when Glenn Dumke ’38 was dean of the faculty—but the house needed new plumbing, heating ducts, and additional work to comply with state regulations. The estimated startup costs to the College were in the neighborhood of $285,000, with the tuition for a child of an Oxy employee projected to be up to $540 per month.

Following the arrival of Phil Arcuni in 1990 as associate professor of physics, the proposed center found its most valuable advocate. A young father of two, Arcuni chaired the user committee “and worked tirelessly to get the thing going,” recalls John Swift, emeritus professor of English, who was then associate dean of the faculty and a father himself in a two-career household. In 1994, Arcuni received the Janosik Award for his service to the College for his work on the center. “He probably sacrificed much of his academic career to get that,” Tinberg says.

Arcuni, who moved to Santa Clara in 1997 to take a job in the corporate world, died of cardiac arrest in 2014 while bicycling with his niece in Woodside at the age of 56. “When he passed away, I sent a note around saying any parent who’s ever had a child in that center owes him a debt of gratitude,” Tinberg says. “He got it over the finish line because he did all the back work.”

When the center opened its doors to 18 students in September 1993, it was a boon for professors Jaclyn Rodríguez ’77 and Eric Newhall ’67, whose daughter, Amanda, was a member of the first daycare class. “It was a wonderful experience for all of us—except, perhaps, for my mom, who had cared for Amanda for her first couple of years and was hesitant to give her up,” says Rodríguez, who has taught in the Latino/a and Latin American Studies Department since 1984. 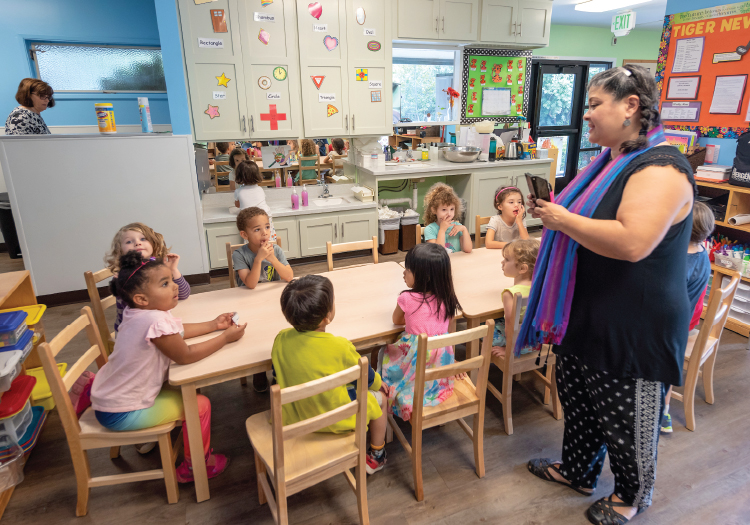 From treks to Taylor Pool for swimming lessons to the Halloween walk throughout campus in costume, the CDC’s students “brought smiles to just about everyone on campus, especially Oxy students, many of whom missed younger siblings,” adds Rodríguez. She and Newhall chaperoned field trips in those formative years (“We were known as ‘Amanda’s parents’—pretty cool”).

Now they are the grandparents of second-generation CDCers Jax, 7, who graduated from the center in 2017, and his sister Ava, 2, who will enroll this fall. Their mom, Andréa Rodríguez-Scheel Minkoff ’06 M’10, is Amanda’s older sister. “Amanda and Andréa both volunteered or worked at the center,” Rodríguez says. “It helped to shape and confirm their mutual intellectual interests in K-12 education—a win all around.”

“Having the Child Development Center on campus was one of my best benefits during the time I taught at Oxy,” adds Newhall, who retired from the English Department this spring. “Jacki and I had complete peace of mind with regard to daycare for Amanda during her pre-kindergarten years. That is a priceless benefit for parents.”

The center’s early days were not without their growing pains. Enrollment was lower than expected, and founding director Brigette Rodgers left Oxy less than six months after the CDC’s opening. Her successor, Tamara Woolery, spent the next 23 years as director, fostering “a deep educational and familial spirit” that remains today, Rodríguez says.

“I wanted the center to be a home away from home for all the kids,” says Woolery, a mother of two who retired two years ago and now lives in Pittsburg. “I wanted parents to know their kids were safe and happy. And I wanted learning to be fun rather than a chore.”

When she stepped into the role, Woolery played a dual role of director and teacher, with only one other teacher to help. They never took lunch breaks; they planned lessons while the kids napped. (The center now has a full-time staff of 10.)

In building the program from the ground up, she initiated an annual themed extravaganza that encompassed everything the children had accomplished during the year. For one such program, she and her fellow teachers researched each child’s heritage and hand-sewed costumes for the performance.

“We had gone to the library and museums looking for authentic clothes to make for the costumes,” Woolery says. “Parents saw their kids wearing clothes like their great-great-great-grandparents had worn. One little girl wore a pink linen dress with tiny pearls, and her mother started crying.” By the time the program was over, she adds, there was not a dry eye in the room.

The CDC was still in its infancy when parents Sylvia and Victor Chico started looking for childcare options for their firstborn son, Christian. “It felt like a family-oriented center that wasn’t too big or too small. It was just right for helping kids’ social skills,” says Sylvia, who has worked in the Urban and Environmental Policy Department for more than 25 years.

Victor, manager of Oxy’s Postal Operations Center, agrees, adding that when Christian and his younger brother, Lee, went to elementary school, their teachers were impressed with how well behaved they were. Years later, they would return to Oxy for college: Christian graduated in 2018 as a media arts and culture major, while Lee will matriculate this August with the Class of ’23. 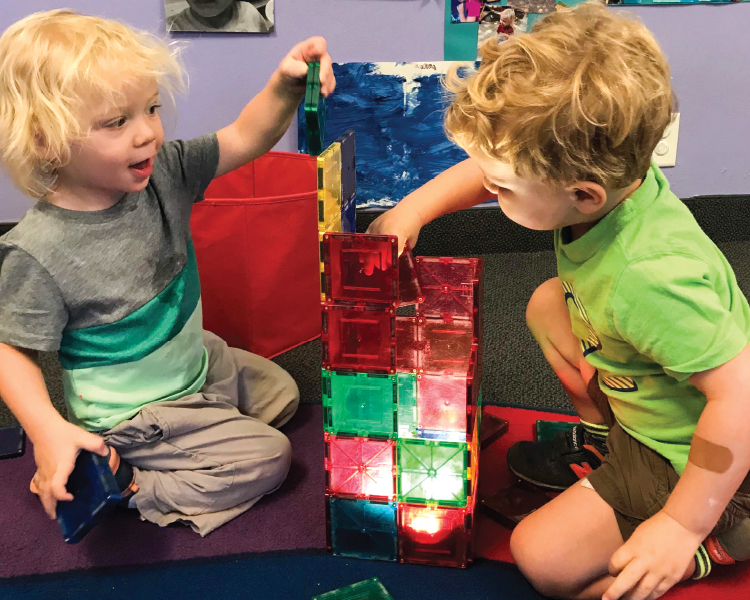 While proximity and convenience played a role in why Amanda Zellmer, assistant professor of biology, and husband John McCormack, associate professor of biology, chose to enroll their children, it’s the teachers’ commitment that makes all the difference. Daughter Avery is now 10, and son Beckham is 4, currently in the Terrific Tigers class. “I hear things he’s picking up at school,” she says. “He’s building in the block area and using the words ‘vertical’ and ‘horizontal.’ He’s picking up those terms in a play-based setting.”

With a current enrollment of 45 children (and a waiting list to boot), the center’s commitment to the students and their parents remains constant, even with tweaks to the curriculum. When Woolery announced her retirement, Zellmer was a member of the search committee that hired her successor. “We wanted the new director to be willing to incorporate more play-based activities but not make drastic changes,” she explains.

They found the ideal candidate just blocks away from Oxy. Laura Drew has worked in early childhood development for 24 years and has lived in the neighborhood surrounding Oxy for the last 18 years. “Laura has done a great job of listening to the teachers and their history while also bringing in new ideas,” Zellmer says.

While the center always mixed learning with fun, the CDC has taken a more deliberate approach to play-based, child-led education under Drew’s leadership. “Young children have to interact with something to learn from it and retain it,” says Drew, who majored in music education and performance at UCLA and is currently working toward a master’s in early childhood education at Cal State Northridge. “They have to be an active participant in the process and construct their own learning through their experiences and interactions.”

In moving toward what is called an emergent curriculum, she adds, “The teachers become skilled observers and listen to the questions and comments the students make. And then they tie the reading, writing, and math to those interests.” For instance, when the Busy Bees expressed interest in cooking, the teachers arranged a mini-field trip to Oxy’s campus dining facility, where the children watched as their lunch was being prepared.

Casey Adams ’03 M’05, whose three children have gone to the CDC, grew up across the street from the center. Her mother, longtime Oxy employee Carolyn Adams (who died in August 2018), so loved the center that in lieu of flowers at the funeral, the family requested donations to build a canopy over the patio in the big kids’ yard in her memory. The canopy will provide much-needed shade over the outdoor activity tables.

Like Zellmer, Adams believes that the teachers make the biggest difference at the center. She loves that they allow the students to express themselves, no matter how strange the result may seem to adults. “When the teachers ask questions, sometimes the children’s answers have nothing to do with the question asked,” she says. “But the teachers write it down even if it doesn’t make sense, and the kids see you value what they have to say.”

Marcy Carrillo, who has co-taught the Hungry Caterpillars class for the bulk of her 24 years at the CDC, drives about an hour and a half to work because the staff, students, and parents feel like family to her. The center provides “a sense of security for the kids, knowing that they matter, that they feel at home,” says the mother of two. “The kids leave feeling good about themselves, empowered and ready to take on kindergarten.” 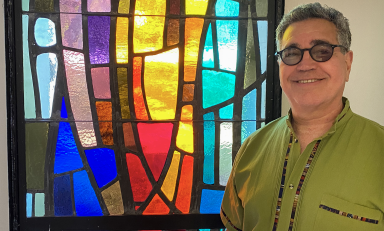