Putting Oxy's endowment numbers under the microscope, dissecting the magazine's National Enquirer moment, and correcting a few stats on our inaugural Hall of Famers

Roger Magyar '66 wrote one of the most important letters to the editor ever to appear in this magazine ("Running the Numbers," Fall). He points out that during the past quarter-century the market value of Occidental's endowment has diminished in relation to some of its peer colleges, and has failed to keep pace with inflation. Magyar concludes correctly that this "has gloomy implications for tuition, financial aid, faculty quality, and enrollment" and cites the striking contrast with Pomona during the same period: Pomona's endowment has grown almost 10 times in absolute value, as it now approaches $2 billion. Occidental's grew three times, as it now strives to reach $400 million.

When I was president of Occidental during 2008-2009, I presented these endowment comparisons to the trustees. Bowdoin, Carleton, Colorado, Macalester, and Reed College 25 years ago had endowments approximating, or smaller than, Occidental's. Those colleges have increased their endowments during these years from twice to four times that of Oxy's growth. Their endowment market values today range from $500 million to almost $2 billion, to support the same size, or smaller, student bodies. These are success stories, and their trustees, administrators, and alumni are to be congratulated.

I included in my comparisons for the Occidental trustees the case of Whitman College—where I was president from 1975 to 1988—because Whitman is a peer institution and has had a similar endowment history to that of Occidental. In 1988 the two colleges had equivalent endowments slightly over $100 million, and today they each have endowments under $400 million. One is in rural eastern Washington, the other in Los Angeles. Yet, for the students and the faculty, they are similar educational environments, sharing educational values, just as they are similar to Pomona. However, their institutional financial histories are different, and the reasons idiosyncratic. Human beings made decisions with consequences at each college. Fundraising, endowment investment allocations, on-campus budget management, student recruitment and selection, and financial aid policies all played parts in each institution's policies and decisions.

Which brings us to Occidental's present.  Jonathan Veitch's appointment signified the hopes for a new era, transcending the past, meeting the challenge offered by Magyar's thoughtful letter. This will require alumni, as well as friends of the College, to support financially the current effort to preserve demanding academic studies as well as continuing access for able students irrespective of background.

I want to congratulate you on publishing Roger Magyar's letter on the Occidental/Pomona comparison and on Oxy's shameful endowment performance. I do not know Magyar, but was impressed by his data. He is, I assume, a loyal and competitive alumnus—someone who cares how Oxy ranks nationally by all measures.

Back in the 1990s the Faculty Council's Subcommittee on Finance (SCOF) issued a report with remarkably similar numbers. Our report went back into the 1970s, and showed that Pomona's and Occidental's endowments were even closer than using 1988 as a baseline. At that time, a number of trustees were irritated that faculty dared to question their stewardship of the endowment, but President Slaughter insisted that that report be widely discussed among trustees, administration, and faculty. In many tours as head of SCOF and as faculty representative on the trustees' budget and finance committees, I continually tried to draw attention to the underperformance of Occidental's endowment. Faculty presidents including Dan Fineman and Nalsey Tinberg, and others doing this work such as Jim Whitney, have pushed hard to get real discussion of the College's financial condition.

There are complex reasons why College leadership finds it disquieting and difficult to discuss this issue. After all, we are where we are, everyone is trying his/her best, and it always seems discouraging to have such discussions. I have heard that excuse for at least 25 years.

Nonetheless, no disease is treated until it is diagnosed, and no one ever gets a diagnosis without first admitting that there is a problem. Occidental's endowment is at least a 40-year problem, and good for Magyar for calling it what it is. President Veitch is very interested in fundraising, and, apparently, very adept at it.

There are no quick fixes to a 40-year problem, but perhaps he can find creative responses to begin treatment, to turn the slopes of Oxy's endowment curve in a positive direction relative to its competition. The last time I did this work, if memory serves, Oxy's endowment ranked even better than the 75th Magyar found in 1988, and it was falling rapidly. That is what SCOF reported, and Magyar has opened it for public discussion. We need the concentrated best thinking of administration, faculty, and financially savvy trustees. We obviously need new thinking and aggressive leadership.

I enjoyed Roger Magyar's bracing bit of contrarianism in the Fall Occidental, but I'm not sure playing this kind of ranking game tells us much about the College's future prospects. Anybody who's loitered around the campus in the past couple of decades knows—at least in outline form—the sad story of the financial doldrums of the 1990s as well as the fumbles of the interregnum between Ted Mitchell and Jonathan Veitch.

But Oxy's US News liberal arts college ranking at 39th (versus fat-hen Pomona's 4th) is much higher than the 187th rank Magyar quotes for the endowment—and shouldn't that baseline really be based on liberal arts colleges as opposed to universities? In spite of adverse conditions, Oxy seems to be doing pretty well, certainly a lot better than might be expected on such a tight budget.

I recently took a look at Pomona's online catalog, just to see whether their academic programs are somehow massively better than Oxy's. At first glance, the offerings look amazing, but then you realize that courses for all the other Claremont Colleges are thrown in together, so you're in effect comparing a small college to a small university. When you factor out Pomona's courses by themselves, I didn't see too many glaring differences in academic quality or coverage.

On a subjective note, I've been going to Homecoming "Student for a Day" classes for the last several years, and I've been extremely impressed with what I've seen. I've sampled classes in Japanese history, cognitive science, immunology, international affairs, literature, writing, film, and many more. Based on my sampling, Oxy's faculty is superb, certainly comparable to the amazing crop of young professors we had in the late '60s (though where is the Bob Winter of the 21st century?). The students are wonderful—smart, voluble, engaged—and they actually seem to have read the assignments!

But I think the best portents for the future are the ideas and energy that Jonathan and Jorge have injected into the scene over the last couple of years. You don't have to agree with every detail of every program, but Oxy is moving forward on many different fronts: new academic programs, new faculty, new buildings, new engagements with the city, new international relationships. I think these new objectives are more exciting than the "mundane" ones that Magyar suggests and will hopefully pay off in increased financial support from many sources (OK, OK, I haven't sent in my pledge yet—I'm short until the next paycheck—but I promise to double my usual pitiful offering).

A Hit, and an Error

I very much enjoyed your article about this year's inductees into Oxy's inaugural Athletics Hall of Fame ("Stars in Stripes," Fall). As a former student-athlete and a supporter of Oxy athletics for many years, I also appreciated senior Logan Allen's remark that the College could support athletics to a stronger degree. This statement rings especially true in light of the Oxy legends who have been selected to enter the Hall of Fame this year and the strong athletic tradition we share.

While I am generallly pleased with Occidental Magazine—particularly the recent article that addressed Occidental's international connections—I was horrified to see that vulgar photo of the dead shark hanging at a sport fishing tournament in Maine ("Jaws of Life," Fall). I am the kind of Buddhist-Quakeragnostic-pacifist-animist that finds such ­displays intolerable, even in the thinly veiled disguise and auspices of "science."

I felt similarly as a freshman in 1965 in seeing some of the 60,000 dead Mexican birds in drawers at the College, but the disgust at your running such a ghastly photo worthy of the National Enquirer in our alumni magazine was too much. I dissected a small sand shark in high school biology class, but in 2012, such an effort to destroy so many in the name of science is unacceptable to me. 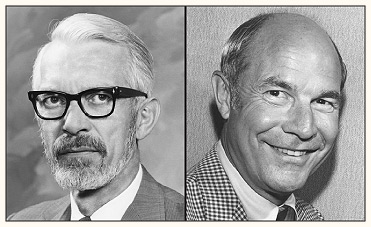 In "Stars in Stripes" (Fall), we incorrectly reported that Bob Gutowski '58 died in a ­single-car accident in 1960. According to his widow, Joan Bertotti Gutowski House '60, "He died when a drunk driver driving on the wrong side of the road hit him head on. The two drunks in the other car lived."

In the same article, we incorrectly reported that Bill Redell '64 guided Oxy's football team to SCIAC championships in 1962 and 1963. Former teammate Tim "TK" Scanlan writes: "My recollection is that we were 7-2 in 1962 (second behind Whittier) and 6-3 in 1963 (third behind Whittier and Redlands). We had good teams both years but small squads, which meant no depth."

Finally, in "The College According to Culley" (Summer), John McAnally was mis­identified in a photo as Robert Ryf, his predecessor as dean of students. (That's McAnally on the left, above, and Ryf on the right.)