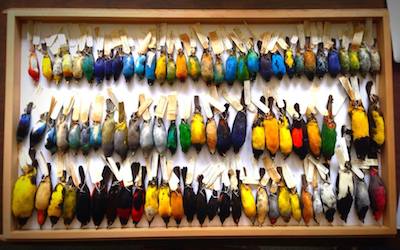 "I’m thrilled," said John McCormack, director and curator of birds and mammals at the Lab and assistant professor of biology. "This is a game-changer for the Moore Lab, as it will provide for new specimen cases, money to design a new website and the person-hours we need to update the organization and naming of the birds."

The Lab’s collection contains 62,382 bird and 2,158 mammal specimens, placing it among the world’s largest research natural history collections. There are also 582 sets of nests and eggs. The collection is primarily Neotropical and focuses on Mexican bird species. It is especially strong in hummingbirds, with 6,957 specimens.

The Collections in Support of Biological Research (CSBR) grant money will be used to replace the specimen cases with modern white steel cases that will better protect the specimens against pests; to fund students and staff to work on updating the taxonomy (scientific names) of the specimens ("which are woefully out of date and impeding research," according to McCormack); and to buy a new website that will highlight the collection and its research and educational uses.

The grant will fund two summer research students for each of three years. The Lab received the entire award amount in one lump sum in late June.

McCormack says he "was ecstatic" when he learned the Lab had received the funding—"and still am! I thought we had a great shot to get this grant given the urgency and the fact that the Moore Lab had never gotten one previously. However, with NSF funding rates hovering around 3-15%, I still thought, even in the best case, the odds were stacked against us."

The Moore Lab was founded at Occidental in 1950 by Robert T. Moore, a quintessential adventurer, naturalist, poet and businessman in the mold of Teddy Roosevelt. Following his lifelong interest in ornithology, Moore embarked on his mission to put together a physical record of Mexico's bird diversity. Making several trips himself, but mostly through a professional collector under his employ, Chester C. Lamb, Moore amassed over 50,000 bird specimens from throughout Mexico.

All specimens were originally housed in Moore’s private home in Pasadena before being moved, along with Moore’s personal library, to Occidental in 1951.

These specimens form an invaluable record of Mexican biodiversity from a time before habitats were cleared for forestry and agriculture. The Moore Lab collection continues to reveal its mysteries in the form of new species, and knowledge of how new species form on the rugged Mexican topography. New technologies mean that the specimens are also revealing the hidden secrets of their DNA for the first time.

The Moore Lab is committed to open access of data and specimens to researchers and is visited often by international researchers. Its database can be searched online via Arctos and Ornis2.

The Lab previously received an NSF grant in 2012 to use new genomic tools to uncover the phylogeography of Mexican highland birds, reptiles and amphibians.