Although she is the first in her family to pursue a bachelor’s degree in post-secondary education, Joscelyn Guzman didn’t initially identify as a first-generation college student when she came to Oxy. 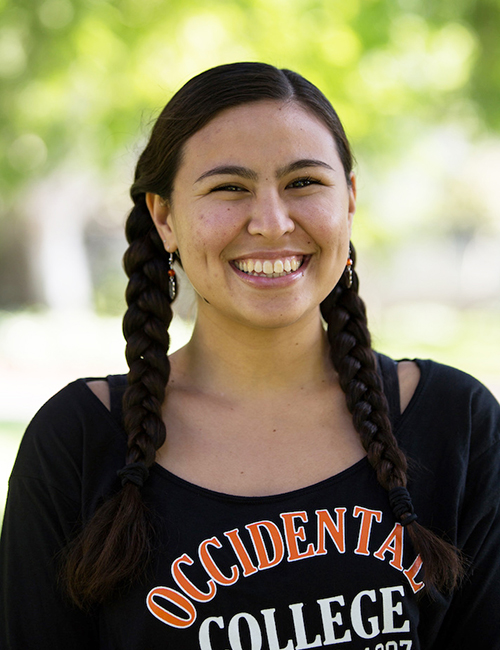 The Modesto native and religious studies major said she’s grateful for the ways her identity has blossomed at Oxy. She’s also thankful for the strong community that has supported her along the path to graduation. One of the highlights of her experience at Oxy is simply graduating, she said, in part because it was such a communal effort. “It took so many offices on campus and so many people on- and off-campus to help me get here.”

Guzman was among 60 juniors chosen nationally to attend a summer program called Leadership Enterprise for a Diverse America (LEDA). It is committed to helping low-income, high-achieving students, predominantly students of color, to gain admission to selective colleges and universities. That’s where she first learned about Oxy.

“Being first-generation, you don’t always have the same support that your peers do. And community for first-generation students is very important for retention … and for feeling like you belong at the school.”

Understanding the necessity for resources for students like herself, Guzman has taken the lead this year by working with the Dean of Students Office to try to visualize how more institutionalized support could take shape. While a sophomore, she also had the honor of serving on a national task force on the first-generation student experience, getting to travel to New York City and draft policy recommendations for the Aspen Institute Task Force on College Opportunity for High Achievers.

At Oxy, in addition to participating in Campaign Semester, Guzman has worked with the Center for Community Based Learning, the Admission Office, the Center for Digital Liberal Arts, Delevan Drive, Peer Health Exchange, O-Team, Multi, Latinx Student Union, and Intervarsity Christian Fellowship. She has held leadership roles in Mortar Board, the national honor society, and the First Gen Club. This month, she was also awarded a Student Community Action Award from the Urban and Environmental Policy department.

Guzman’s biggest passion, she said, is education. Specifically, she’s passionate about educational equity, which is why she’d like to pursue teaching before getting into education policy work. To start, she’s been accepted to a master’s program called Urban Teachers at Johns Hopkins School of Education.

“Through my education, I’ve been able to travel the United States and do work that I never imagined that I would do. I think that that’s why I’m so passionate about it, because I see that education has the power to transform people’s realities,” she said.

Guzman has been thinking a lot about how you don’t have to be in a position of power to make change happen, she said.

“I mean, theoretically it’d be cool to be Secretary of Education for the United States,” she laughed. “But during my four years at Occidental, being involved with community organizations, I’ve seen the impact that people can have without a big title. As long as I’m working to better support the communities that I’m in, I’ll be doing work that I’m proud of.”

Joscelyn Guzman received a Dean's Award for Excellence at the 2018 Student Leadership Awards ceremony. Each year, the Dean of Students recognizes seniors who embody Oxy's four pillars of Equity, Excellence, Service and Community.