Tatiana “Tati” Ramos-Gallardo was just 5 when she and her mother moved to Ashland, Ore., from their hometown in León, Guanajuato, Mexico. The little girl didn’t speak a word of English. 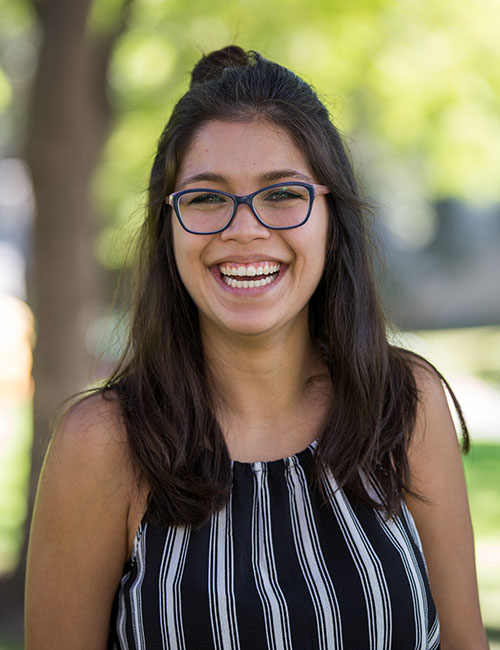 For the next few years, Ramos-Gallardo was regularly taken out of her public school classroom for ESL tutoring. She disliked being isolated from her peers, disliked feeling “different.” Now she wants to help other young learners in this situation through her intended career as a speech pathologist—she will start a master’s program at University of Redlands at the end of the year.

“I really want to work with others to help empower them through communication,” she explained. “Specifically, I want to focus on children who have communicative disorders. I know what it’s like to not be able to communicate your needs, not to be able to say ‘Wait, I’m really hungry’ or ‘This makes me uncomfortable.’”

For Ramos-Gallardo, Oxy is the place where she really developed a sense of confidence about her career goals. On the cusp of graduation, she feels more confident in the fact that she has valuable capabilities and can explore what she wants to do.

A group language major who has taken extensive coursework in diplomacy and world affairs, Ramos-Gallardo has always been passionate about foreign languages and cultures. In addition to studying Spanish and linguistics, she also took courses in French and Arabic as part of her coursework and studied abroad in Paris. To her, language is like a beautiful puzzle.

“I love thinking about how we make sounds in our mouth and how those change from language to language. And I love that you get to learn so much about other people and other regions of the world.”

While not pursuing her passion in the classroom, Ramos-Gallardo has devoted herself to service both at Oxy and in the greater community. She is a co-founder of the organization Comparte, a student- and professor-led group that works with local day-laborers to help them learn and improve their English-language skills. The program, now working at three different sites, has also offered English workshops to staff workers at Oxy.

“We are founded on the belief of popular education,” she said. “It’s kind of not traditional teaching at all, it’s more about what the workers want. It’s different for each site that we work with, and I think it’s really wonderful to be able to communicate with these workers and create these relationships.”

She remembers coming to visit Oxy once she’d been accepted and relishing the beautiful campus and warm California sunshine. She loved Los Angeles, feeling like it was a perfect mix of her cultures in Mexico and Oregon.

“I just remember the sun hitting my face and feeling like, ‘Yes. This is right.’”

Tatiana Ramos-Gallardo received a Dean's Award for Service at the 2018 Student Leadership Awards ceremony. Each year, the Dean of Students recognizes seniors who embody Oxy's four pillars of Equity, Excellence, Service and Community.