A writer and theater artist working in the area of performance, Will Power is a pioneering creator of hip-hop theater and has been called “the best verse playwright in America” by New York magazine. 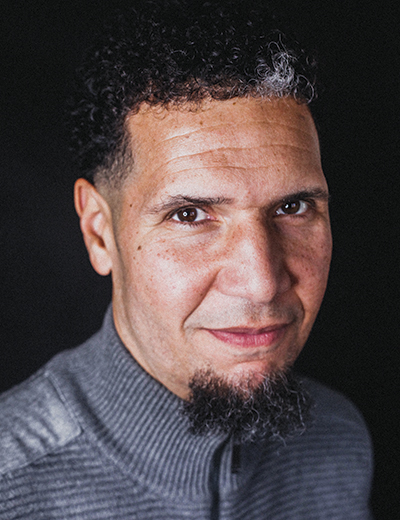 “California, to me, is the most innovative place in the world,” says Will Power. “I think it goes beyond the people. It’s the energy, it’s the land. There’s innovation here that’s already influencing my teaching and my work as an artist.”

Power’s association with Occidental dates back to 2009, when he was named G. William Hume Fellow in the Performing Arts. As a visiting professor in 2011, he met with faculty and students to help support issues of diversity and inclusion in addition to directing his hip-hop musical The Seven. In Fall 2020, he was named assistant professor of theater at the College.

“I returned for the opportunity to do deeper work, to work with an amazing and diverse student body, and to do it back on the West Coast, where I’m from originally,” he says. “Over the years, I fell in love not only with Occidental’s students but with the Theater Department faculty—a great group of artists and professors who really care about their students. I’m really honored to be here.”

Much of Power’s work and research revolves around looking at the classics with a fresh perspective, drawing parallels between past and present.

“I teach works of verse drama, Shakespeare and the Greeks, but I do it in a way that tries to give it relevance and make connections to today,” he says. “So I might look at Shakespeare’s iambic pentameter, and then I might look at hip-hop verse.”

To be clear—when he talks about “classics,” he doesn’t just mean the European canon. “To me, a classic is whatever those excellent traditional stories are that stand the test of time in whatever culture.”

I teach works of verse drama, Shakespeare and the Greeks, but I do it in a way that tries to give it relevance and make connections to today.”

In this sense, classics extend to African American folk tales and “classic” figures like Malcolm X, the subject of Power’s most recent work, Detroit Red. Premiered in early 2020, the play examines the Black icon’s life-shaping experiences as a young man in Boston.

This fall, Power taught an interdisciplinary class called “Black Arts Movement” about a 1960s movement of African American artists responding to the times. This spring he’s teaching “Freak the Classics,” a deep-dive on the text of Shakespeare’s Richard III followed by a look at well-received contemporary adaptations of the play, including one of Power’s own: Seize the King, which was recently named a New York Times Critic’s Pick. He’s also directing a virtual performance of Romeo and Juliet.

Power has always been passionate about teaching, and though it hasn’t always been clear that academia would be the way, he says it’s been a very positive experience. Meanwhile, he continues to get commissions and is developing a number of different pieces. Over the course of his career, Power has bridged the gap between practitioner and professor, calling it “a wild ride.”

“I came to teaching not with a Ph.D., but with years and years of experience in the field, including a lot of work in New York and in Europe,” he says. “Then I started to work in academia doing workshops or residencies, eventually getting awards or fellowships that placed me in universities teaching.” Then came faculty appointments and a tenure-track position at Occidental.

Power says he wants students to walk away from his classes feeling empowered.

“It’s my job to create a space for them to find or continue to sharpen, clarify and strengthen their voice—their artistic voice, their spiritual voice and their human voice.”

His aim is for students to not necessarily walk away with answers, but to have wrestled with a lot of complex questions. This, he hopes, will feed their life as human beings, artists, lawyers, teachers or whatever they decide to do.

“And I don’t know how old I look,” he adds wryly, “but I’m pretty old. I’ve been in the field for several decades. So I try to give my students some tools to sharpen their intellect and creativity that they can utilize in whatever way they feel fit.”

More about Will Power