The Craft of Diplomacy (COD) is a unique initiative aimed at advancing public and academic understanding of the function and contributions of diplomatic agents (state and non-state) in global politics. To this end, the COD initiative seeks to make available timely briefings, discussions, and  lectures to the Occidental community and the public large.

The annual lecture and award ceremony, Profiles in Diplomacy, recognizes significant contributions to the craft of diplomacy by an individual.

Ongoing course work and student/faculty research on the power of sport to cross borders in a globalized world.  Ambassador Shearer has lectured on the topic at UC Santa Barbara, USC, Korbel School of International Studies, Brown, Harvard and other universities. 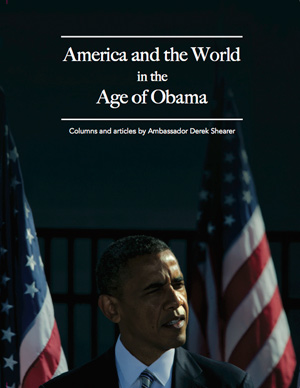 America and the World in the Age of Obama features pieces that deal with political and economic commentary on the presidency of Occidental College alumnus Barack Obama. Written by Occidental’s Ambassador Shearer, many of the articles describe course projects that analyzed the policies of the Obama administration. In others, published each December, Ambassador Shearer reflected on the year’s events and also highlighted his favorite books and films. As a friendly critic of the President and his administration, Ambassador Shearer suggests constructive policies to further progressive goals, especially in the realms of the economy and US foreign policy.

Ambassador Shearer is the Stuart Chevalier Professor in the department of Diplomacy and World Affairs at Occidental. He is also the Director of the McKinnon Center for Global Affairs, handling the college’s international relations and directing the expansion of its international affairs programs. Ambassador Shearer served as US ambassador to Finland during the Clinton administration. He has been a public diplomat for the State Department in Asia, Europe, and Latin America, and an advisor to the heads of the US Pacific and Central Commands.