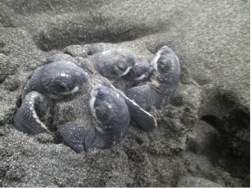 Hammocks swing under the palms.

Today marked our first full day at the Pacuare Nature Reserve. After yesterday’s late night turtle patrol many of us were extremely tired waking up in the morning, but stepping out of our wooden bunks we were greeted with a refreshing ocean breeze and the breathtaking sight of palm trees, sand and a wide expanse of the Atlantic ocean. It more than made up for our late night excursion. After heading over to breakfast and having pancakes (a welcome relief and quick reminder of breakfast foods from the states), we put on our rubber boots and started out on a hike of the nearby trails. As we were grouping up outside of the cabins in the clearing, we had just begun to walk towards the trail head when someone in our groups says a scary and exciting word, "SNAKE!" In a clump of small palms, near the base of the bush were the stems all came together in a group, a black racer snake was twisting and slithering through the plant. Everyone gathered around to have a look, excited at seeing a snake up close. As though realizing he was being watched, the snake started to come out of the bush to retreat to the safety of the dense forest nearby. Everyone froze as it passed a mere foot or two away from our feet. Once it had safely disappeared we started out on the trail, heading deeper into the forest. After seeing a few types of lizards, birds and some white faced capuchin monkeys hanging around, we took a fork to a different trail that was a lot narrower, less traveled, with more overhanging brush and mud. After walking carefully on that path for a while we came upon an exciting discovery…..jaguar tracks! Imprinted along the muddy trail were multiple paw prints of the large jungle cat, who frequently travels that trail and has been photographed there in the past using a motion sensing camera trap. Our hike was not a very long one, as it was very warm and the bugs and mosquitoes were everywhere, worse than any of the other places we had been to on our trip so far.

Back at the cabins, we split up, enjoying some free time to relax and hang out before lunch. A group of people went down to the beach to lay in the sun and splash around in the waves. A few others rested in the hammocks that were swinging in between some palm trees, reading books or just enjoying themselves. I myself headed back to my cabin for a much needed nap, tired from last nights’ turtle patrol and storing up sleep for another late night patrol this evening. After lunch we attended a talk by one of the researcher’s at the station, Marga Lopez the Director of Nature & Oceans of the Americas, who was studying the lifecycle of the turtles as it occurred on the beach. This included the laying of eggs, their development and the turtles’ tiny trek from the nest back into the ocean. A few of the main points of her research were looking at the temperature of the nests. It is the temperature that determines if the eggs are male or female. In a perfect world the nest would be half and half male and female, but with the increase in temperature and a host of other factors, most of the nest are warmer leading to a higher amount of females born, with some nests solely females. Another problem she is looking at is the influence and effect of the berm on the laying and making of nests. The berm is the little wall or drop off of sand that builds up at high tide. The berm changes its height and distance from the ocean depending on the season, wave cycles, tides and storms. The berm can present a problem to the female leather back sea turtles coming to lay eggs, as if the berm is too large it is difficult and sometimes impossible for the female to climb over the berm, forcing her to go back to the ocean to try again later, or to lay her eggs below the berm, dangerously too close to the ocean for the nest to survive.

After the talk she announced that she was going to be releasing some of the turtles that had just hatched in the nursery. The station has a nursery that they constructed on the beach which contains around 20 or so nest sites. These sites are used for experiments and for rearing eggs that wouldn’t have survived in the wild. The experiment that had newly hatched turtles was one that looked at the effects of shade over the nests on temperature, and on sex determination as well. The baby turtles were weighed, measured, flipped on their backs to time how long it took for them to flip back over, and a few other pieces of data to record before letting them go.

One piece of data being used for this particular experiment was to time the turtles’ journey from the nest to the ocean. Placing each of the babies at 20 or 30 meters from the sea, we placed them down and they were off! Flapping their fins, they slowly (…slowly…) made their way to the water.  Pushing through until the ocean finish line, the little turtles scaled small sand dunes made by waves, wind or feet, struggling up the slope and sliding down (so cute!) the other side.  With only a few face plants or wrong turns, all the turtles made it, some slower than others, to the water. We all stood around, watching them go, wishing them luck in the vast ocean world they had entered.

After dinner, and a few rousing games of cards, a few of us went on a second turtle patrol. Unluckily for us, just as we started out at 8 o’clock that night it began to rain. Half of our four hour patrol was in the pouring rain. But it was worth it. About an hour in we came across a large female leather back sea turtle coming out of the ocean to build her nest. We moved back and squatted down, staying out of site as not to scare her away. When she was almost done building her nest, which consisted of her using her back fins to scoop out the hard packed sand (even harder in the rain). Our guide for the night explained to us the nest was too close to the water line, and it would be washed out by the waves, so we had to relocate it. Once the female was finished digging the nest, we came up behind her and maneuvered a large bag in the hole to catch the eggs as they fell. When she was done laying around 60-80 eggs, we pulled out the bag, heavy with all those eggs, and dug another nest further up the beach at a more suitable site according to our expert guide. After counting and replacing the eggs in the nest, we watched as the large female turtle (who we had to measure as well while she was digging) slowly pulled herself across the beach and back into the water. At the very end of our patrol we saw another turtle that came up onto the beach, reached the berm but did not climb over it, and go back into the water without laying a nest, and example of a false crawl (where the female comes up the beach but does not lay a nest). It was a tiring, truly amazing day. With breathtaking ocean front views and heartbreakingly cute turtle babies, if only we could stay a few more days. Tomorrow morning we are on the road (and canal) again, headed to a small town in Costa Rica, Talamanca, home to the indigenous BriBri people. 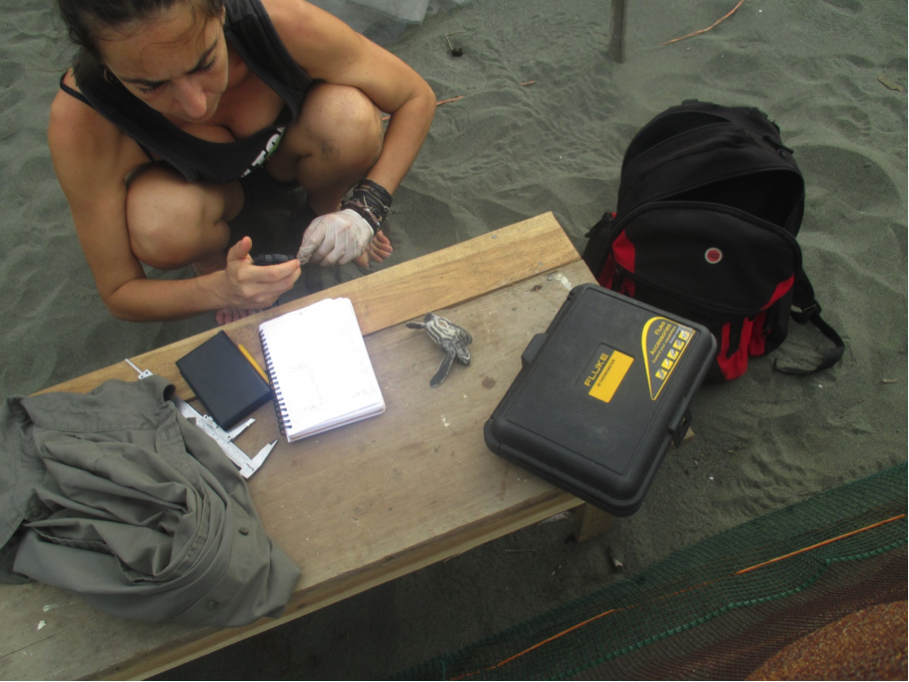 Recording how long it takes the turtle to flip over. You can do it little buddy! 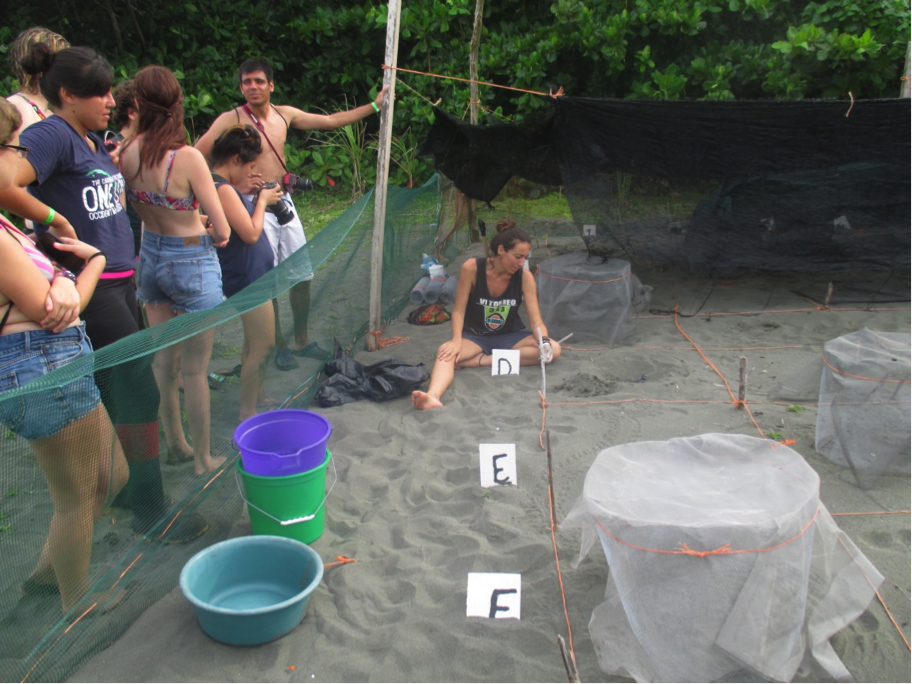 Watching the turtles emerge from the nest in the nursery. Notice the orange string marking off the transects, each with a nest inside the square, with some in the back of the photo under the man-made shade structure for the experiment. This is Marga Lopez, the marine biologist performing the experiment. 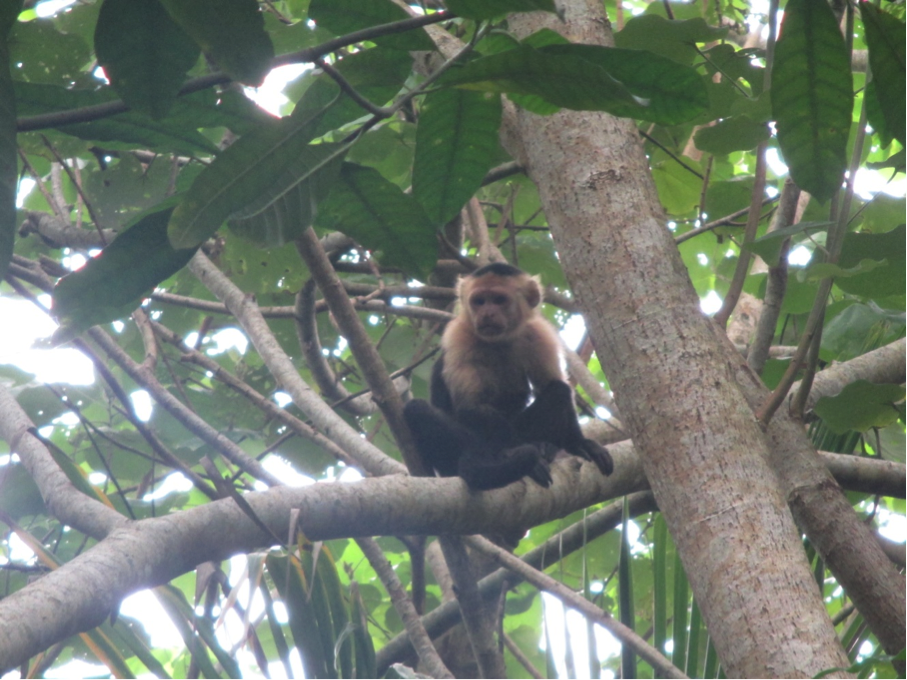 A white faced capuchin monkey in the trees off the trail. 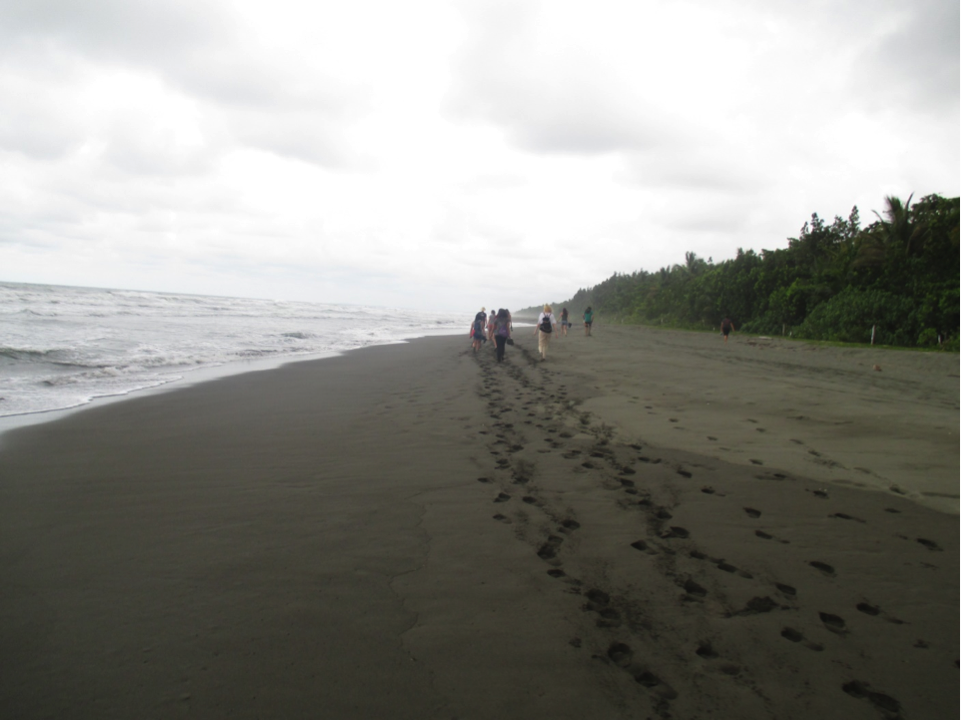 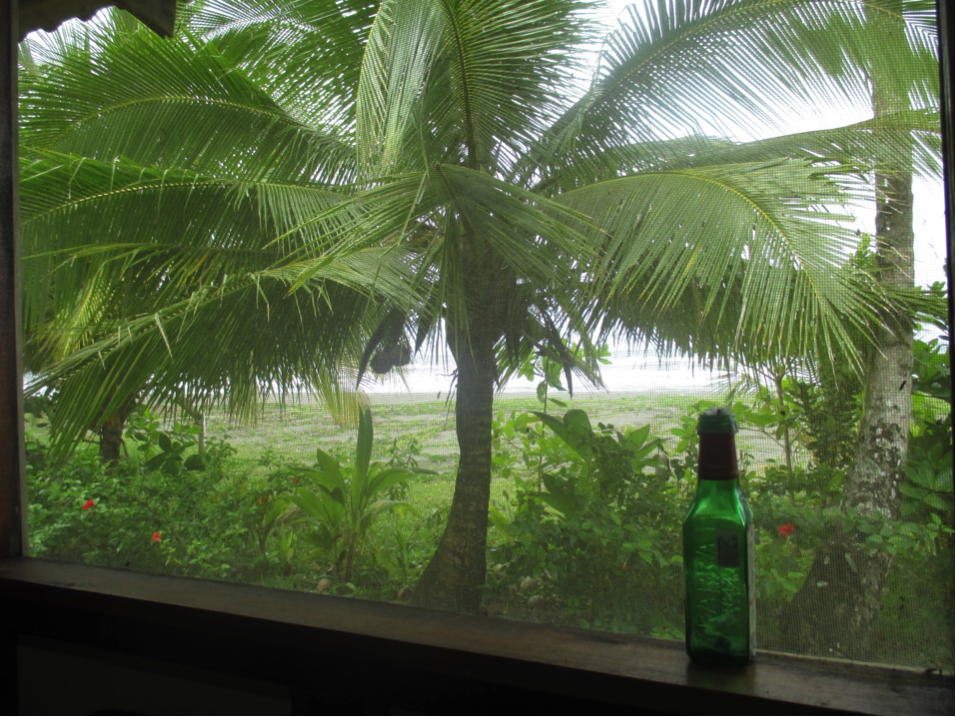 View of the ocean from the dining hall. 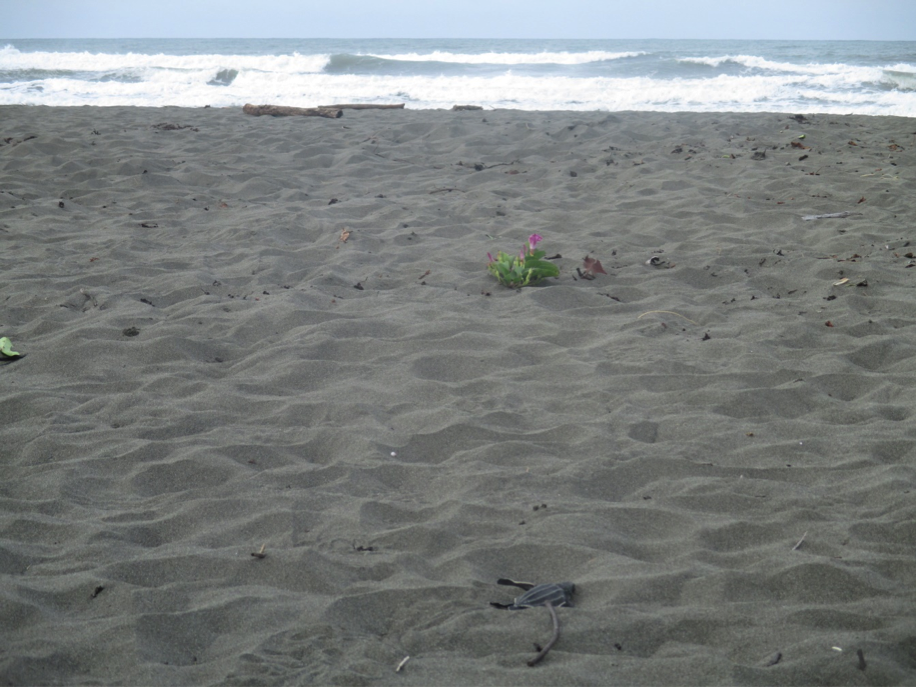 Little turtle on its journey across the beach to the water (look at those sand dunes and other obstacles!). 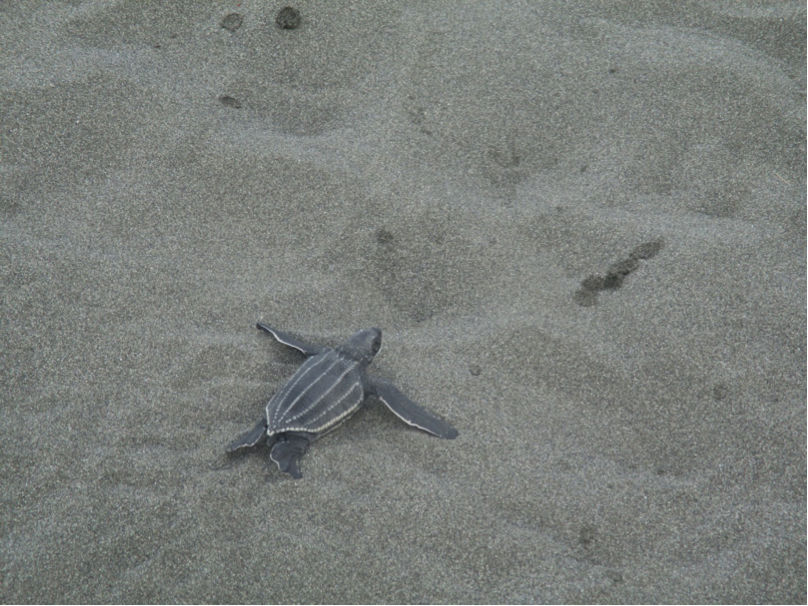 Baby leather back sea turtle after emerging from the nest, on its way into the world.