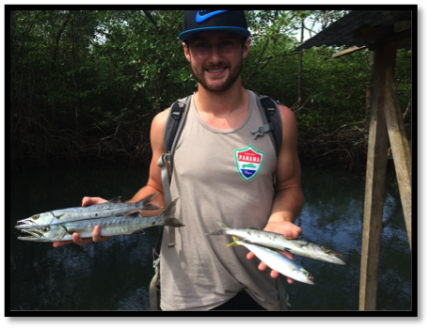 After four consecutive days of data collection the time had come for every group to lock it up and put together both the PowerPoint presentations, as well as a research paper on our findings.  The topics varied from behavioral studies on the territoriality of two specific species of damselfish to the homebodied nature of the Yellow bodied jarfish. The other topics included the population dynamics of the long-spined urchin (Diadema) and an exploratory study on the reef composition in relation to the elkhorn coral (a study that will be extended by Zoe Goozner in her Undergraduate Research project at Oxy over the summer). We (maybe I speak for myself being a senior..with senioritis) had to fight our desire to relax on our last day in order to complete the various statistical analyses and complete the project. Throughout this long day, however, there was still time to avoid the "classroom" and procrastinate a little bit.

Before the workday began, Enrique and Pete were nice enough to take Connor and I to their local fishing hotspots to satisfy our never-ending thirst for "slaying pigs". They took us out on their motorboat to a specific mangrove section where Enrique used a cast net to catch baitfish (sardines). Once we had enough bait, we rigged up our lures and trolled along Barracuda Point. The fishing gods were in our favor allowing us to catch a boatload of Barracuda and Jumping jacks. When we returned to the station we were ready to lock it up and get the remaining work done. The rest of the group went snorkeling during lunch providing another opportunity to relax a bit and take in the beautiful reef one last time.

Every group did a great job in presenting their projects through a professional and organized approach. Following the presentation we continued to relax and reminisce the amazing trip (through Banana Grams and maybe a few cervezas!).