When John Howell '71 needs to get away from it all, he disappears into the San Gabriel Mountains. Now his job is to preserve that environment for plants and wildlife as well

Twelve-year-old John Howell '71's first camping trip looked like it might be his last. His father had taken Howell and a buddy to the Red Box wilderness, deep in the Angeles National Forest. As the boys settled into their mummy bags for the night, basking in nature's preternatural quiet and gazing on stars scattered like embers across the nighttime sky, the silence was riven by a sound—and then many sounds. Something was out there. 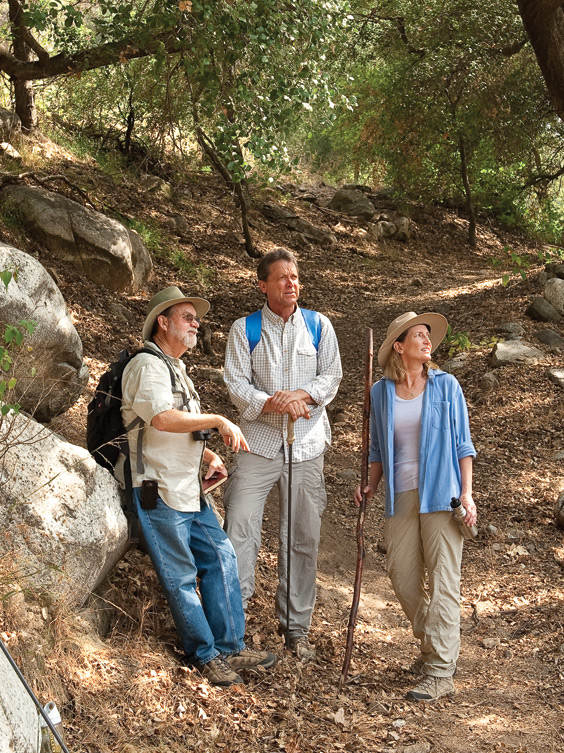 "First, we heard brush moving and the snapping of branches," Howell recalls. "Then, all of a sudden, we heard something coming toward us. We thought it was an animal clomping down the steep slope, or a boulder that was kicked loose by a bear."

Just as quickly, however, the darkness reclaimed the silence, and morning revealed nothing out of the ordinary. For Howell, the mystery helped to foster a lifelong love of wild spaces that operate by their own rules. "I thought, 'Wow, this is wildlife, this is for real. Here we are in its territory,'" he says. "We were visitors to someone else's home."

Five decades after that maiden adventure, Howell is chief executive and general counsel of an organization charged with preserving the open spaces along a roughly 10-mile stretch of foothills between La Crescenta and Pasadena. Founded by Nancy Steele '80 in 2000, the Arroyos & Foothills Conservancy has purchased 63 acres of private land, most of it since 2009. Not only do the spaces help preserve wildlife corridors through which animals travel, but they provide humans with what the late environmental advocate and writer Edward Abbey called "a radically different mode of being out there. … We cannot have freedom without leagues of open space."

"Nobody wants to see more homes in the foothills, but most of us like the idea of sitting in the coolness of an oak tree listening to a creek," Howell says. "The serenity is essential. We lead such hectic lives that nothing beats a chance to slow life down."

A real estate attorney, Howell came to the Conservancy's executive role in 2011 with ample experience at helping to acquire and preserve private lands. He completed three transactions for the San Francisco-based Trust for Public Land, a national conservation organization based in San Francisco, and he closed 14 deals for the Nature Conservancy, the world's leading conservation organization, mostly along the Santa Clara River.

The Arroyos & Foothills Conservancy bases its acquisition efforts on several criteria. Is a site home to rare or sensitive plant and animal species? Does it serve as a corridor? Are there natural water sources and plentiful coastal sage scrub, for example, which has a high potential for species diversity? Does a site have public access, and is there historical or archeological value?

For Howell, the time is now to preserve the foothills, as the region undergoes a continuing population boom. The state Department of Finance projects that Southern California's population will grow by 8 million to a total of 31 million by 2060. Clearly, open spaces are under siege, a fact reflected by the Conservancy's mission statement: "We work with urgency to save these precious places before they are gone."

The San Gabriel Mountains are home to an estimated 1,500 plant species and more than 350 bird species, according to Mickey Long, former administrator of the Los Angeles County Eaton Canyon Nature Center in Altadena and adviser to the Conservancy. Howell, he says, is an unassuming presence who works toward consensus before taking action. "A lot of people try to deflect blame, but John always deflects credit onto people he's working with," Long says. "He can bring people together, and he treats everyone just about equally, whether he's working with a developer or the most left-wing environmentalists. He makes everyone feel important. It works very well."

Growing up in Sierra Madre, Howell spent his childhood exploring nearby Bailey Canyon. He enrolled at Occidental in part to stay in sight of his beloved San Gabriels, but also because his mother, the late Ruth (Campbell) Howell '39, attended Oxy. He also believed in the importance of a liberal arts background. "One thing it teaches is that if we engage in our communities, we can make a difference," Howell says. "I'm finding that to be the case."

He majored in political science because, in his student days, geology was the only earth sciences major. Majoring in geology, Howell says, would have put him on track to work in the petroleum industry, something that didn't appeal to him. He subsequently earned a law degree—focusing on transactional real estate and business law—from Loyola Marymount University. 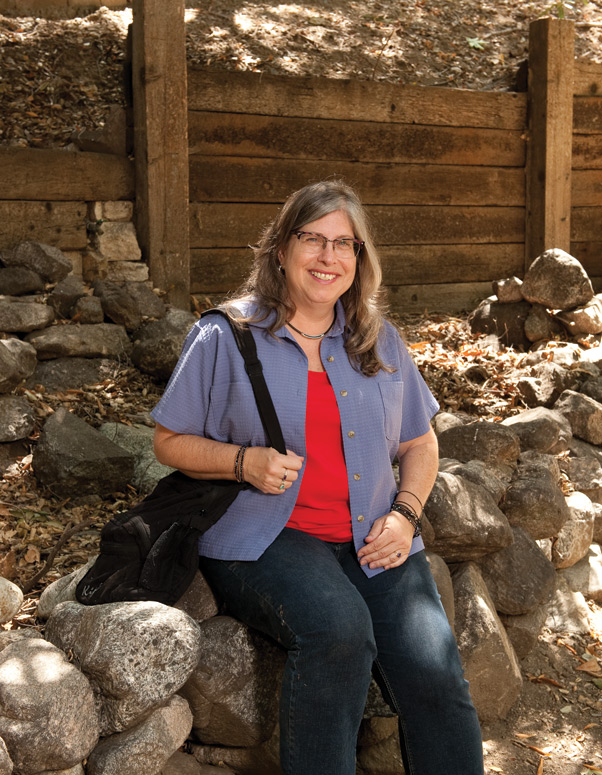 Nancy Steele, now an adviser and executive director of the Los Angeles-based Council for Watershed Health, hand-picked Howell to replace her as the Conservancy's chief executive "to take this organization to its next phase," even though her successor "had never been executive director of anything." Howell had served on the Conservancy board for two years and done legal work for the group, all the while exhibiting a passion for its mission to preserve and restore habitats.

That the two are Occidental alumni was a happy accident. "John is a guy who gets things done," says Steele (whose husband, Bruce Steele '70, is the College's environmental health and safety manager and a 28-year employee of Oxy). "It was one of those wonderful Oxy coincidences that happened because of the kinds of people that the College educates and nurtures."

Howell is now working to preserve 11 acres of wildlife corridor, called Cottonwood Canyon, in the Linda Vista area of Pasadena. Ecologists say that developing homes on the site could have a devastating impact on area wildlife, which includes mule deer, mountain lions, and bobcats. The animals rely on the open space to range from the San Rafael Hills, on the west side of the Arroyo Seco, and into the San Gabriels.

"Development would block off that corridor and create an island—a dead zone," Howell says. "Animal movement ensures a sufficient gene pool and it allows for range expansion. We're trying to be good stewards of the land and work in better harmony with Mother Nature."

(Such a dead zone already exists in the Verdugo Mountains near Oxy. Homes and the Glendale Freeway effectively block animals, unless they travel through neighborhoods, from linking with the San Rafael Hills. At the behest of the California Fish and Wildlife Service, the Conservancy is now conducting a study in hopes of one day bringing the area "back into play," he notes.)

For now, Cottonwood Canyon is the Conservancy's top priority. The group hopes to supplement $300,000 in public donations with government grants to meet the owner's $1.3-million asking price. The Conservancy has succeeded at securing funds in its last five acquisitions—including a 13-acre purchase in Millard Canyon and 41 acres in Rubio Canyon, both in Altadena, and 8 acres in La Crescenta—totaling $1,937,000. "We have every intention of being six-for-six," Howell says.

Saving land from development is only the first step of Howell's work. Each site requires "friends" groups that help maintain areas and share regional histories, which in many cases date back hundreds of years, to the days when the Tongva were the area's only human inhabitants. "Once we have secured a property, then that creates an opportunity to enhance the habitat to tell its story," Howell says, "and to create a conservation program and opportunities for people to come visit it."

Part of the conservation efforts include removing invasive plants, including Himalayan blackberry and eupatory in the Conservancy's Millard Canyon property above the Hahamongna Watershed Park in Altadena. Eupatory, a flowering plant in the daisy family, was choking off the flow of water in Millard Creek until volunteer members of the local Garden Club of America chapter helped rip it out.

John Wros '11 was working at a Patagonia apparel store in Pasadena when he heard about the Conservancy through one of the store's environmental campaigns. Wros reached out to the College to locate alumni involved in conservation and was put in touch with Howell. In short order, Wros became a docent for the Conservancy in 2013-14, leading public hikes into Rubio Canyon and the Rosemont Preserve in the Crescenta Valley and creating maps for the Conservancy that exhibit its property and corridors.

Now a lands manager for the Great Land Trust in Alaska, Wros works to identify lands worth saving—just like his mentor. "John gave me a great lens with which I can think of geology, ecology, and finding the most productive habitats in a region, and then trying to communicate the value of that to the public," says Wros, who majored in geology at Oxy. "You really have to get the commu­nity to buy into an idea and have it think you're their partner. John is a great partner to the community.

"In every single interaction I've had with John, he talks about these conservation properties as unique and special places," Wros adds. "He truly loves Altadena and Pasadena and doesn't want to see them change."

At home in Altadena with his wife of "30 wonderful years," Sally (Plehn) '76, Howell indulges in a bit of gardening: "I'm a poor grower of cymbidiums and a novice grower of succulents." He only needs to look north for inspiration, where the majestic San Gabriels, particularly late in the day, gaze down in purplish majesty.

"They seem somehow flat during the day, but toward evening they rise up and represent themselves in such a handsome way," says Howell, whose priorities are clear. "I'd rather be in the wilderness than anywhere else."