With matching gift challenges and creative engagement opportunities, The Oxy Campaign For Good responds to the obstacles of COVID-19

Following the success of the public launch of The Oxy Campaign For Good in the spring of 2019, including a daylong leadership summit on campus and campaign events on the East Coast in the days that followed, anticipation was high for Founders Day in April 2020—the next significant date on the campaign calendar. But when COVID-19 closed the campus and the College pivoted to remote learning, no one was sure whether that early momentum could be sustained virtually.

Lo and behold, Day For Oxy 2020 shattered every expectation, raising 2,597 gifts and $1.6 million to support students, faculty, and staff—including 430 new donors to Oxy. For this year’s Day For Oxy—again scheduled for April 20—Oxy aims to raise 2,021 gifts through a 36-hour event supported by giving challenges, reunion gifts, and peer-to-peer fundraising.

“The first indication that we could continue to animate activity around the campaign was last year’s Day for Oxy,” says Charlie Cardillo, Oxy’s vice president for institutional advancement. “The Oxy Fund needs to be one of our major priorities moving forward, and Day for Oxy really exemplified how caring the community is. There’s never been a more powerful gesture of good or goodness than when our community came together at that moment.” 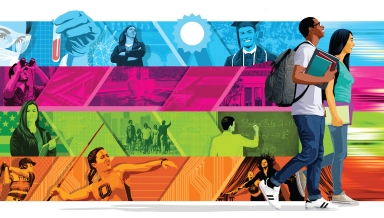 With a goal of $225 million, The Oxy Campaign For Good aims to build on the College’s location, curricular strengths, and the power of a liberal arts education. But its success will be measured by both endowment and engagement

Despite the immediate need for current-year support to help offset the operating losses associated with remote learning, the College remains committed to a balanced philanthropic approach—including $100 million in new endowment support for scholarships, internships, and research, or nearly 45 percent of the campaign’s $225 million goal. “We remain devoted to building our endowment for the long run,” Cardillo says, “and we are also looking at those core capital investments that will allow our faculty and students to continue to advance their work in meaningful ways.”

On the heels of the completion of a handful of construction projects on campus, the College is lining up its next priorities across campus. Near-term capital engagement opportunities include a proposed student success center in the lower level of the Academic Commons, acoustic renovations in Herrick Interfaith Center as it approaches its 60th anniversary, and much-needed renovations to the laboratory space in Norris Hall of Chemistry “to enable the most advanced undergraduate experience in the teaching and learning of science,” Cardillo says. A 34-member Science Task Force composed of alumni and parents is partnering with faculty and development officers to articulate a leadership vision for the sciences at Oxy and build the case for investment in science faculty, academic innovation, and capital needs.

Even though major giving has lagged compared to pre-pandemic levels—gift planning in particular has been impacted by the absence of personal interactions—support for the Oxy Fund kept pace with the previous year. Another highlight of recent months is the anonymous gift that created the Hewitt Department Chair in Black Studies, which Cardillo calls “an exciting opportunity for the College.”

There’s also the Edgerton-Occidental Merit Scholarship Program, a $9.6 million endowed fund that will make it possible for talented middle-income California students to attend Occidental for the same cost as attending the University of California. (To date, the fund has facilitated the creation of four scholarships, including a scholarship created to commemorate last year’s 50th reunion of the Class of 1971.) A second challenge, the details of which are expected to be announced soon, would encourage people to document their bequest intention at Oxy with a matching gift of $10,000 toward the Oxy Fund, which supports current expenditures. 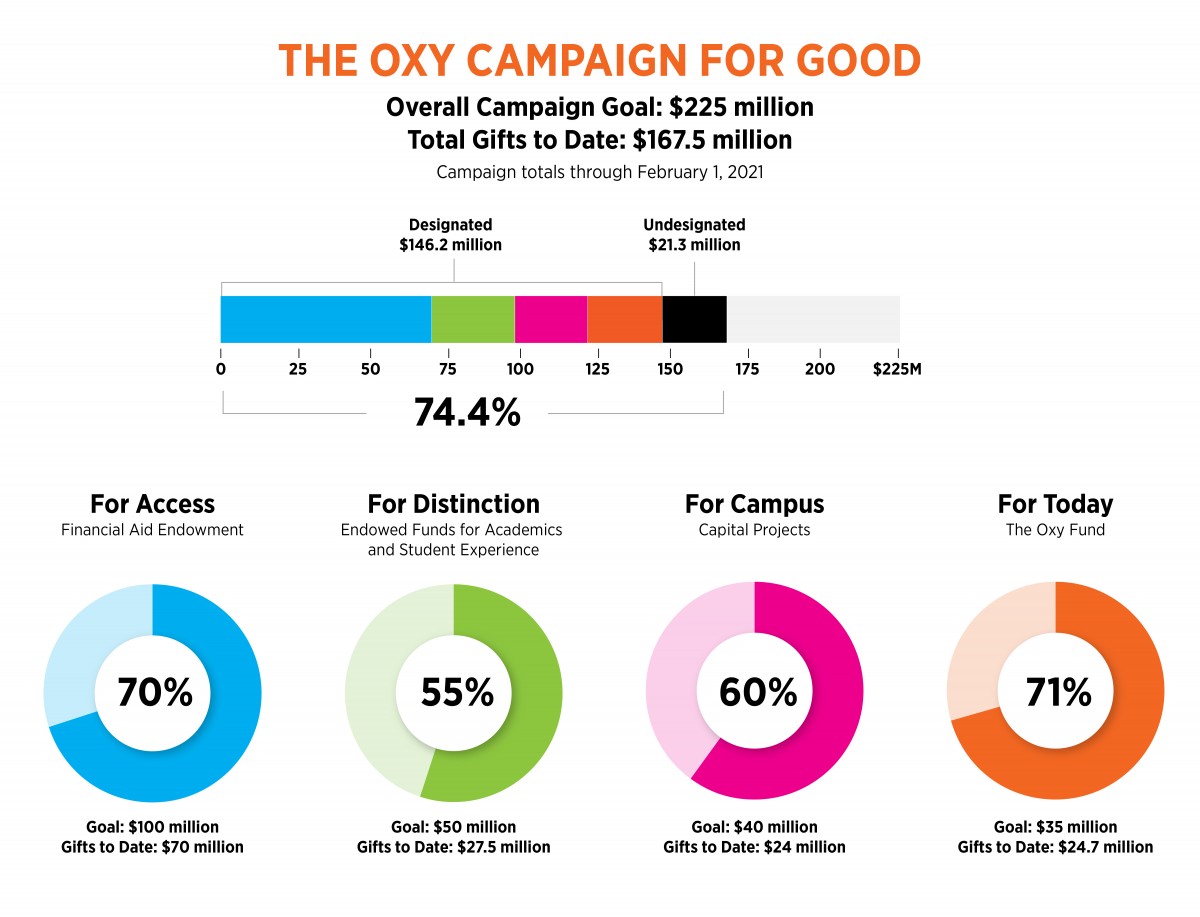 A bright spot during the pandemic has been the impact of Institutional Advancement's engagement programming—more than 40 events attracting nearly 6,000 participants since last March. A steady schedule of virtual meetings allowed President Harry J. Elam, Jr. to have robust conversations with hundreds of alumni and parents in his first six months—a feat which would have required extensive travel under normal circumstances.

“With Harry’s arrival, we have been able to attract significant numbers of attendees to a range of events as people get to know him and his emerging vision for the College,” Cardillo says. “We’re having a lot of conversations with people this semester that we hope will result in meaningful support.”

In spite of the considerable challenges posed by the pandemic, Cardillo is confident that The Oxy Campaign For Good—which is nearly three-quarters of the way to its goal—will realize its full potential. “The word 'challenges' has a double meaning—we’re in a challenged environment,” he says, “yet we have the benefit of these generous gift challenges, which will no doubt inspire giving.” 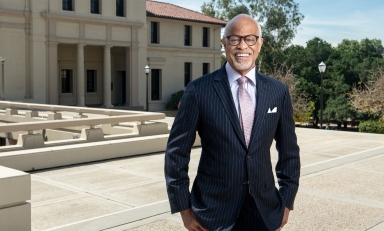