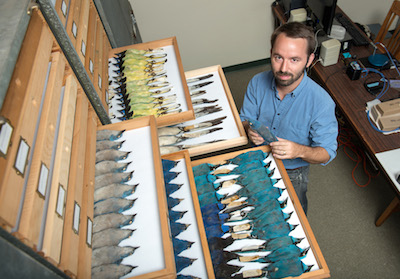 An international team, including Occidental's assistant professor of biology John McCormack, has mapped the "big bang" of avian evolution.

The genomes of modern birds tell a story of how they emerged and evolved after the mass extinction that wiped out dinosaurs and almost everything else 66 million years ago. That story –- of feathers, flight and song -- is now coming to light, thanks to an ambitious international collaboration that has been underway for four years.

The first findings of the Avian Phylogenomics Consortium are being reported nearly simultaneously in 28 papers -- eight papers that appear in a special December 12 issue of Science and 20 more in Genome Biology, GigaScience and other journals. Occidental’s assistant professor of biology John McCormack, director of the College’s Moore Laboratory of Zoology, is co-author of two of the papers.

"I was part of a small group of researchers, including Brant Faircloth at Louisiana State University and Travis Glenn of the University of Georgia, who located and analyzed conserved pieces of DNA from bird and reptile genomes in order to understand their evolutionary history," says McCormack, who also participated in a study that analyzed the molecular clock of the crocodilians, birds’ closest living relatives.

Scientists already knew that the birds that survived the mass extinction experienced a rapid burst of evolution. But the family tree of modern birds has confused biologists for centuries, and the molecular details of how birds arrived at the spectacular biodiversity of more than 10,000 species is barely known.

To resolve these fundamental questions, a consortium led by Guojie Zhang of the National Genebank at the Beijing Genomics Institute in China and the University of Copenhagen, Erich D. Jarvis of Duke University and the Howard Hughes Medical Institute and M. Thomas P. Gilbert of the Natural History Museum of Denmark has sequenced, assembled and compared the full genomes of 48 bird species. The species include the crow, duck, falcon, parakeet, crane, ibis, woodpecker, eagle and others, representing all major branches of modern birds.

"These new bird genomes are an incredible resource on their own," McCormack says. "Because the genomes are made freely available to download and study, researchers will be mining them for clues about evolution for years to come."

This first round of analyses suggests some remarkable new ideas about bird evolution. The first flagship paper published in Science, co-authored by McCormack, presents a well-resolved new family tree for birds, based on whole-genome data.

This new tree resolves the early branches of modern birds and supports conclusions about some relationships that have been long debated. For example, the findings support three independent origins of waterbirds. They also indicate that the common ancestor of core landbirds, which include songbirds, parrots, woodpeckers, owls, eagles and falcons, was an apex predator, which also gave rise to the giant terror birds that once roamed the Americas.

The second flagship paper describes the big picture of genome evolution in birds. Six other papers in Science describe how vocal learning may have independently evolved in a few bird groups and in the human brain's speech regions; how the sex chromosomes of birds came to be; how birds lost their teeth; how crocodile genomes evolved; ways in which singing behavior regulates genes in the brain; and a new method for phylogenic analysis with large-scale genomic data.

The Avian Phylogenomics Consortium has so far involved more than 200 scientists from 80 institutions in 20 countries.

Previous attempts to reconstruct the avian family tree using partial DNA sequencing or anatomical and behavioral traits have met with contradiction and confusion. Because modern birds split into species early and in such quick succession, they did not evolve enough distinct genetic differences at the genomic level to clearly determine their early branching order, the researchers said. To resolve the timing and relationships of modern birds, the consortium authors used whole-genome DNA sequences to infer the bird species tree.

"From the whole genomes, our group singled out DNA around ultraconserved regions, or UCEs. UCEs are convenient because they are easy to locate in the genomes across highly divergent species, which is what you have with the birds," McCormack explains. "Once you find the UCEs, you mine the mutations nearby in the genome to figure out which birds share common mutations, which we assume means they share a common evolutionary history. UCEs turned out to be very reliable markers for this endeavor -- better than regions of the genome that actually code for proteins."

The whole-genome analysis dates the evolutionary expansion of modern birds to the time of the mass extinction event 66 million years ago that killed off all dinosaurs except some birds. This contradicts the idea that modern birds blossomed 10 to 80 million years earlier, as some recent studies have suggested.

Based on this new genomic data, it appears that only a few bird lineages survived the mass extinction. They gave rise to the more than 10,000 modern bird species that comprise 95 percent of all bird species living with us today. The freed-up ecological niches caused by the extinction event likely allowed rapid species radiation of birds in less than 15 million years, which explains much of modern bird biodiversity.

In another study, McCormack and colleagues, including Ed Green and Benedict Paton from UC Santa Cruz, David Ray from Texas Tech University, Ed Braun from the University of Florida and Brant Faircloth from Louisiana State University, examined birds' closest living relatives, the crocodiles. This team found that crocodiles have one of the slowest-evolving genomes. The researchers were able to infer the genome sequence of the common ancestor of birds and crocodilians (archosaurs) and therefore all dinosaurs, including those that went extinct 66 million years ago.

This sweeping genome-level comparison of an entire class of life is being powered by frozen bird tissue samples collected over the past 30 years by museums and other institutions around the world. Samples are sent as fingernail-sized chunks of frozen flesh mostly to Duke University and University of Copenhagen for DNA separation. Most of the genome sequencing and critical initial analyses of the genomes have then been conducted by the BGI in China.

The genomic UCE markers McCormack and his colleagues used for these studies are the same ones being used to isolate DNA from the Moore Lab museum specimens on the Occidental campus. That means that Occidental undergraduates are working on the same DNA areas used in these landmark studies.