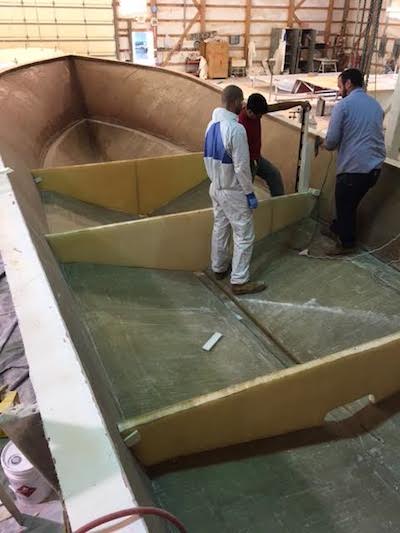 Southern California isn’t known for its lobster, but Occidental College’s marine biology program is about to take delivery of a brand-new classic New England-style lobster-fishing boat.

This $400,000 custom-built boat will be outfitted for research and scuba-diving, not lobster, however—and, if the past is any predictor, waffle-making.

The as-yet unnamed vessel is being paid for in large part by a $400,000 grant from the Keck Foundation received by the Moore Laboratory of Zoology last year. A full $220,000 of those funds were specifically earmarked for a new research vessel, which is scheduled for delivery by the beginning of 2017.

"It’s being specifically built for the program with research and scuba diving in mind," says associate professor of biology Dan Pondella ’87 M’92, director of the Vantuna Research Group. The new boat will make it possible to take larger numbers of student researchers offshore to conduct field research and collect samples. (The rest of the $400,000 pricetag will be paid for out of Pondella’s various grant monies.)

Occidental’s marine biology program currently has three boats, all of which are docked in San Pedro and King Harbor, Redondo Beach. The biggest can only accommodate seven divers. The new boat will hold at least 12. Traditional dive boats usually travel at 10 mph, while the new boat will be able to whiz to Catalina Island for diving trips in no time at up to 40 mph. It will also be large enough, at 36’x12’, to carry a research lab on board. The largest boat the College has now is 28'x10½’.

The new boat will be the College’s largest vessel since the marine biology program’s much-beloved and –beleaguered Vantuna was retired in 2004. The 85-foot wooden research vessel was 60 years old and costing hundreds of thousands of dollars a year in maintenance. "At that time it was deemed by the administration too expensive to maintain," Pondella says. "It was at the end of its useful lifespan."

The Vantuna was donated to the Southern California Marine Institute, a consortium of 22 universities, colleges and foundations in Southern California committed to providing marine expertise and hands-on experience to students, of which Occidental is a member. "They have a research vessel the same size and we have full access to that for field work," says Pondella, SCMI director.

Pondella was spending a lot of his own grant money on maintaining the Vantuna, he adds. Since then, that money has gone toward growing the marine biology program at Oxy. "We now spend money on faster, more useful boats," he says. "The program itself has increased by leaps and bounds. More students are doing research, going out on field trips. We have a much bigger staff. Ten percent of the student body takes a marine biology course now. The whole program is really blooming."

(A small but not insignificant factor in the program’s popularity is Pondella’s tradition of making waffles for students onboard ship during early-morning field trips.)

Maintenance cost for the new vessel is anticipated to be about $4,000-$5,000 a year. "We definitely picked a style of boat—with twin outboard motors—that’ll have a lower maintenance cost," Pondella says. "You just change the oil, that’s it."

Occidental will donate its smallest vessel to the SCMI, where the College will continue to have access to it if needed. "We’ll need to keep the other two boats," Pondella says. "The problem with boats is when one goes in the shop, then you can’t do anything."

Well, you can always make waffles.