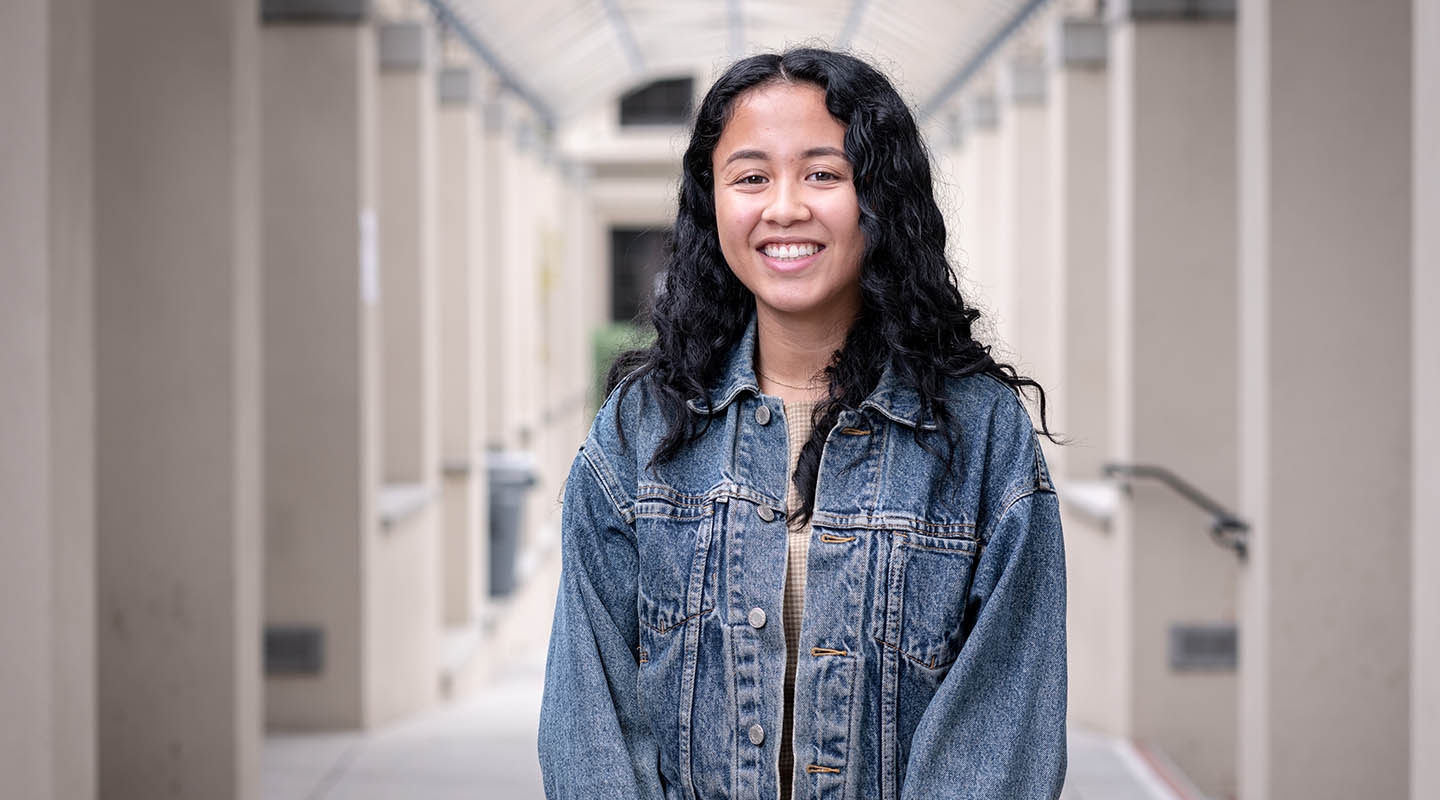 Marissa Chan has aspired to be an environmental epidemiologist since she was 17. Committed to fighting environmental injustices that disproportionately affect some communities, she’s on her way to Harvard for graduate training.

As a first-year student in an environmental health class at Oxy, Marissa was introduced to the work of Dr. Tyrone Hayes. His research showed that herbicides can disrupt the endocrine system of frogs, leading to feminization of males and other negative reproductive and developmental effects.

Marissa was inspired to explore similar research, and she was surprised to learn that certain human populations receive more exposure to environmental toxins than others.

For example, research has shown that black women in particular are the most overexposed and underprotected group when it comes to harmful chemicals in personal care products. Yet this issue is not always addressed as part of environmental justice conversations. And while she was fascinated by the issue of endocrine-disrupting chemicals in personal care products, Marissa noticed there weren’t many scientists doing this research.

“That made me realize I have a responsibility and an opportunity to work in this area,” she says. “I think it’s incredibly important to have black women scientists doing work that impacts us. After taking that public health class, I knew that this is what I wanted to do.”

A native of Northern California, Marissa was specifically drawn to Occidental’s Urban and Environmental Policy Department (UEP), and added a public health minor her first year. Working closely with Professor Bhavna Shamasunder of UEP for three years as an environmental health and justice research assistant, she oversaw data collection and analysis related to projects on urban oil drilling and environmental health. She also served as president of Oxy’s Public Health Club.

“Professor Shamasunder really supported my work and pushed me throughout my four years. She expects a lot from her students, but I really appreciated her high standards because it set me up well for my career and future research.” 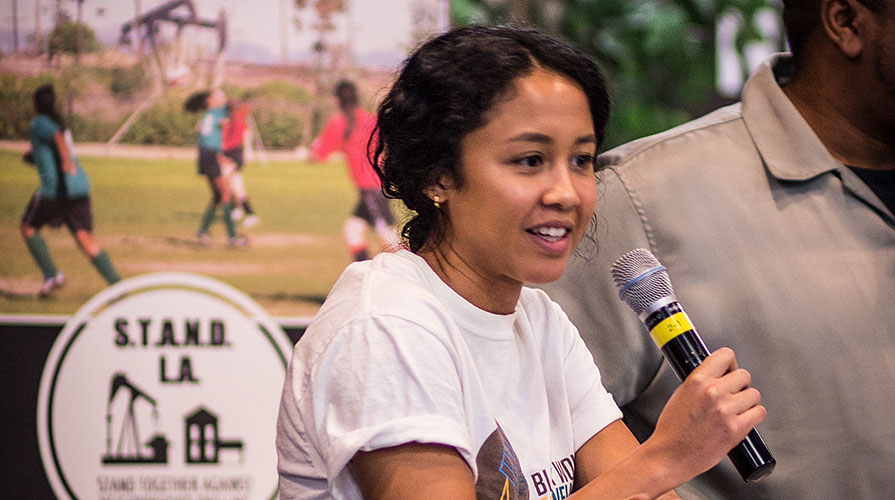 Marissa speaks at a STAND (Stand Together Against Neighborhood Drilling) community forum, where over 300 community members came together to speak to their local and state elected officials about the issue of urban oil drilling in L.A.

Marissa also worked closely with Professor James Sadd of environmental science on urban oil drilling, starting as a summer researcher and eventually joining the Stand L.A. campaign, a coalition to fight the practice in Los Angeles.

“His GIS course was pivotal to my understanding of the importance of data, and the role of letting the data speak for itself along with the community voice and narrative.”

Marissa appreciated the liberal arts approach because it allowed her to develop not only as a student, but as a person who is able to give back to society. Both the coursework and the professors contributed to that, she says.

Marissa’s senior comps research looked at the links between personal care product use and reproductive/developmental health outcomes. She focused on black girls who use beauty products when they are young, and whether endocrine disruptors in these products lead to early menarche and puberty.

Shamasunder introduced Marissa to the executive director of a South L.A. nonprofit called Black Women for Wellness, and through that organization she received research input and recruited subjects for her interviews and surveys. When she graduated from Oxy, BWW hired her as the environmental research and policy manager, supporting their work in the areas of urban oil drilling and safe personal care products.

Marissa has supported this work through community outreach education via social media, fact sheets and phone banking. With regard to personal care products, she has helped to develop policy and legislative bills, presents at conferences, and leads workshops and trainings in the community. 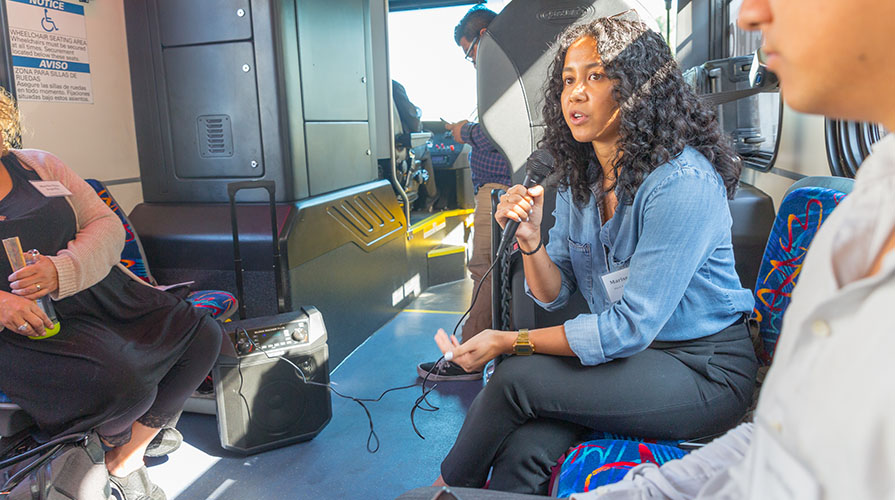 Marissa talking to participants during a CHANGE (California for a Healthy and Green Economy) tour, which visited polluting facilities throughout L.A. as well as companies that are working toward reducing toxic impact.

“I lead hairstylist trainings on things like what chemicals to avoid in salons, proper ventilation, personal protective equipment—the whole gamut around healthy hair salons and how hair stylists are particularly at risk.”

This fall Marissa, one of three Oxy alumni awarded 2019 National Science Foundation Graduate Research Fellowships, is headed to Harvard for a master’s of science degree in environmental health. Though she was accepted into several prestigious programs, she was drawn to the work of Harvard-based environmental epidemiologist Dr. Tamarra James-Todd.

“I first read about her in college, and remember thinking that she was one of the only people conducting this research while understanding the history of racial inequities in terms of exposure,” Marissa said. “I’m really excited to potentially work with her not only for the research experience, but for her experience as a black woman scientist in this field.”

After earning her Ph.D., Marissa’s dream is to be an environmental epidemiologist. Eventually she’d like to head up a branch of either the CDC or the EPA.

“I’m really passionate about being an advocate and consistently working for black women. I’m also excited to continue to learn, to continue to build on this growing body of work, and hopefully have my research impact policies around this issue that improve lives.”