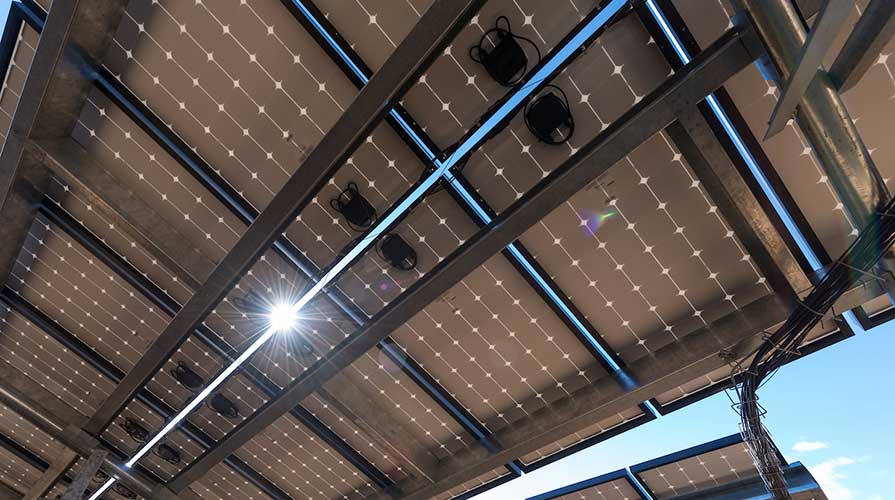 In 2012, Occidental College began work on a $6.8 million, 1-megawatt ground-mounted solar array, a project whose innovative design takes a distinctively liberal arts approach to green power with its blending of technology and art.

Oxy’s campus represents more than 130 years of character and history, with the lineage of most buildings tracing back to the early 1900s. Subsequent renovations helped ensure peak performance, though the last large-scale improvements to most of our buildings occurred more than 30 years ago.

Huge opportunities exist to substantially lower our campus energy use by updating these buildings and bringing their systems up to modern efficiency standards. The recent passage of Los Angeles’s Existing Building Energy and Water Efficiency ordinance in 2017 provides an added incentive and timeline to optimize our energy use.

Smaller energy retrofits do take place, especially as older equipment wears down. Campus Dining’s recent purchase of efficient fryers and ovens demonstrates their commitment to energy savings in addition to quality service. Beginning in Fall 2018, steam traps are being replaced and updated to warm buildings more efficiently in the winter months.

As a signal of Oxy’s commitment to sustainability, in 2014 the Board of Trustees designated $3.5 million within the endowment as the Occidental Sustainable Investment Fund (OSIF). This fund provides the revenue required to pursue large-scale energy efficiency projects. In 2018, OSIF funded an exterior lighting retrofit project in which the bulbs of 77 street lights were replaced with LEDs, cutting energy use by nearly 80%. 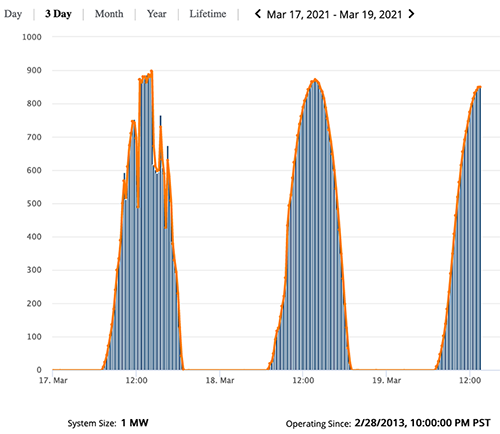 One of the most visible landmarks on the Oxy campus has generated a lot of enthusiasm—and clean, renewable energy—since its construction in 2013. Combining science, engineering and art, Oxy’s 1-megawatt, ground-mounted solar array generates 12.6 percent of the College’s annual electrical usage.

Made possible by a team of persevering faculty led by Daniel Snowden-Ifft of physics, the array has reduced Oxy’s climate impact and saved the College more than $1.3 million since its inception. To make the financing of the array a practical reality, a rebate of $3.3 million was offered by public utility LADWP in exchange for transferring the Renewable Energy Certificate to them. Nevertheless, the array’s solar power does stay on campus for our use.

In 2014, solar panels were added to the roof of the Samuelson Alumni Center, which generates one-third of the center’s electricity needs. Professor Snowden-Ifft continues the effort to expand Oxy’s solar portfolio, and if you’d like to know more, you can contact him via email.

In addition to the array, Oxy is still connected to the larger electrical grid. The climate leadership in California is working steadily to make the grid cleaner, as seen with the passage of Senate Bill 100 into law in 2018. This legislation set targets for utilities to increase their renewable energy production to 60% by 2030.

Steps for Reducing Energy Use

Another key aspect of the overall strategy to lower energy usage is changes to individual behavior. The annual Winter Break Shutdown encourages the entire campus community to unplug and power down as much as possible as people depart for the holidays. Spark the Change is a good-natured competition each spring pitting the energy-saving prowess of campus residence halls against each other.

Here are some simple suggestions that can help anyone reduce energy usage: