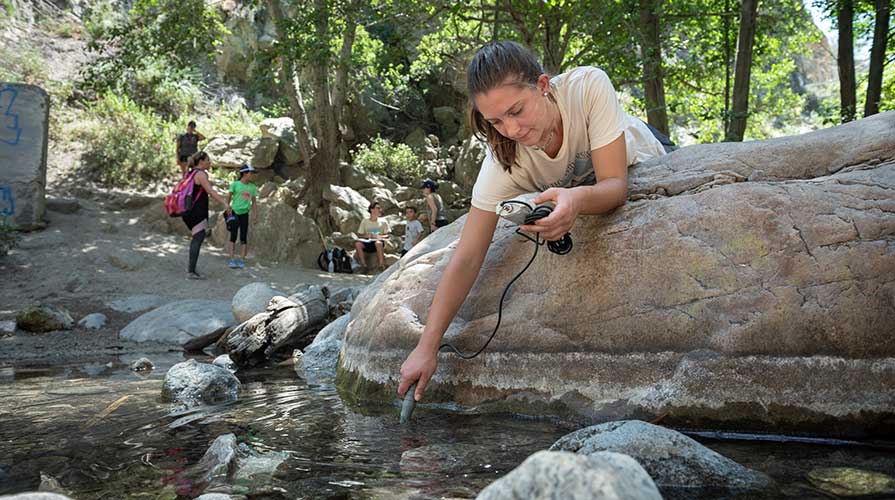 At Oxy it’s easy to incorporate sustainability themes into your education. Some related academic programs and faculty researchers are highlighted below.

The UEP minor provides the opportunity for students to understand the interconnection between "urban" and "environmental" and that issues of economic and environmental justice are integrally linked to where and how we live, work, play, eat, and go to school.

From a student-run organic garden to research on flavor and how the human mind processes it, the Food Studies minor at Occidental seeks to critically examine our relationship with food.

Explore earth processes and ecosystems as you develop environmental analysis and problem-solving skills. Undertake an Environmental Science concentration within either the Biology or Geology major.

Biology majors can pursue a marine biology emphasis, researching topics ranging from molecular methods for classification of marine bacteria to the effects of global warming on fisheries.

The relationship between the economy and the environment can be pursued through elective courses as a focus within the Economics major.

Sustainability is a topic that traverses a wide range of fields, not limited to only the sciences. To learn more, explore Oxy's 2018-19 sustainability course list.

Braker’s research interests include the ecology and evolution of relationships between plants and insects, host plants and life histories of grasshoppers, and tropical biology and conservation.

Goffredi’s research interests include investigating the biodiversity among hydrothermal vents and its implications toward seafloor mining.

McCormack seeks to unite natural history collections with genomic techniques to explore the evolutionary origins of species. His research questions involve how biodiversity is generated and the evolutionary relationships of organisms.

North investigates how plants cope with physically challenging conditions with an emphasis on the water relations of arid-land plants and plants in the rainforest canopy.

Pondella’s research interests include the ecology of California marine fishes, with an emphasis on the Southern California bight; the evolution of marine fishes in the tropical eastern Pacific; and the life history of fishes, including species from the Gulf of California.

Zellmer’s research focuses on the utility and development of computational methods for studying spatial ecological and evolutionary processes, particularly in the context of conservation biology.

Ashenmiller is an environmental economist whose research falls into three areas: recycling, evaluation of environmental programs, and energy and climate policy.

The majority of Larsen’s research involves investigating sedimentary archives to develop a greater understanding of Earth’s climate system and surface processes. He is also interested in landscape evolution and the interaction of living organisms with their physical environment.

Oze’s research revolves around ultramafic and mafic rocks and the processes these rocks undergo making their way to the surface. His investigations delves into a variety of matters including climate change, discovery of new energy resources, and carbon sequestration.

Morrissey is a moral philosopher who specializes in practical ethics and political philosophy, with areas of interest in bioethics, environmental ethics, and aesthetics.

Lang is deeply interested in food as a site for sociological exploration. His research, found in highly-regarded academic journals, involves the relationship between food, risk, trust, consumers and consumption.

Shamasunder conducts research at the intersection of environmental health and justice with a focus on inequalities faced by low-income communities and communities of color who live and work in urban and/or industrial environments.