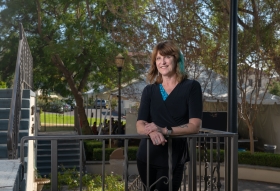 Amy Lyford’s research centers on twentieth-century American and European artistic practices, with a special interest in the histories of photography and sculpture.

She is particularly invested in exploring issues of gender, sexuality, race within modernism – and how such concepts impact identity formation, both individual and collective. Lyford is the author of two books:  Surrealist Masculinities: Gender Anxiety and the Aesthetics of Post-World War I Reconstruction in France (UC Press, 2007); and Isamu Noguchi’s Modernism: Negotiating Race, Labor, and Nation, 1930-1950 (UC Press, 2013) for which she won the prestigious Charles C. Eldredge Prize in 2015. Her current work includes essays on contemporary photographers Gilles Peress and John Divola; and she is completing a book manuscript about the American surrealist artist Dorothea Tanning (1910-2012).  Lyford’s research has been supported by numerous fellowships, including the Fulbright Foundation, Kress Foundation, Mellon Foundation, National Endowment for the Humanities, and the Terra Foundation for American Art.

Lyford’s research deeply informs her teaching and pedagogy, with courses spanning the 19th to the 21st centuries, including History of Photography, Modern and Contemporary Art, and a Faculty-Led Study abroad course on Paris-Berlin: Capitals and Crossroads of the Twentieth Century. She teaches regularly in the College’s Cultural Studies Program, mentors students in the College’s summer Undergraduate Research Program, and engages students in research-based projects that incorporate archival and digital practices.

A selective survey of Western European painting, sculpture, and architecture, from the Renaissance to the 20th century. Lectures and readings are designed to provide an overview of artistic developments, as well as how to articulate the ways in which forms of expression and modes of representation were affected by unfolding political, religious, social, cultural, and economic conditions. Major themes will include: patterns of narrative and description, strategies of realism and abstraction, the changing status of the artist, patronage and audience, and the rise of the avant-garde. Museum visits required. Not open to seniors.

This course will explore artistic practices in the U.S., North America, and Europe, during the long 19th century, from roughly 1789 to 1900. Lectures, discussions, and readings are designed to provide a thematically-driven, chronological overview of the period. Yet, the course will not be a traditional "survey," rather, it will focus on some of the key changes in ideas about artistic culture; art practice; and practices of regional, national, and transnational identity formation as expressed in visual art. This course will explore the role of art in social and political revolution, as well as its formative status as an engine of cultural imperialism in the 19th century, and, in addition will explore some of the more traditional approaches to studying the status of art, such as the role of the artist and the transformation of the art "market" in the wake of the industrial revolution. Key debates within the field of Art History will be explored, as well. Museum visits required.

What is a photograph? Is it a "document" or a "work of art"? Who makes a photograph and for whom does s/he make it? How and where do photographs circulate? What effect does the context in which a photograph is viewed have on its meaning(s)? Designed as a selective history of photography in the 19th and 20th centuries, this course revolves around questions like these (although these are not the only issues we will explore), regarding the nature and function of photography in modern culture. Through thematic lectures, a wide-ranging list of readings, and in-class discussion, we will explore the medium from multiple perspectives. Students will develop the critical skills they need to read and critically analyze the visual rhetoric that shapes photographic representations. In addition to learning about the different photographic genres - exploration and travel photography, studio and portrait work, medical and legal documentation, fine art prints, photojournalism - this class will push students to investigate photography's position within a broader cultural field: the medium's shifting relations to the artistic avant-gardes; advertising and consumer culture; constructions of race, gender, and national identity; and photography's role in producing history itself. Readings will include primary source materials and theories of photographic meaning; students will be asked to grasp not only the medium's technological and rhetorical functions, but also to develop their own critical perspectives on photography's shifting relations to intellectual, social, and political ideologies. Coursework will require one hands-on photographic project and a museum visit.

ARTH 288 Paris and Berlin: Capitals and Crossroads of the 20th Century

The cities of Paris and Berlin formed a major axis of cultural production and exchange during the early- to mid-20th century. Both were modern political and industrial capitals, and both cities were vibrant catalysts for the work of cultural producers of all stripes - from artists, writers, filmmakers, musicians, and architects, to social theorists, scientists, psychologists, and political activists. Like magnets, these two cities drew people from across the European and American continents to their streets, offering the promise of cultural ferment and collective interaction, in cities each with their own traditions of avant-garde, modernist practice. But, people also moved between these two cities, creating networks and subcultures, sharing ideas and diverse cultural perspectives, in ways that radically transformed the cultural landscapes of 20th century Europe and America. As capitals, Paris and Berlin also offer views into the major social and political upheavals of the 20th century, culminating in the transformation of a networked, intercultural model of exchange between the two cities, in the 1920's and 1930's, into an actual occupation of Paris by Berlin in 1940. In this course, we will map out these varied structures of exchange by exploring the histories of the two cities through research and analysis of key urban sites, centers, and cultural producers who lived and worked there between 1910 and 1945. Not open to frosh.

This course will focus on modernism and the avant-garde in the United States and Europe in the 20th century. Definitions of modernity, the avant-garde, and visual culture will frame our analysis of painting, sculpture, photography, architecture, and film. We will investigate these forms of visual media, paying close attention to the ways in which they engage with, critique, and negate the traditions of western art history. Issues of gender, sexuality, race, ethnicity, and the politics of art will underscore our work together in this course. We will also explore how cultural and social revolutions, emerging theories of modernism, and the important role of art criticism and art exhibition have shaped not only 20th century visual culture, but also the discourse of art history itself.

This course will explore the diverse forms of visual culture - painting, sculpture, photography, installation, performance, and video - produced after 1945. Through clusters of thematic and monographic lectures, we will investigate questions about artistic identity, the status and function of art in the post-World War II period, and the changing nature of avant-garde (and neo avant-garde) practices in the wake of the social cultural and economic changes of the 1960's and 1970's. Post-industrial society new movements advocating civil rights, feminism, and environmentalism will form the cultural backdrop of our work, as will more focused investigations of postmodernism critical theory's increasingly central role in artistic culture and a burgeoning global network of artistic and cultural exchange and contestation. In addition to presenting a selective history of visual culture after 1945, this course will explore how changing ideas about race, ethnicity, gender, sexuality, and cultural identity have impacted the art and criticism of the period under consideration. At least one field trip to a gallery or museum will be required.

This seminar will explore 19th and 20th century American art and its histories by focusing on how issues of race, gender, sexuality, and ethnicity have shaped the practices of visual artists working in the United States. We will also consider how these issues have impacted the field of Art History itself, including close attention to current scholarly debates and exhibition practices.

Open only to senior Art & Art History majors with an emphasis in History of Art.