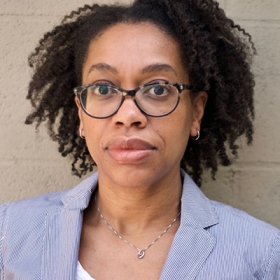 Erica L. Ball is a historian who specializes in nineteenth and twentieth-century African American history.

Ball is the author of two books. Her first book, To Live an Antislavery Life: Personal Politics and the Antebellum Black Middle Class (Georgia, 2012), interrogates the links between early nineteenth-century African American advice literature, antislavery activism, and African American processes of middle-class self-fashioning in the antebellum North. Most recently, she published Madam C. J. Walker: The Making of an American Icon (Rowman & Littlefield, 2021), a cultural biography of the groundbreaking African American hair-care pioneer, businesswoman, and philanthropist.

Erica Ball has also published two co-edited volumes. Co-edited with Kellie Carter Jackson, Reconsidering Roots: Race, Politics, and Memory (Georgia, 2017), assesses the ways that Alex Haley’s wildly popular book and its 1977 television adaptation recast representations of slavery and the Black family, reflected on the promise of freedom, and generated discussion about race, gender, violence, and power in the United States and abroad. Her most recent collection, As If She Were Free: A Collective Biography of Women and Emancipation in the Americas (Cambridge, 2020), was co-edited with Tatiana Seijas and Terri L. Snyder. This sweeping and groundbreaking volume brings together the biographies of twenty-four women of African descent to reveal how enslaved and recently freed women sought, imagined, and found freedom from the sixteenth through the nineteenth centuries. The editors of Black Perspectives included As If She Were Free on their list of “The Best Black History Books of 2020.”

Ball is currently writing a new book called Slavery in the American Imagination. The project tells the story of the contested popular memory of slavery in the twentieth-century United States and shows how African American activists, artists, and public intellectuals brought the fight against racism to the battlefield of popular culture.