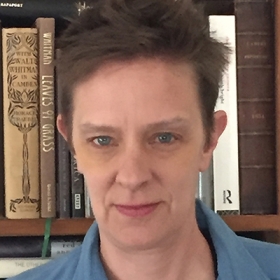 Her research interests include U.S. literature and film, queer and feminist theory, and psychoanalytic criticism.

The Critical Theory and Social Justice colloquium introduces students to the CTSJ major. Students will engage with topics and materials in the areas of emphasis within the major: Critical Race Studies, Gender and Queer Studies, and Postcolonial Studies. All CTSJ faculty will engage with students in this course.

This class is designed to introduce the classical texts of Anglo-American queer theory, as well as explore recent trends in the field. While situating queer theory's 1990's academic advent in its historical context of identity politics, the emergence of the AIDS pandemic, and the U.S. "culture wars," the course will begin by reviewing crucial antecedents in gay and lesbian studies, psychoanalysis, and the interventions of Michel Foucault. Readings will include works by Judith Butler, Eve Sedgwick, Leo Bersani, Lee Edelman, and Teresa de Lauretis. Additional readings will trace recent debates over "what is still queer in queer theory?" as critics engage ongoing questions about neoliberalism, homonormativity, and politics, in the 21st century. Emphasis topic: Feminist and Queer Studies.

This course introduces students to literary questions of queerness, canonization, and nation, in the context of the United States' 20th century discourses about homosexuality. Students will critically analyze the production of certain ideas of the nation through literature by examining questions raised through queer texts. The course will run concurrently with CTSJ 333: The Queer Novel; assignments for CTSJ 233 will be designed for a 200-level course. Emphasis Topic: Feminist and Queer Studies.

Is there such a thing as a "woman's condition" and can that condition be explained by examining the economic dimensions of women's history? Is the violence that people are disproportionately exposed to, based on gender, race, sex, and sexuality, only a tool in the production and reproduction of economic classes, or do these identities and experiences require an analytic framework that transcends economic relations? In this course, we will consider a particular intellectual tradition that engages these questions: materialist feminism. We will begin our readings by considering texts by Marx and Engels that form the backbone of this tradition. We will then consider texts from American, British, and Italian traditions of thought and activism that include feminists working in national and transnational women of color traditions. Readings will include: Michèle Barrett, Hazel Carby, Carolyn J. Eichner, Silvia Federici, Combahee River Collective, Mariarosa Dalla Costa and Selma James, Angela Davis, Friedrich Engels, Rosa Luxemberg, Karl Marx, Heidi Hartmann, and Denise Riley. Emphasis Topic: Feminist and Queer Studies.

This course is an introduction to feminist rhetorical history and criticism as it foregrounds the study of how women "stand and speak" using rhetorical strategies to address social and cultural issues that impact them. This class positions the study of feminist rhetorics within the larger study of language and discourse theories as we examine how social relations, power, knowledge, and identities are constituted through private and public rhetorical acts. Through our readings, we will engage a wide range of contributions to a rhetorical critical history by women who, either as practitioners or theorists, advanced their visions of social change and acted to implement them. Course readings will begin in antiquity to provide a foundation for our study, though much of our material will focus on texts from the 19th century to the present, to examine the intersections of gender and rhetoric. Through this work, we will challenge the seeming erasure of women from this critical history, and interrogate the notion of "feminist rhetoric" as merely a corollary to a masculinist tradition. Assignments will include critical essays and a visual rhetoric project on representations of women in the media and popular culture.

The course takes an interdisciplinary approach to the last decade's increasing attention to Los Angeles as a historical origin point of United States' LGBT history. Students are encouraged to "queer" the very concept of the archive by considering how minority voices and experiences register themselves across time, through both traditional archives and less formal communities of readership and historiography, wrought through alternative archives like pulp novels, comics, films, and even gossip. Students will be training in physical archival work, oral history, digital story telling, and mapping, all while considering the impact of the "Digital Revolution" and how LA's particularly intersectional queer communities have mapped themselves across the so-called "digital divide." In addition to individual papers and presentations, the class will produce a "mixed media archive" as a student group final project that will both yield an exhibit at the end of the semester and serve as a template for an ongoing "queer LA archive" housed at Oxy. Satisfies the experiential learning requirement for the Critical Theory and Social Justice major. Emphasis topic: Feminist and Queer Studies.