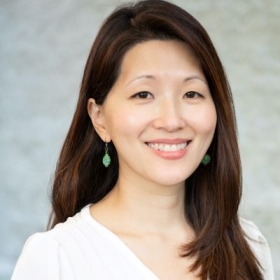 Monday and Wednesday 4:00-5:30pm via Zoom. Please email professor for the link.

Jane Hong is a historian of U.S. immigration and engagement with the world, with a focus on Asia after World War II.

Hong is an associate professor of modern U.S. history and the author of Opening the Gates to Asia: A Transpacific History of How America Repealed Asian Exclusion (University of North Carolina Press, 2019). She serves on the editorial board of the Journal of American History, the executive board of the Immigration and Ethnic History Society, and the Gilder-Lehrman Scholarly Advisory Board. A public-facing historian, she appears in two episodes of the Peabody Award-winning PBS docuseries, Asian Americans (2020), and the PBS World documentary Far East Deep South (2021). An active public speaker, Hong has presented at Uber, the Brookings Institution, CohnReznick, Analysis Group, and the Leadership Council on Legal Diversity, in addition to academic and faith-based venues. She is committed to bridging academic and public history. Her work in this area includes leading K-12 teacher seminars for the Gilder-Lehrman Institute of American History, consulting for television programs including Finding Your Roots with Henry Louis Gates, Jr. and American Idol, and penning op-eds for the Washington Post and the Los Angeles Times.

Hong’s first book, Opening the Gates to Asia: A Transpacific History of How America Repealed Asian Exclusion (University of North Carolina Press, 2019), situates the transnational movement to repeal America’s Asian exclusion laws in the context of black civil rights struggles at home and U.S. military intervention in a decolonizing Asia. It argues that repeal was part of the price of America’s postwar empire in Asia. Even as the United States expanded its power over Asian peoples, the demands of building and sustaining this imperial reach compelled U.S. officials to respond to the antiracist and anticolonial demands of nonwhite peoples—if only in the most symbolic and performative ways. A multi-archival study, the book draws upon research conducted in the United States, India, and the Philippines.

Hong’s current book project (under contract with Oxford University Press) uses the history of Asian American evangelicals as a lens to explore intersections of race, religion, and politics since the 1970s. Model Christians, Model Minorities: Asian Americans, Race, and Politics in the Transformation of U.S. Evangelicalism (title tentative) considers how post-1965 Asian immigration has changed U.S. evangelical institutions and politics. Asian Americans are the fastest growing racial group in the country. They are also one of the fastest growing populations within U.S. evangelicalism. Today Asian Americans lead the National Association of Evangelicals, InterVarsity Christian Fellowship, and Evangelicals (now, Christians) for Social Action, among other flagship organizations. Yet little is known about them and their history in the United States. Drawing from archival research and over one hundred oral history interviews, Hong charts how Asians and Asian Americans have changed Christian higher education, parachurch organizations, church denominations, national evangelical organizations, and faith-based political lobbies. In so doing, her work connects two developments that have reshaped racial and religious politics in America over the past fifty years: the rise of the Religious Right and the demographic transformations resulting from the 1965 Immigration and Nationality Act. This research has been supported by the UCLA Asian American Studies Center and the Louisville Institute.

Hong is a 2022-2023 Public Fellow in PRRI’s Religion and Renewing Democracy Initiative.

"What the Election of Asian American GOP Women Means for the Party" ("Made by History" column), Washington Post, March 8,2021

“In Search of a History of Asian American Evangelicals,” Religion Compass (December 2019): 1-9.

Opening the Gates to Asia: A Transpacific History of How America Repealed Asian Exclusion (University of North Carolina Press, November 2019).

“’A Cross-Fire between Minorities’: Black-Japanese Relations and the ‘Empire Quota’ in the Postwar Movement to Repeal Asian Exclusion,” Pacific Historical Review 87:4 (Fall 2018): 667–701.

“The 1952 McCarran-Walter Act” and “Asian American Views of Incarceration,” in Densho Encyclopedia of Japanese American Incarceration.