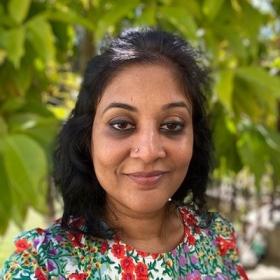 Leila Neti teaches in the fields of postcolonial Anglophone literature and theory, 19th and 20th century British literature, and literary and cultural criticism.

She specializes in Victorian literature, contemporary Anglophone literature, postcolonial theory, and law and literature. Her research focuses on how legal formations intersect with literary representations to produce notions of self and sovereignty, particularly with respect to race, gender, class, and sexuality. Her essays have appeared or are forthcoming in differences: A Journal of Feminist Cultural Studies, Interventions: International Journal of Postcolonial Studies, Law and Literature, Law and Humanities, and in various edited collections.

Professor Neti teaches classes including “Race, Law, and Literature,” “The Animal,” “The Contemporary Anglophone Novel,” and “Bollywood Cinema and the 19th Century Novel,” as well as survey courses in Literary Methodologies and Modern British Literature.

“'If you were an animal you would have eaten me': Animal’s People and the History of Corporate Colonialism". In Law and Humanities (forthcoming, 2021)

'The Love Laws': Section 377 and the Politics of Queerness in Arundhati Roy's The God of Small Things. In Law and Literature. London: Taylor Francis, 2016

“Siting Speech: The Politics of Imagining the Other in Meera Syal’s Anita and Me” in British Asian Fiction: Framing the Contemporary, ed. Wai-Chew Sim and Neil Murphy.  London: Cambria Press, 2008.

"Oscar Wilde and the Secret Language of the Law." Oscar Wilde, Sexuality, and the State. Clark Library. May 2020. Invited Lecture. (Cancelled due to Covid-19).

“Life at the Margins of the Human.” Literature and International Law.  London School of Economics. July 2019.

“The ‘Minute’ and the Penal Code: Macaulay’s Project of Biopolitics in Colonial India.” Law, Culture, and the Humanities Conference.  Stanford University. April 2017.

“Bottled Up: The Fluidity of Capital in Mohsin Hamid’s How to Get Filthy Rich in Rising Asia.” American Comparative Literature Association.  New York, New York.  April 2014. Panel co-chair and presenter.