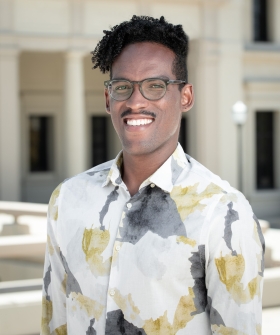 Before joining the faculty of Occidental College, Professor Murphy was an assistant professor of sociology at the University of Pittsburgh where he taught courses on Social Theory, Environment and Society, and Critical Environmental Justice. At Oxy, he teaches courses on Race and the Environment, Black Ecological Thought, Blackness and Anarchism, Du Boisian Social Theory and Analysis, among others. Professor Murphy’s pedagogy is animated by the assumption that social knowledge is most powerful when it encourages our capacity to critically reflect upon the intersection of human meaning and action within broader, ever-changing sociohistorical and ecological contexts. Thus, whether advising student theses, collaborating with research assistants, or working with students in the context of a single course, he always encourages students to develop their practice of asking critical questions, looking for answers, and effectively communicating what they have found.

Professor Murphy’s research utilizes comparative, historical, ethnographic, spatial, and visual methods to study the socioecological implications of racialization, colonialism, and slavery in the modern world. He is also interested in the politics and sociology of racial and environmental knowledge. His scholarly writing has been published in Environmental Justice, The Journal of World-Systems Research, Political Power and Social Theory, and Environmental Sociology, in addition to other academic journals. He is currently working on his first book project, The Plantation Problem: An Inquiry into the Environmental Significance of Race, which points to the limits of prevailing modes of thinking about race and environment that are mired by colonial unknowing—mainly, onto-epistemological assumptions about race that deflect attention from the ongoing significance of colonial/imperial domination. This book, by contrast, attends to Rhode Island’s colonial present and past, to shed light on the environmental significance of race with an anticolonial mode of inquiry that is contextual, relational, and perspectival.