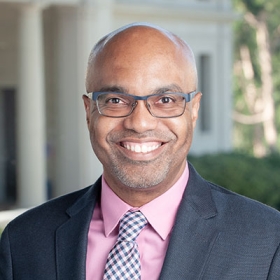 Ron Buckmire has spent multiple decades in higher education, gathering experience and expertise as a teacher, researcher and administrator.

Ron Buckmire is Professor of Mathematics at Occidental College (Oxy) in Los Angeles, California. Ron holds mathematics degrees (Ph.D., M.Sc. and B.Sc.) from Rensselaer Polytechnic Institute. He has been on the Oxy faculty since 1994, serving as chair of the mathematics department twice and achieving the rank of Full Professor in 2014 after beginning his academic career at Oxy as a Minority Postdoctoral Scholar-in-Residence. He was Associate Dean for Curricular Affairs and Director of the Core Program for four years (2018-2022) in charge of all aspects of the curriculum and reporting directly to Oxy’s chief academic officer, Wendy Sternberg. As Associate Dean, his primary responsibility was the direction of the general education program and he had several other academic initiatives reporting to him. He was an employee of the United States National Science Foundation (NSF) from 2011-2013 and 2016-2018. At NSF, he was a Lead Program Director in the Division of Undergraduate Education where he headed the S-STEM program and was responsible for the undergraduate mathematics education award portfolio.

He has manitained a productive research career in applied mathematics for nearly 30 years. His primary research interests are in numerical analysis, scholarships of teaching and learningm, and mathematical modeling. Most recently he has started working in the area of data sceince, focussing on its intersections with social justice. He is a passionate advocate for broadening the participation of historically excluded groups (especially LGBTQ+ individuals and racial/ethnic minorities) in mathematics and other STEM disciplines. He serves the broader mathematics community in several capacities, such as Vice-President for Equity, Diversity and Inclusion (EDI) at SIAM, Chair of the AMS Committee on EDI, Chair of MSRI’s HRAC, member of BIRS’ EDI board and ICERM’s board of trustees. He is a co-founder and board member of Spectra, the association for LGBTQ+ mathematicians and their allies. He has over 30 years of experience as an LGBT rights activist, serving on the boards of organizations such as Equality California, the International Gay and Lesbian Human Rights Commission (now OutRight International) and Health Justice.

PROFESSIONAL ACHIEVEMENTS
He is the co-editor of the book Improving Applied Mathematics Education (Springer Nature, 2021) and has published  over two dozen peer-reviewed articles, book chapters, and reviews in an eclectic collection of outlets such as Data, Notices of the American Mathematical Society, Numerical Methods for Partial Differential Equations, IMA Journal of Management Mathematics, Works and Days and the Albany Law Review. From 2011 to 2013 and from 2016 to 2018 he served as a Program Director in the National Science Foundation (NSF)'s Division of Undergraduate Education (DUE) in the Washington, DC area. After his first stint at NSF, he organized the writing and submission of a successful NSF S-STEM proposal as Principal Investigator (PI), DUE-1457943, which brought in over $600,000 primarily for scholarships for academicaly talented but financially needy students to pursue degrees in science and mathematics at Occidental College from 2015-2020. In 2020, he was co-PI on another successful S-STEM proposal, DUE-2030763, which awarded $1,000,000 to Occidental College to investigate and implement interventions to support financially needy, academically talented students majoring in STEM disciplines. In 2021, he published his first book, Improving Applied Mathematics Education (Springer Nature) as co-editor. In 2022, the Mathematical Sciences Research Institute (MSRI) published his second book, Math & Racial Justice: the role of Mathematics in Today’s Movement for Racial Justice, the compendium of the virtual 2021 Mathematics and Racial Justice workshop co-organized by Ron and four other African-American mathematicians at MSRI.

SERVICE
Buckmire currently serves (or has served) on multiple committees to promote diversity, equity and inclusion in mathematics at national organizations such as the Committee on Minority Participation in Mathematics at the Mathematical Association of America (MAA) and the Diversity Advisory Committee of the Society for Industrial and Applied Mathematics (SIAM). He is frequently called upon to serve as a subject matter expert and reviewer for numerous agencies and grant programs (U.S. Department of Education, California Board of Education, National Science Foundation). He also served on the SIAM Education Committee for nearly a decade. He was the co-chair for the SIAM Applied Mathematics Education conference scheduled for July 30-August 1, 2020 in Philadelphia, PA (co-located with Mathfest 2020) which was cancelled due to COVID-19. He will serve as SIAM's first Vice-President for Equity, Diversity and Inclusion and chair of the SIAM Membership Committee until December 31, 2021. He is co-chair of the Broadening Participation Advisory Committee of the Mathematical Sciences Research Institute (MSRI), the American Mathematical Society (AMS) Committee on Equity, Diversity and Inclusion (CoEDI) and on the board of directors of Spectra, an organization for LGBTQ mathematicians, and a member of the board of trustees of the Institute for Computational and Experimental Research in Mathematics (ICERM) and (ex officio) for MSRI.

TEACHING
Buckmire's teaching interests lie primarily in teaching mathematics context where application is important. He has taught courses in calculus, differential equations, complex analysis, mathematical modeling, applied mathematics and the history of mathematics. He is interested in the implementation and study of innovative pedagogical techniques to improve student learning outcomes, especially in undergraduate mathematics courses. The scholarship of teaching and learning is an active reseach interest. He is a strong supporter of the ethos of a liberal arts education and has taught first-year seminars multiples times, with titles such as "Race, Gender and Justice" (1997, 1999, 2002), "LGBT Rights in the Era of Obama and Google" (2009, 2010) and "#CSP6: LGBT Rights in the Internet Era" (2013).

ADMINISTRATIVE ACCOMPLISHMENTS
As an administrator, some of Buckmire's organizing principles are "leave the campground cleaner than you found it" and "don't let the perfect be the enemy of the good." He believes strongly in fostering and supporting a culture of continuous improvement wherever he works. In summer 2018, Buckmire began his role as Associate Dean for Curricular Affairs (ADCA) and Director of the Core Program at Occidental College. In his capacity as ADCA, he is responsible for multiple curricular and co-curricular projects at the College. For example, the Writing Program, the Center for Community Based Learning, Oxy Arts, the Institute for the Study of Los Angeles, the Urban and Environmental Policy Institute, the Community Literacy Center, the Undergraduate Research Center and the Core Program all fall under his purview. As Core Director, he is responsible for the Core Program, which is composed of the general education requirements at the center of an Occidental College liberal arts education. Additionally, the Core Program includes the Cultural Studies Program, which consists of 2 required first-year seminars that are limited to 16 students, taken by entering first-year students and address issues of identity, culture and difference, include significant expectations of writing and introduce students to college-level intellectual engagement.

In the 2020-2021 academic year Buckmire helped manage a process that led to the first substantive changes to the Core Program in over a decade. The CSP was renamed the First-Year Seminar (FYS) program and for the first-time ever First-Stage Writing Requirement was radically overhauled. Working with the Writing Programs Director and Core Program staff, the Timed-Writing Exercise was eliminated and a new system where students submit an electronic portfolio of essays written in their first-year seminars that demonstrate what they believe is evidence that they have met the published criteria and rubric for completing the requirement. Portfolios are assessed in a double-blind fashion by a select group of faculty who go through a training to apply the rubric on portfolios in a normative fashion. Results with the new system have not greatly varied from the previous assessment but students have much more agency in the new portfolio-based system.

From summer 2016 to summer 2018 Buckmire served as a federal employee as a (permanent) program officer at NSF. While there he was the Lead Program Officer for the NSF Scholarships, in Science, Technology, Engineering, and Mathematics (NSF S-STEM) program. S-STEM is a federal program to support the academic success of low-income, highly qualified students who are majoring in a STEM discipline at institutions of higher education in the United States. During his stewardship, over $250 million was awarded to colleges and universities to run projects to support low-income, academically talented STEM majors attain associates, baccalaureate and graduate degrees. In addition to S-STEM, Buckmire worked on the Improving Undergraduate STEM Education (IUSE) program, making funding decisions to award approximately $5-10 million in grants per year  to improve undergraduate mathematics education around the country.

From 2005 to 2010 and again from 2015-2016 he served as the chair of the mathematics department at Occidental College. During that time he was responsible for the revision of the mathematics minor, making it one of the most popular minors on campus.