Birds of a Feather | Occidental College

Birds of a Feather 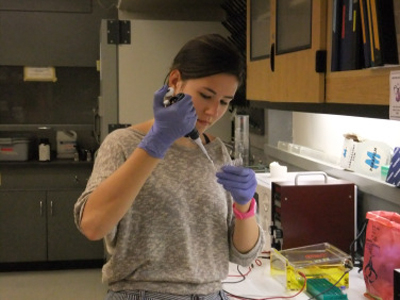 A unique collaboration between the history department and the Moore Lab of Zoology gives students the opportunity to learn what genetics, geography and birds can reveal about the native peoples of Mexico.

Leave it to a liberal arts student to make the connection between pre-Hispanic Mexican history and avian phylogenetics. After taking history Professor Lisa Sousa’s course Indians of Mexico (Hist 355) in spring 2013 and subsequently working in Occidental’s Moore Laboratory of Zoology, home to the largest Mexican bird collection in the world, Jessie Salter ’14 realized that her fellow students could also benefit from exposure to both fields of study.

"One of the things I’ve loved the most about Oxy is working in the Moore Lab. The other was taking this class," says Salter, a biology major from Chicago.

Salter approached Souza and Moore Lab curator and biology Assistant Professor John McCormack with the idea of combining the two fields of study. The result is a collaboration between two faculty members from seemingly disparate disciplines working in areas with real commonalities. Together with Moore Lab collections manager James Maley, they are exploring the use of feathers in indigenous Mexican cultures such as those depicted in the Florentine Codex, a 16th-century manuscript that served as an illustrated encyclopedia of the New World.

Both Souza and McCormack say that the collaboration was a natural fit, and students walk away with new perspectives that arise from synthesizing information from history and biology.

"I think we were both immediately excited because the synergy between our courses and research was so clear. It wasn't a stretch at all," McCormack says.

"Oxy’s small size makes it possible for faculty to get to know one another across campus," says Sousa, who specializes in colonial Latin America, indigenous peoples of Mexico and women’s history. "Also, the collection is a treasure. That makes it really special."

During one of McCormack’s guest lectures in early February, the subject turned to the vibrant green feathers depicted on the Aztec leader Moteucçoma’s headdress in the Florentine Codex. The students learned that the brilliant plumage came from the Resplendent Quetzal, a bird native to southern Mexico. Souza pointed out that the Aztec leader was displaying an expansion of territory with his costume.

Salter, who now serves as a class assistant, says that she is happy to see how the collaboration has been unfolding over the semester. "It’s kind of the ethos of Oxy in a lot of ways," she says.

"Oxy has positioned itself as a defender of the liberal arts education at a time when that view is being questioned in some quarters," says McCormack. "Bringing together biology students and history students is the essence of the liberal arts. It's about teaching students how to think, how to keep an open mind, how to see data from many perspectives, how to innovate."