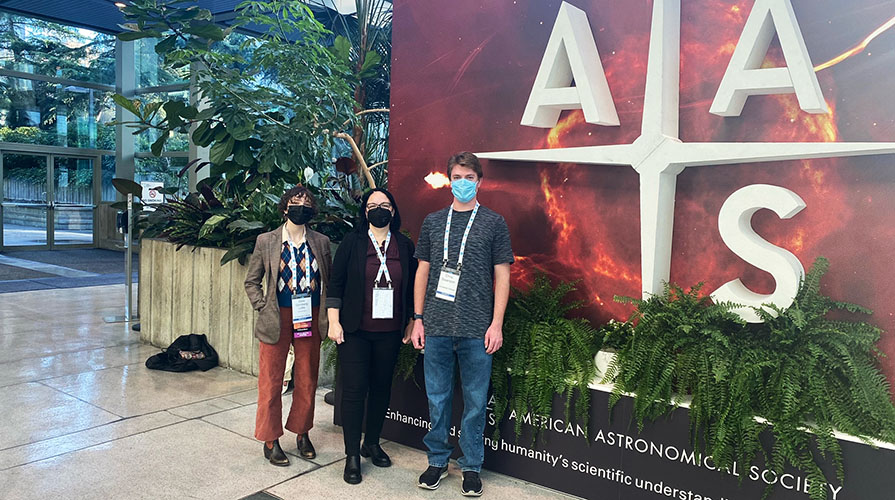 Assistant Professor of Physics Sabrina Stierwalt was invited to give a plenary speech at the American Astronomical Society conference while her students presented their original research.

This January, Stierwalt and three students attended the 241st meeting of the American Astronomical Society, which took place Jan. 8-12 in Seattle, Wash. The annual meeting for the main professional society for American astronomers, there were nearly 3,000 astronomers, educators, students and journalists in attendance. The conference featured a variety of scientific presentations, workshops and town hall meetings.

Physics majors Chris Swanson ’25 and Zelie Goldberg Little ’25 gave poster presentations of their research while Occidental Science Scholar Tehreem Hai ’23 was slated to give an oral presentation (she ended up doing her presentation virtually due to illness). All students presented research that they had conducted through Oxy’s Undergraduate Research Center. They are also interested in science communication, which made for a great opportunity to practice their skills.

Goldberg Little, who is double majoring in physics and Media Arts & Culture (production), is particularly interested in science communication.

“AAS was a really exciting opportunity for me to engage with a lot of really good communicators as well as share my own research,” she says. “I presented a poster on my research, where I used telescope data to identify candidates for dwarf galaxy groups. Presenting in front of so many professional astronomers made me very nervous, but once I got comfortable I had a great time sharing my findings with people who all shared a common passion for space.”

Stierwalt was chosen to give a plenary or keynote speech, which is a significant honor for a professional astronomer. Only 16 of AAS’s 8,200 members are invited to give a plenary talk at the annual winter meeting. She spoke on the topic of dwarf galaxies, the small star systems that eventually merge to form more massive galaxies like our Milky Way, and she received a standing ovation.

“I am thrilled to have had the opportunity to put the research we are doing at Occidental on a national stage—the biggest national stage we have in Astronomy,” Stierwalt says. “It was also a proud moment for me as a mentor to see Tehreem, Zelie, and Chris present their work so confidently and field questions from experts.”

Stierwalt is an observational astrophysicist who researches the internal and environmental processes driving star formation in nearby galaxies. She uses multi-wavelength observations from the X-ray to the radio to understand how gas is converted into stars, particularly in the low metallicity environments of dwarf galaxies. She leads the NSF-funded program TiNy Titans, the first systematic study of the gas dynamics and star formation in interacting dwarf galaxies.

Stierwalt also works to make science and the stars more accessible through a program to bring an inflatable planetarium to communities that have been historically excluded in STEM. 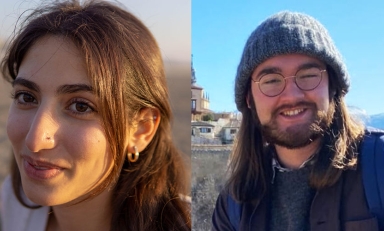