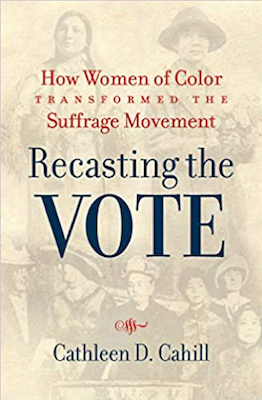 Recasting the Vote: How Women of Color Transformed the Suffrage Movement is the first lecture in a three-part speaker series on Race and Electorates: From Sovereignty to Suffrage in U.S. History.

Join us as we commemorate the 100th anniversary of the 19th Amendment and hear powerful stories of a multiracial group of activists who propelled the national suffrage movement toward a more inclusive vision of equal rights.

Dr. Cahill is an Associate Professor of History at Penn State University. She is a social historian who explores the everyday experiences of ordinary people, primarily women. She focuses on women's working and political lives, asking how identities such as race, nationality, class, and age have shaped them.

She is the author of Federal Fathers and Mothers: A Social History of the United States Indian Service, 1869–1933, winner of the 2011 Labriola Center American Indian National Book Award and finalist for the 2012 David J. Weber-Clements Prize, Western History Association. Her forthcoming book, Recasting the Vote: How Women of Color Transformed the Suffrage Movement, a collective biography of six suffragists, follows the lead of feminist scholars of color calling for alternative “genealogies of feminism.”