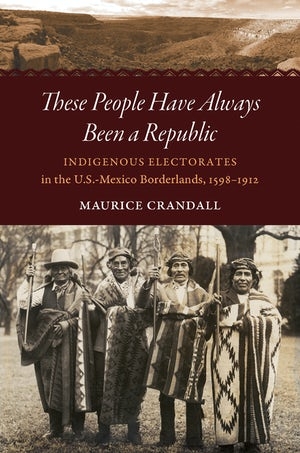 Forgoing the Franchise: When Voting Endangers Indigenous Sovereignty is the second lecture in a three-part speaker series on Race and Electorates: From Sovereignty to Suffrage in U.S. History.

For many who uphold values of democratic inclusion, the vote is seen as the "gold standard" of civil rights. Numerous movements throughout the history of the United States have fought for full enfranchisement. But what if the act of voting endangers community sovereignty and self-government? This talk will explore how Pueblo Indians in New Mexico during the territorial period (1846–1912) fought against colonial mandates by the United States, rejecting voting and U.S. citizenship in favor of self-determination. In so doing, they chose sovereignty over "rights," and thereby preserved their existence as Indigenous Nations.

Dr. Crandall is an Assistant Professor of Native American Studies at Dartmouth College. He is a citizen of the Yavapai-Apache Nation, the author of These People Have Always Been A Republic: Indigenous Electorates in the U.S. Mexico Borderlands, 1598-1912, and the 2016 – 2017 Clements Fellow for the Study of Southwestern America at the William P. Clements Center for Southwest Studies at Southern Methodist University in Dallas, TX.