Meet some of our French students. 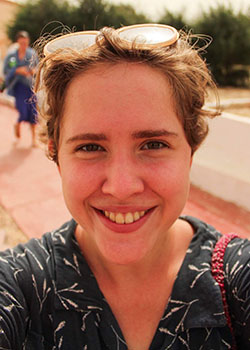 What was your motivation to major in French Studies?

My motivation to major in French came mainly from the French classes that I took in high school. I liked literature and film, and I wanted to develop my language skills so that I could travel more easily and communicate with people. French was the perfect way for me to combine a lot of my interests.

Can you describe your working relationships with Oxy's French professors? Are there any standout classes you’ve taken?

I've taken classes from most of the professors in the French Department, and I enjoy them all. Professor [Susan] Grayson has been my advisor, and she's been an invaluable source of support, resources, and inspiration. I also loved taking Professor [Arthur] Saint-Aubin's “Theory and Practice of Translation” course (French 350), because I felt like I finally understand the mechanics and art of French writing much more.

Did you study abroad? How did it complement and/or enhance your major course of study?

I studied abroad in Dakar, Senegal for three months as part of the Boren Scholarship, which is funded by the U.S. government. I spent three months at the University of Florida's language institute over the summer taking intensive French classes, and then three months in Senegal doing the same thing. My French improved so much! All of the classes I was taking—literature/film, politics, grammar—helped me refine my understanding of French postcolonial politics, identity and more. Additionally, being with a small cohort of people who were as passionate about learning French as I was really helped keep me motivated and excited. I couldn't recommend it enough.

What do you find most compelling about studying French?

I think what I find most compelling is the access you have to a whole other world of literature, thought, and culture. Translations are amazing, but there is something particularly compelling about being able to read and understand another's person's thinking in another language. I also love being able to meet and communicate with new people, and I can't wait to travel to more countries to immerse myself in French again.

What are your post-Oxy ambitions and how has the liberal arts approach helped to shape these ambitions?

I'm interested and obligated to work for the U.S. government because of the Boren scholarship, so I will be looking for a job. I'm also very interested in pursuing grad school in Europe. I've found a lot of great dual-degree programs where I could spend some time in the U.S. and some time in Europe studying International Relations in French. Whatever I do, both for my career and my academic life, I want it to involve French.

Do you have any advice for a student considering a major in French Studies?

I would say to focus on what you love about French or the opportunities that it unlocks. There are times where I'm very frustrated with speaking French because I feel like I've hit a plateau, or I just can't understand some nuance of grammar. But when I'm able to focus on how I feel when I'm speaking, reading, or listening to French, regardless of little errors, I'm much happier. I would say take as many classes as you can, and spend as much time as you can abroad. It really helps you know what's out there and makes all the hard work worth it. 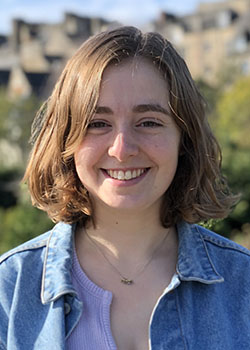 What was your motivation to study French? Was there a specific inspirational moment or experience?

When I first got to college I felt like I was interested in fifteen things but committed to nothing, and I was stressed about choosing a major. In the second semester of my sophomore year, I took an introductory course in linguistics and a class in French translation and I realized that language fascinates me. By the time we needed to declare our majors, my hesitation vanished and I have been learning as much French as I can ever since!

Can you describe your working relationships with Oxy's French professors?

I have taken French classes with Professors [Hanan] Elsayed and [Arthur] Saint-Aubin, and they have both been phenomenal. One class that especially stood out to me was French 350: “Theory and Practice of Translation,” which helped me to discover my interest in translation. I also loved French 301: “Arab Francophone Works” because the literature we read was very compelling and I think it's important to learn more about the Francophone world and not just France.

Can you describe your senior comprehensives research project?

My senior comps project explores the feminization of professional titles. French, being a gendered language, has masculine and feminine versions of nouns that refer to people, but for many job positions there was only a masculine form until recently. French speakers began discussing the creation of feminine forms in the 1970s, and this conversation continues today. My paper will look at the process of feminization across different Francophone countries over time and focus on the different attitudes towards feminization that exist.

Did you study abroad? How did it complement and/or enhance your major course of study?

I studied abroad in Rennes, France during the fall semester of my junior year, and it was unquestionably one of the best experiences of my college career. I did a French immersion program through CIEE where we took all of our classes in French and lived with host families. Studying abroad enhanced my studies because I picked up so much French—I learned new words and phrases daily, and I became a lot more comfortable with the language in a more conversational and everyday context in addition to an academic one.

Do you have any advice for a student considering a major in French Studies?

For any students considering a major in French Studies, I would encourage you to do it! I highly recommend the Occidental French program. It offers engaging classes covering a broad range of topics and perspectives, and the professors are not only very kind and knowledgeable but also do everything they can to support their students.