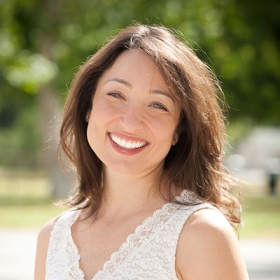 Mary Christianakis is a professor of language, literacy, and culture. She studies literacy development, language, and discourse from a critical sociocritical perspective.

Dr. Christianakis’ work explores discourse practices related to the development of written language in schools, as it pertains to diverse, immigrant/migrant children and youth. She is also interested in literacy development in out-of-school settings, such as community and cultural centers, as well as youth incarceration facilities. Additionally, Dr. Christianakis studies public, private, and non-profit organizational discourse as it related to issues of inequality, social justice and the public good.

In 2017, Professor Christianakis was named editor of Teacher Education Quarterly. She is the recipient of the 2012 Alan C. Purves Award for her article, "Children’s Text Development: Drawing, Pictures, and Writing." This annual prize, presented by the top-ranked journal Research in the Teaching of English, recognizes scholarly work that has the potential to make the most impact on practice. Additionally, she served as an elected member of the Teacher Education Quarterly Editorial Board for two terms.

Professor Christianakis is the Founder, Project Manager, and Director of the OxyGen initiative, a Student-Alumni Generations Project.

Areas of Interest and Expertise

This course offers students the opportunity to analyze the sociohistoric, legal, and cultural tensions surrounding various (im)migrant communities in California. Students will explore the various waves of (im)migration across time to understand the diverse communities of California. Students will also build critical and interpretive capacities through the examination of state policies, statistics, and various historical and empirical studies. Additionally, through the construction and revision of several expository, research-based writings on immigration, students will hone their writing, argumentation, and presentation skills.

This course introduces critical theory in the context of the problem of social justice. Introductions will be made to psychoanalytic, Marxist, feminist, structuralist, deconstructive, and postcolonial criticism. Reader-responses; New criticism; lesbian, gay, and queer criticism, will also be surveyed. There will be close readings of the work of Louis Althusser, Georges Bataille, Michel Foucault, and Jacques Derrida, as well as in depth readings of essays by Guy Hocquenghem, Julia Kristeva, and Trinh T. Minh-ha.

This course will locate the topic of immigration and education within historical, legislative, and cultural debates on what it means to be an American and who has the right to an Education. Students will explore and debate precedent-setting Supreme Court cases, such as Mendez v. Westminster, which challenged the segregation of Mexican children into separate schools, and Lau v. Nichols, which fought hard for non-English speaking students to have linguistic access to the public school curricula. In addition, students will research the historical antecedents to the recent anti-immigrant movements in California, Arizona, and Colorado, which target the use of languages other than English in school settings, and have all but abolished bilingual public schools. Against this historical and legislative backdrop, students will examine ethnographic research detailing the persistent challenges that immigrant children face in schooling, including migrant children, and the ways in which they, their parents, and communities experience those challenges. This course will count towards the Critical Theory and Social Justice (CTSJ) Major, as an Education Minor elective, and also fulfill the group 6 (Intercultural) geographical group for Core Program requirements.

Why did the London Bridge fall down? Is Rub-a-dub-dub really about bath time? Why didn’t an old man live in a shoe? Who is more imperialist, Babar or Peter Pan? Is Tinky Winky gay? Is South Park a children’s show? Is Harry Potter a Hero? How tired was Rosa Parks? Using different critical approaches, this course will examine children’s poetry, picture books, novels, cartoons, feature films, and music videos. Analysis will include topics related to gender, race, culture, and nation, as they play out in the aesthetics, images, and poetics of children’s texts.

Critical pedagogy aims to develop collective critical consciousness for the purpose of transforming oppressive socio-political conditions. In this course students will study critical pedagogy from historical political and sociological perspectives. Students in the course will consider traditional student/teacher relationships pedagogical approaches as well as hierarchies of knowledge promulgated by schools and textbook publishers. Students will analyze and critique theories of the Frankfurt School and the emancipatory works of Paolo Freire the most renowned critical pedagogist. Additionally contemporary readings from Henry Giroux bell hooks and Peter McLaren will focus on critical pedagogy in relation to social structures globalization media and race. Emphasis topic: Postcolonial Theory

The course interrogates the assumptions underlying paid and unpaid labor with respect to "women's work" as it intersects with race, class, sex, gender, and sexuality. Drawing on a socio-critical perspective, we examine the inequalities associated with reproductive labor, child care, housework, sex work, and the 'feminization' of certain professions.

This seminar introduces students to discourse analysis as the ontological and epistemological deconstruction of every day language and symbols and their relationship to power. Throughout the course students develop techniques for gathering and analyzing multimodal transcripts of naturally occurring conversations interviews discourses in institutional settings media discourses and texts of historical materials. The course draws from systemic functional linguistics genre/text studies multi-modal semiotics interactional sociolinguistics and critical social theory to understand how linguistic features of texts constitute and are constituted by the social cultural and local relations processes and contexts in which they are embedded. Using a seminar format students will engage the readings and apply discourse analysis strategies in order to develop their own independent qualitative research projects.

This course looks cross-culturally at children and childhood and uses ethnographic case studies as a basis for examining the ways in which the very young participate in the social lives of their communities. The focus is on those between the ages of 5-12 and the primary topics include: children's play, socialization, learning, political action, and productive work. We will explore the lives of children in horticultural, pastoral, rural, and urban societies in Africa, Asia, Polynesia, and the contemporary United States.

This interdisciplinary course explores the historical emergence of philosophical, sociological, and political theories of property in order to interrogate contemporary global nation-state problems related to human rights, imperial and colonial capitalism and decolonial possibilities.  Topics of study will include the ways in which these emergent Western concepts of property and the exercise of power to secure property have shaped and continue to shape the ideas and practices of slavery, human trafficking, children’s rights, women’s rights, land and property rights, and the claims to possession and dispossession across time and continents. Students will learn about the history of property activism and contemporary efforts to advocate for new/old visions of property.

This course is designed to introduce students to the methods and approaches used in qualitative interviewing. In addition to structured interviews students learn about semi-structured biographical and narrative interviewing methods. The course also explores the ethical dilemmas and research challenges inherent during interviewing as well as the details of conducting qualitative interviews. By the end of the semester each student will have constructed modified conducted analyzed and written up an interview study. Satisfies the experiential learning requirement.

In this course, students examine contemporary child poverty both in the United States and abroad. Topics include how poverty is defined both locally and globally, the numbers and distribution of poor children, as well as the causes of child poverty. Readings explore poverty in relation to education, economics, homelessness, child labor, family, gender, and race. Students analyze historical anti-poverty policies such as the New Deal, the War on Poverty, and the United Nations Convention on the rights of the child, as well as contemporary proposals to reduce child poverty such as childcare, welfare, job training, job creation, and tax policy.

This course combines theory and practice in the study of language and literacy across cultures and institutions. It will introduce students to competing theories of language and literacy development and the politics that undergird those theories. The course will also explore topics such as gender race culture and ethnicity as they intersect and shape language learning. Students will learn about language acquisition heritage languages language variation dialects and bilingualism. The course will also explore controversies surrounding multimodal literacies involving speech writing drawing pictures video and music.

In this course students learn how to do ethnographic research and writing by conducting exercises in participant-observation on or near campus. We review the history of the ethnographic method and its relation to anthropology and the colonial encounter. We also discuss what makes an ethnography critical and the tensions between ethnography sympathy and critical theory. Authors we read include Malinowski Geertz Delmos Jones Dorinne Kondo Renato Rosaldo Ruth Behar Jim Thomas and Kamala Visweswaran. Satisfies the experiential learning requirement. Emphasis topic: Postcolonial Theory.

Working with a CTSJ faculty member, students will select an internship site whose mission is to address matters of inequality and social justice.  The Department has a list of organizations where students can inquire about internships. Students who would like to intern at an organization will have to petition the department with a letter of support from the organization. The practicum experience will be evaluated by their field supervisor, the faculty liaison, and by the completion of the Social Justice Practicum Handbook. In addition to the internship responsibilities, students will participate in regular meetings with the instructor and attend class meetings.  Additionally, they will complete a social justice practicum handbook, which requires deep reflection that brings the internship experiences in dialogue with critical theories related to matters of social justice.  Students may participate in internships as individuals, pairs, or small groups, depending on the needs of the organizations. Open only to Critical Theory & Social Justice majors with sophomore standing or above.

Christianakis, M. (May 2007). “Pocahontas was in love with a guy from England”: Children, history, and language arts texts. Paper presentation at the International Reading Association-Toronto Canada

Christianakis, M. (2001). Digital divisions and the differentially negotiable curriculum. Conference sponsored by The Spencer Foundation and The Center for the Integrated Studies of Teaching and Learning. Berkeley, California

Christianakis, M. (2001). Inside the digital divide: An ethnographic account of diverse and urban fifth graders writing with computers. Conference sponsored by the National Council of Teachers of English. Berkeley, California