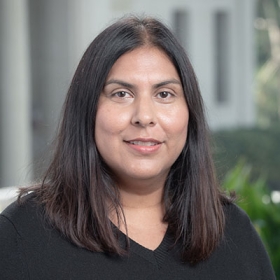 Professor Lopez is a labor economist. Her research focuses on the labor market and entrepreneurial outcomes of Latinos and immigrants, unauthorized immigration, U.S. immigration policy, and poverty.

Please send questions for the department chair to econ@oxy.edu.

“Interior Immigration Enforcement and the Political Participation of U.S. Citizens in Mixed-Status Households” with Catalina Amuedo-Dorantes, Forthcoming in Demography.

Abstract: The past two decades have witnessed an expansion of interior immigration enforcement.  At the same time, the United States has been experiencing a major demographic transformation, with the share of U.S. citizens living in mixed-status households –households where at least one family member is an unauthorized migrant– reaching 16 million.  U.S. citizens living in mixed-status households are personally connected to the struggles experienced by their unauthorized family members.  For them, immigration policy is likely to shape their current and future voting behavior.  Using data from the 2002 through 2014 Current Population Survey Voting and Registration Supplements, we examine if intensified enforcement has impacted the political engagement of U.S. citizens living in mixed-status households.  We find that enforcement has chilled their electoral participation by lowering their propensity to register by 5 percent; however, it has not visibly impacted their voting propensity among those registered.  Importantly, their lower registration likelihood does not seem to reflect indifference for community and public matters, given that it has been accompanied by greater involvement in civic forms of political participation, such as volunteering.  Understanding how immigration policy is impacting the political participation of a fast growing segment of the electorate is imperative, given that they will inevitably constitute a rapidly rising political force in future elections.

Abstract: The past two decades have witnessed an unprecedented increase in interior immigration enforcement that may have adversely impacted the children of unauthorized migrants –the vast majority of whom are U.S.-born citizens.  Using 2000 through 2013 data from the Current Population Survey, we gauge the impact that intensified interior immigration enforcement in the United States is having on the schooling progression of Hispanic youth with likely unauthorized parents.  Intensified enforcement raises the probability of repeating a grade for children ages 6 through 13 by 14 percent, and the likelihood of dropping out of school for youth ages 14 to 17 by 18 percent.  Furthermore, younger children are more responsive to police-based enforcement, whereas older youth are more responsive to employment-based enforcement.  Awareness of the impacts that current immigration policies have on the children of immigrants is critical in informing the policy debate and in protecting the well-being of children.

Abstract: With original survey data, we contribute to a discussion of how segregation and poverty affect the performance of Mexican immigrant-owned storefronts in Los Angeles. We find that though both neighborhood segregation and poverty hinder performance as measured by the number of paid employees, poverty is more important. This was true even of businesses operating for 10 or more years. Although we find some support for the “mixed economy” and “ethnic enclave” theses, we find more support for the theory of concentrated disadvantages. We conclude that the spatial segregation of Mexicans in Los Angeles hinders the performance of Mexican-owned storefronts because of the social isolation it creates and even more so because segregation concentrates poverty. We also found that both our respondents’ class background (in Mexico) and how soon they began to operate business in the formal economy (with legal capital) determines the number of paid employees they hire.

Abstract: We evaluate how intensified interior immigration enforcement impacts the likelihood that children of unauthorized immigrants will repeat a grade or drop out of school. Using a weighted index of the intensity of interior immigration enforcement at the MSA level, we find that increased enforcement has the largest impact on younger children ages 6 to 13. The estimates, which account for the non-random residential location of children and their families, reveal that increased enforcement raises young children's probability of repeating a grade by 6 percent and their likelihood of dropping out of school by 25.2 percent.

Abstract: This chapter investigates the factors associated with poverty and the extent to which these factors vary between Hispanics and non-Hispanic whites. However, in evaluating the factors contributing to racial and ethnic poverty gaps it is important to begin by recognizing that the poor are not a homogeneous group. For example, 31.4 percent of all single, female-headed households live in poverty. The diversity among the poor can also be found within a single race-ethnic group. There is a significant amount of heterogeneity among the Hispanic population living in poverty by country of origin and nativity status. Therefore, this chapter also examined the extent to which the factors associated with poverty vary across groups within the Hispanic population. Full-year, full-time employment is an important determinant in reducing poverty rates among Hispanic men and women. However, Hispanic women also experience higher levels of poverty because of their low employment levels and large concentration among single headed households. Finally, decomposition results show that human capital and family composition contribute to the difference in poverty rates across different groups. Recognizing this diversity is essential in developing effective antipoverty programs.

“Skilled Immigrant Women in the U.S. and the Double Earnings Penalty” Feminist Economics (2012)

Abstract: Although a large literature exists on the United States labor market experiences of low-skilled immigrant men, relatively few studies have examined the labor market position of highly skilled immigrant women. The current study explores the issue of labor market discrimination and examines the extent to which highly skilled immigrant women experience an earnings disadvantage as a result of both gender status and nativity status. Relying on data from the 2000 US Decennial Census 5-Percent Integrated Public Use Microdata Sample and using an augmented Oaxaca decomposition technique, this study finds that highly skilled immigrant women do experience a double earnings penalty. In addition, the results suggest that nativity status explains a larger portion of the double earnings penalty than gender status. These findings are important in light of the higher emigration rates for skilled women than for skilled men in regions such as Africa, Latin America, and Oceania.

"Antipoverty Policy: The Role of Individualist and Structural Perspectives," with Gbenga Ajilore, William Darity, Jr., and Leslie Wallace, in the Oxford Handbook of the Economics of Poverty (2012)

Abstract: The poverty rate in the U.S. is at its highest rate in nearly two decades. This crisis of rising poverty necessitates that economists and policymakers seek to fully understand the factors that contribute to the persistence and growth in poverty, in order to design effective anti-poverty policies. In this chapter, we examine both individual and structural theories of poverty.  Individualist theories emphasize personal responsibility for one’s own impoverishment, while structuralist theories emphasize social processes that produce the poor. We draw the connection between these explanations for why individuals are poor and the design, implementation, and effectiveness of anti-poverty policies. In many cases, we argue that anti-poverty policy has been ineffective as a result of the emphasis on individualist theories. Thus, the future of poverty and the direction of anti-poverty programs lie in the beliefs among economists and policymakers as to why people are poor. As long as it is believed that the main cause of poverty is due to personal responsibility, then anti-poverty policy will be designed to perpetuate the presence of poverty.

A continuation of Economics 101 that completes the coverage of economic principles by incorporating the development of more sophisticated analytical tools. Microeconomic topics include production costs, the behavior of firms under different market structures (competition, monopoly, and oligopoly), taxation and income distribution, and input markets. Macroeconomic topics include the Keynesian model of output determination, the monetary system, and the effects of fiscal and monetary policies. Prerequisite: Economics 101.

The goal of Labor Economics is to enable you to use economic analysis and reasoning to understand wage and employment determination in U.S. labor markets. This course will expose you to current theoretical and empirical debates within the discipline. We will cover such topics as labor force participation, labor demand unemployment, labor mobility, wage structure, labor unions, human capital investments (education and training), internal labor markets, and labor market discrimination. Relevant public policy issues such as the minimum wage, living wage ordinances, compensating wage differentials, immigration policy, affirmative action, income inequality, and welfare programs also will be addressed in this course. Prerequisite: Economics 250.

Economics of Race and Gender (Econ 328)

An examination of the historical and contemporary economic positions of women and underrepresented groups in the United States. Primarily this course is designed as an overview of major theories, trends, and debates on the topic of race, gender, and economic inequality in the labor market. Specific topics include racial and sexual discrimination, labor market segmentation, wage differentials, labor force participation, red-lining, educational disparities, and income and wealth inequality. Relevant public policy issues such as affirmative action and welfare also will be addressed. Prerequisite: Economics 102.