The City of Los Angeles (LA) Mayor’s Office of International Affairs assigned a team of six students to draw on the best practices of other cities and new data sources to improve measures of impact, inclusion, and representation of LGBTQIA+ Angelenos in city services. John Hammer ‘21 and Alejo Maggini ‘22 represented Occidental College and reported to the Los Angeles Mayor’s Office for International Affairs

LEAVING NO LGBTQIA+ ANGELENOS BEHIND

The United Nations’ Sustainable Development Goals (SDGs) promise to “leave no one behind,” yet the Lesbian, Gay, Bisexual, Transgender, Queer, Intersex, Asexual+ (LGBTQIA+) community was not specifically included in the SDGs. Even as the international framework fails to directly mention LGBTQIA+ populations, local governments have the flexibility to localize the global goals to fit their local priorities and values. The City of Los Angeles has taken the initiative to adjust target and indicator language to include the LGBTQIA+ community in its localization of the SDGs.

In the summer of 2020, The City of Los Angeles (LA) Mayor’s Office of International Affairs assigned a team of six students from the University of Southern California, the Thunderbird School of Global Management at Arizona State University, and Occidental College to draw on the best practices of other cities and new data sources to improve measures of impact, inclusion, and representation of LGBTQIA+ Angelenos in city services under the guidance of a faculty advisor Professor Sofia Gruskin (Institute on Inequalities in Global Health, University of Southern California).

The team began by identifying cities that have localized the SDGs and are leading the way on issues of LGBTQIA+ inclusion. Starting with a list of over fifty potential cities to learn from, we narrowed down to a final list of seven cities to directly engage with through interviews based on the following criteria: 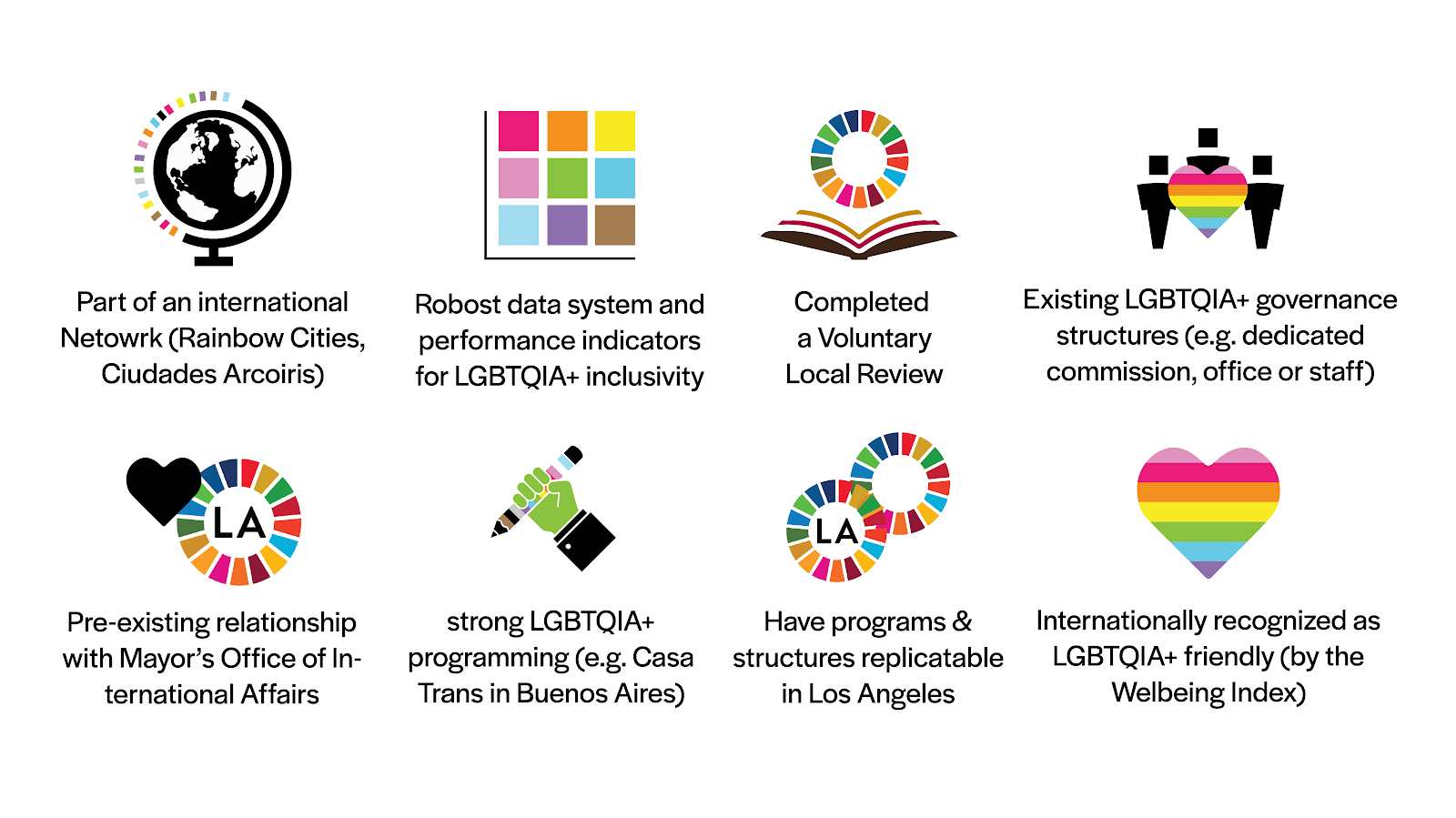 The final list of cities identified for interviews was: Barcelona, Buenos Aires, Mannheim, Mexico City, New York City, São Paulo, and Seattle. Not all cities met each criterion point, but internationally these seven met the most qualities we were looking for. We were successful in contacting and interviewing government representatives in all of the cities except for São Paulo. The city interviews were instrumental in identifying six key best practices for LGBTQIA+ inclusivity in city services: 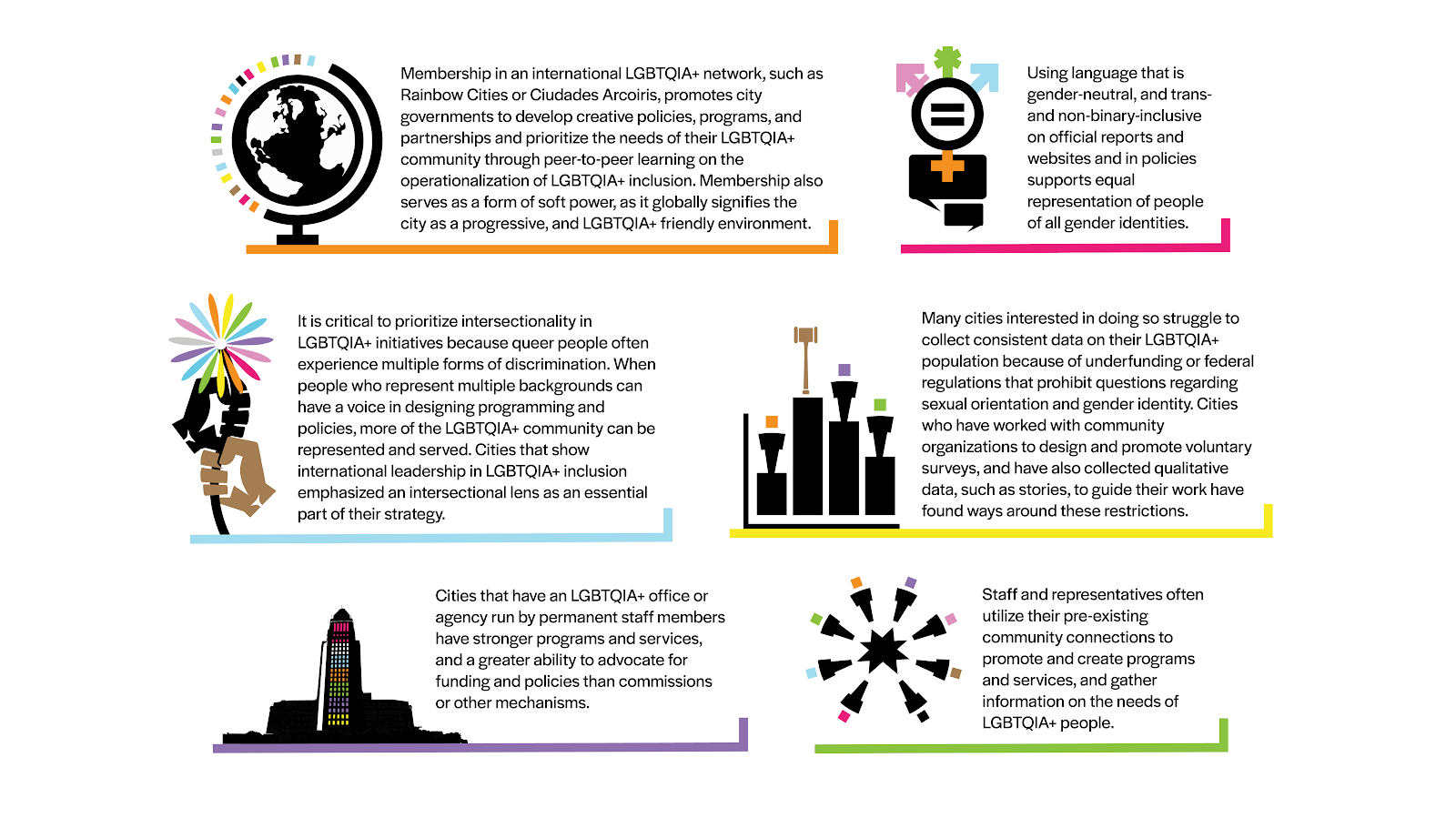 Building on our key findings from data collection and interviews with the cities, the team sought to identify disaggregated data sources for the City of Los Angeles to use in the measurement of LGBTQIA+ inclusivity in the localized SDG framework. Currently, the Los Angeles Sustainable Development Goals framework has five indicators that collect data on the LGBTQIA+ community:

5.x.1 and 10.x.1: Whether or not legal frameworks are in place to promote, enforce and monitor equality and non‐discrimination on the basis of sexual orientation and gender identity

10.x.2: Proportion of students who feel that LGBTQ students are accepted at their school.

10.x.3: Whether or not there are centralized protocols for updating sex/gender in official certifications

These indicators demonstrate the City’s commitment to ensuring that all Angelenos, especially the LGBTQIA+ community, are not left behind. Creating additional indicators to understand the experience of the LGBTQIA+ community in Los Angeles and disaggregating current indicators for LGBTQIA+ can strengthen the City’s ability to better address the needs of LGBTQIA+ Angelenos. At this time, the team proposes 20 indicators (tabulated below) for the City to incorporate into the SDG framework. This final list of indicator disaggregations was identified based on the following criteria:

As the City of Los Angeles looks to the future, the team recommends the following points for future study: