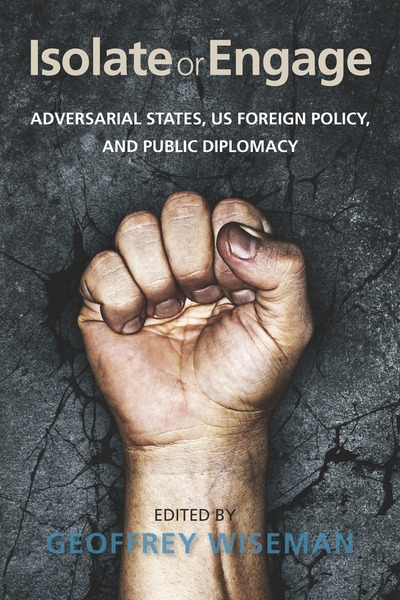 Dr Wiseman’s lecture in Johnson Hall’s Atrium began by explaining that short of war, governments have two behavioral choices with adversarial states, to either isolate or engage. Generally, in the United States this partisan decision is divided among conservatives who favor isolation and liberals who prefer to engage. Arranging the scholarship to create "inductive" case studies, Dr Wiseman concludes that according to historical results, it is better for states to engage with their adversaries than it is to isolate them. Moreover, public diplomacy to Dr Wiseman is an adjunct tool, but not a solution. Of course, engagement is not a rule, for there are pros and cons. By engaging, the state in question rewards the adversary’s bad behavior, implies legitimacy, and offers negative propaganda for the adversarial state’s government. Not to mention the engaging state becomes a target for attack, whether that be in the form of terrorism or merely protest. On the contrary, states that engage are able to counter the propaganda of their adversaries. In addition, diplomatic reporting and intelligence is improved, diplomatic cover is provided, and a state can better protect its citizens internationally when states have formal ties abroad. According to Dr Wiseman, these positive elements most often outweigh the negatives.

Given the benefits and detriments of engaging, Dr Wiseman stated that there is no universal rule for when to engage or isolate adversarial states. However, lines cannot be crossed. Engagement is important, always, but removing diplomats for "consultation" can be used as a powerful tool. One of many examples of crossing the line is when Russia annexed Crimea. Dr Wiseman believes that temporarily removing US diplomats from Russia would have been a great use of soft power to denounce Russia’s actions that conflicted with US interests. Such a maneuver would have informed the Russian government that the United States was not pleased with their adversary’s behavior and that that behavior needed to change if Russia desired normalized relations. The line that demarcates isolation and engagement is a viable bargaining chip in the theatre of international relations. Once engagement is established, the tool can be used by the engaging country to its advantage. Without engagement, this soft power is not a resource.

An article on Cuba, Obama, and isolation, featuring an interview with Dr Wiseman was recently published in The Atlantic. Interested readers can find it here.