Oxy at the UN Newsletter No. 4: Oxy Campaign Launch Event 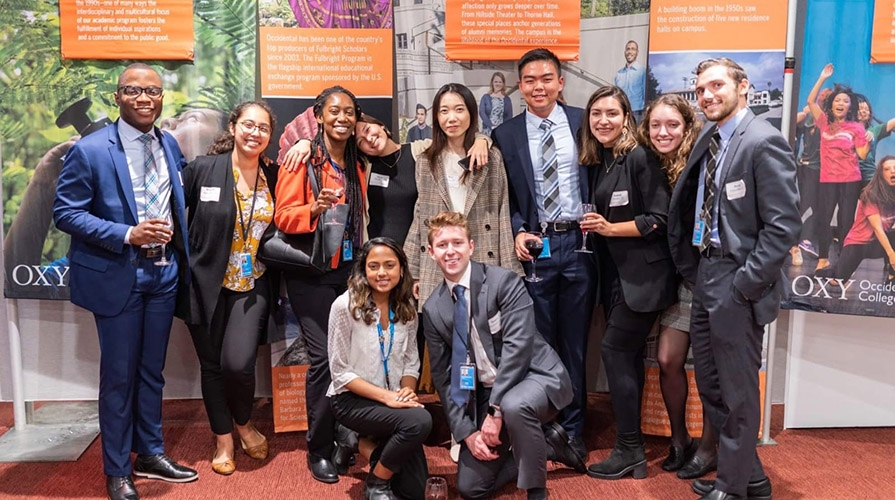 We have made it past halfway through the semester, yet it certainly feels like the journey just began a few days ago. The past two weeks have been an adventure of a lifetime as we have had the opportunity to dig deeper into our internship responsibilities.

As the United Nations committee season reaches its peak, interns in UN country missions are beginning to see themselves take on the roles of negotiators, something usually assumed to be reserved for high-level diplomats, on various UN resolutions – sometimes butting heads with longtime professionals from other country missions. From attending high-level plenary meetings with top UN officials to developing policy and negotiation strategies, the G15 are beginning to have a strong grasp of how the UN system works and how both national governments and civil society interact with it daily. The G15 are taking on leadership roles on various small- and large-scale projects including organizing high-level events and training workshops, developing institutional brochures, and creating agency websites amongst others.

The statement  “...as a diplomat ... human relations ultimately make a huge difference,” made by Madeleine Albright, former US Ambassador to the UN, continues to reflect in every aspect of our UN experience as we interact daily with various officials at our internship sites and within the larger UN system. Beyond the sternness in the negotiating rooms and the haste in the halls of the UN headquarters, the UN is a place to build both lifelong relationships and mentorships and this is something the G15 are taking full advantage of.

Below are statements made by members of the G15 about their internship experiences:

“This past month has been a time of reflection in tracking my personal and professional development over the past two months in New York City. It was astonishing to see how I have been challenged to push my limits and abilities. One of my most noteworthy memories this semester has been on working on my own resolution, following instructions from London, and negotiating with other major countries. Lastly, a personal highlight for me in working at the United Kingdom Mission is placing the research skills I have developed at Oxy into researching the past 15 years of revitalization resolutions in both the General Assembly and the Economic and Social Council. This internship has shown me how Oxy has prepared me to become a young professional in the political realm. I am thankful for being able to participate in this internship. From being able to meet various alumni of the program to witnessing the creation of history in the United Nations, this program has been a transformative experience for me.”

“Our time at the UN is more than half-way over, which is both exciting and sad. At this point, I have become more than an intern in my office. I have been able to gather enough insight in the field of HIV and health, enabling me to take on more difficult tasks from my supervisors. Furthermore, I feel that I have become part of the family at UNDP. Unfortunately, I know I will be leaving these incredible people in just about a month. My team has just returned from a conference that I helped plan in Istanbul. We received a lot of positive feedback from the conference attendees. They indicated that it was an informative gathering of UN staff, NGOs, and government officials. Currently, I am working on two tasks. The first is a “Deep Dive” on human rights and HIV in which I am researching and analyzing how legal policies by national governments in priority countries impact the incidence rates of HIV. I am also writing on an Issue Brief on how micro-health insurance can be used to help establish Universal Health Coverage around the world and ensure that no individual is left behind. I am enjoying every bit of the UN and New York City. My only wish is that time would slow down for the next month!”

Also, on October 22nd, 2019, we had Oxy administrators, staff, and faculty join us for the New York Launch Event put together to appreciate our internship hosts and supervisors for their commitment to the program and as well enable the college to launch its Oxy For Good Campaign here in New York City. Among the speakers for the night was our very own Snigdha Suvarna, who gave a riveting speech about her experiences at UNICEF and the mentorship and professional growth she is gaining at her internship site. She was also joined by her internship supervisor, Kerida McDonald, who expressed her appreciation for the work Oxy interns do at UNICEF and her commitment to the success of her interns and the program. Oxy alumnus, Rhea Bhatia, also gave a great speech highlighting the role her Oxy education, especially from the Kahane Oxy at the UN Program, has played in her professional growth and personal achievements after graduating.  The event was also graced with our guests speakers: Bill Kahane – Oxy alumnus and patron of the Kahane Oxy at the UN Program – and Steve Coll – Oxy alumnus and Pulitzer Prize-winning journalist and author, both of whom spoke about the impact of their Oxy education on their career and about their current personal and professional endeavors.

Aside from the internships, the G15 have made substantial progress with our task force – a component of the program which enables students to take on consulting roles with UN organizations – with UNICEF on the green economy. As we approach the latter stages of this project, we are continuously engaging with our clients, UNICEF, to ensure that we are on task and are able to produce the end-product within the expected timeframe and guidelines. The G15 are poised to produce the best results from our research, engagements with youth and organizations around the world, and mostly our long and sleepless nights. 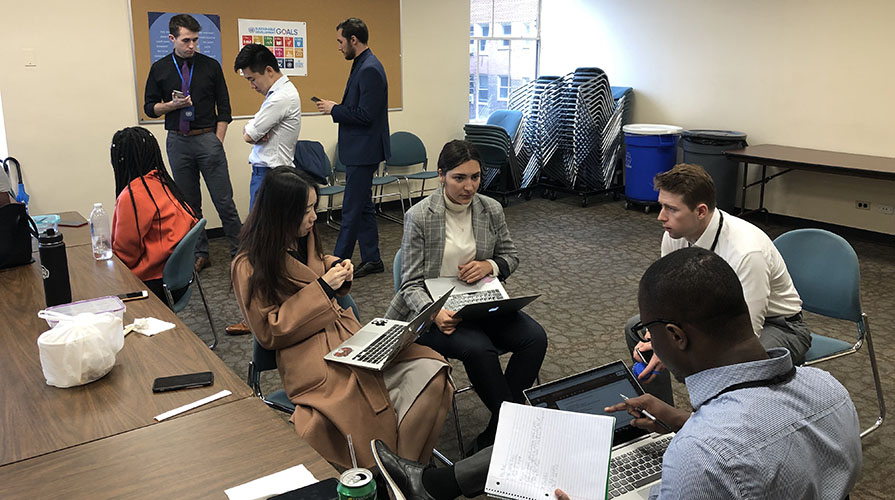 Moreover, we have had two UN professionals visit us in our classes within the past two weeks to speak with us on their personal journey to working within the UN system, their current work, and their bold efforts to progressively change the trajectory of the world. One of our guest speakers was Dr. Charles McNeill, Senior Advisor for Forests and Climate at the United Nations Environment Program. As one of the foremost environmental experts in the UN system, he has been a lead player for the UN on the Paris Climate Change Agreement and a champion of indigenous people’s rights. He has organized numerous interfaith dialogues on the environment and co-created the global forestation program REDD. For McNeil, the conservation of forests is not only a necessary responsibility to save our natural resources and the planet as we know it, but a moral and ethical one due to which religious leaders must support the forest conservation agenda. This is why he is taking advantage of the political, economic, and moral authority religious leaders possess and the role such leaders could play in reaching the masses to educate them on the topic. 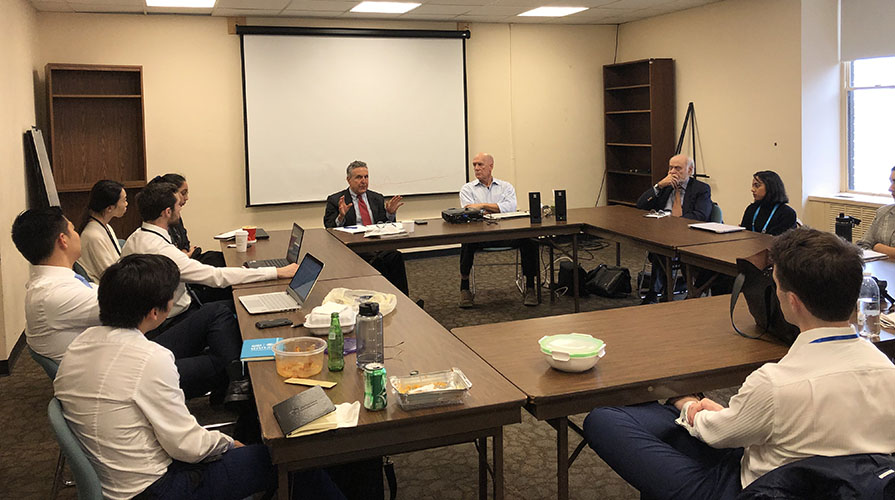 We also had Marina Kumskova, the Advocacy Officer at the Global Partnership for the Prevention of Armed Conflict (GPPAC), visit us for our Peace Building and Conflict Prevention class with Professor Jacques Fomerand. At GPPAC, Marina works to connect local peacebuilders with international peacebuilding actors to strengthen local ownership and localization of peacebuilding. Marina has been working in the field of human rights since 2013, by being part of numerous projects exploring human rights issues around the world. She also worked with the Women, Peace and Security Programme at Women’s International League for Peace and Freedom. There, Marina worked to advance gender-sensitive conflict analysis and women’s participation in peace work with a specific focus on the Middle East and North Africa. Marina spoke to us about UN interventions in various states which are aimed to capacitate governments in peacebuilding efforts, the need for bridging the development agenda and the peace process, and the need for partnerships with regional organizations and civil society in peacebuilding efforts. In advocating for the local ownership of peacebuilding processes, she stressed the importance of women's participation in peace work and its role in facilitating the peace process. 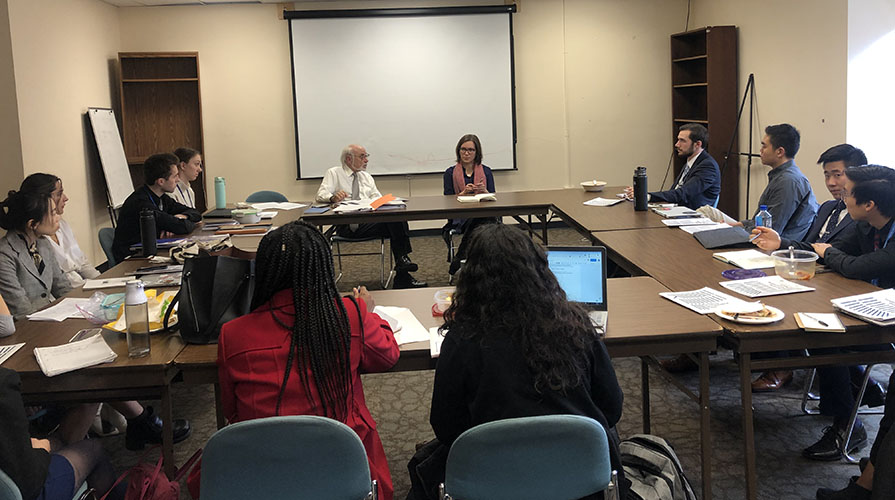 This brings the fourth edition of the Kahane Oxy at the UN Newsletter to an end. Thank you for tuning in. For more updates on the program, follow our Instagram page: @oxyattheun.