Oxy at the UN Newsletter No. 5: Final Weeks | Occidental College

Oxy at the UN Newsletter No. 5: Final Weeks 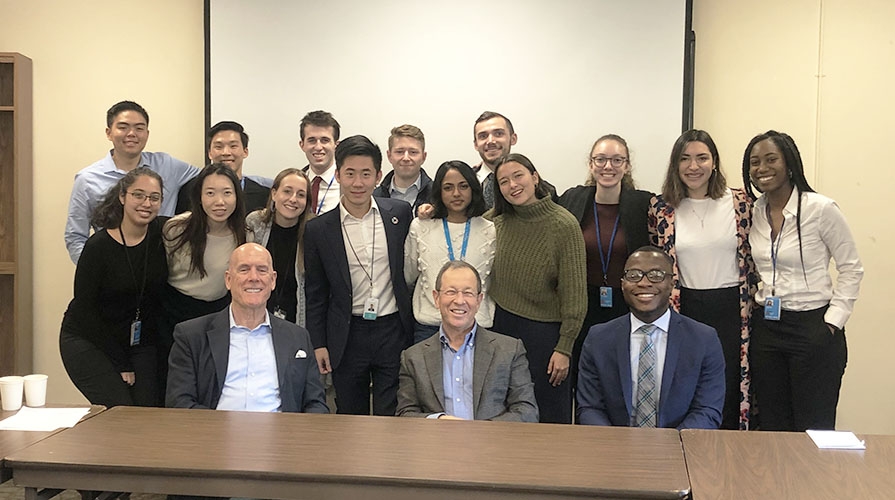 The weeks and months that have gone by have been quite exciting and fulfilling; but, with such attributes come the strain and pain of hard work, limited sleep and coffee; lots and lots of coffee.

However, we have just two weeks left before we bid our farewells to the wonderful people and experiences that have made this journey worthwhile. The G15 is pictured above with Prof. Gardner and Mr. William Kahane.

A new addition to the Kahane Oxy at the UN program, the G-15 and Professor Douglas Gardner took a trip to Cambridge, Massachusetts to explore how the academy and its institutions interact and engage with the United Nations, national governments, and civil society to direct and guide international and domestic development and economic policies. We met with Harvard University professor, Thomas Vallely, and Tufts University professor, David Dapice - both Myanmar and Vietnam domestic policy experts - at the Ash Center for Democratic Governance and Innovation at the Harvard Kennedy School. The two shared with us their expert knowledge on the successes of economic, political, and social policies, and international interventions in Vietnam and the failures of government policies in Myanmar and its influence on the Rohingya Crisis.

We also met with Nicholas Burns, former US ambassador to NATO and Greece, at the Harvard University Kennedy School who shared with us his path to becoming a foreign service personnel and his take on current US domestic and foreign policies. Mr. Burns gave a riveting analysis of the negative impacts the current administration has had on the reputation of the United States in international affairs. He established that after this administration, we are going to have to embark on the greatest reclamation process in the history of this nation to restore the nation’s standing across the globe. He added that we will have to rebuild our alliances, restore our trade agreements, provide solace to those who seek refuge from us, and reconstruct our democratic values in order to recover from the damages made to the institutions and values of this nation. Mr. Burns concluded our discussion with Winston Churchill’s quote “The price of greatness is responsibility.” With this quote, he encouraged us to always take responsibility and be action-oriented in working to find solutions to some of the greatest problems that plague our communities, our country, and the entire globe. 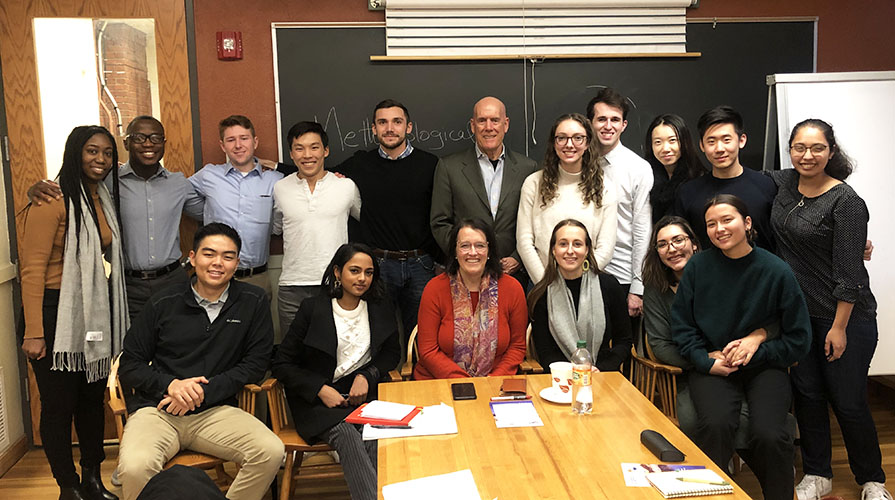 We also visited Oxy at the UN program alumnus, professor, and director of the Center for International Environment & Resource Policy at Tufts University, Kelly Gallagher, at the Fletcher School. Ms. Gallagher shared with us her academic journey from Oxy to Tufts University and the impacts of California's environmental pollution on her health during her time at Oxy which inspired her to pursue a career in environmental, technology, and energy policy and research. Ms. Gallagher was also an instrumental player in influencing the United States - China deal which led to the establishment of the Paris Climate Agreement. She shared with us her disappointment at the US administration’s decision to withdraw from the agreement and the reassurance of the Chinese government waiting on us to rejoin the agreement after the current administration. She, however, added that it will take a substantial amount of time to repair the damage caused by the United States’ withdrawal in order to meet the goals of the agreement.

At both the Harvard University Kennedy School and the Tufts University Fletcher School, we met with their directors of admission who spoke with us about the unique academic experiences their graduate schools offer, their application processes, and tips on how to submit good applications.

Our trip to Cambridge, Massachusetts was indeed an exciting one as we braced the frigid cold to explore the historical city, take in the aura of tradition and excellence that the city brings to bear, and gain from the wealth of knowledge from the academic professionals we interacted with who call the city and its academic institutions home.

Back in New York City, we are making our way through the semester with grit and grace even as the semester nears its end. Aside from our regular internship and classwork, we have had some guest speakers visit us over the past few weeks in both our UN Experience class and our Conflict Prevention classes. One such speakers is Mariam Jalabi, the Representative of the Syrian Opposition Coalition to the United Nations in New York. Ms. Jalabi is a founding member of the Syrian Women's Political Movement and has led the Syrian Opposition’s diplomatic engagements with the Permanent Missions to the United Nations and the UN system. Her work focuses on women’s inclusion in politics and decision-making and her advocacy and leadership have proven instrumental in framing the narratives of Syria within the UN community. In her discussion with the class, she shared with us the history of the ethnic heterogeneous country that is Syria, an in-depth analysis of the current political crisis in her country, her take on the withdrawal of US troops from Northern Syria, and her views on the path forward for the country. 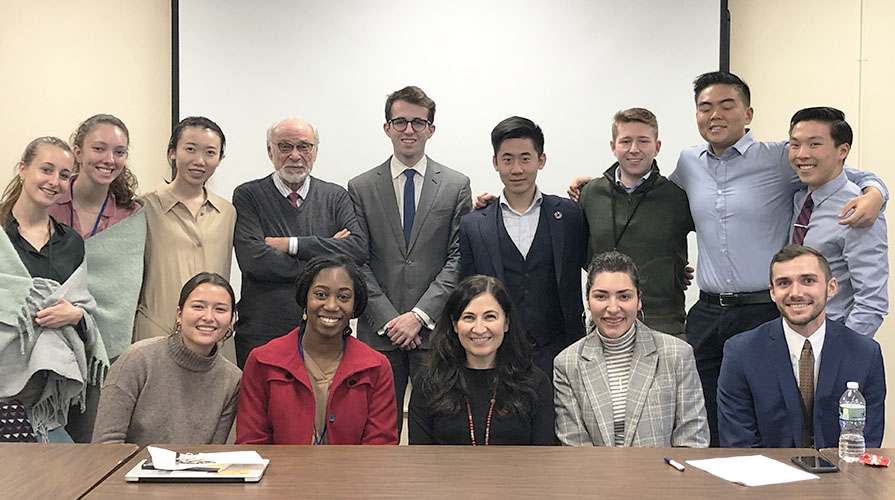 We also welcomed Mr. William Kahane who spoke to us on the topic: Ingredients for Success. “Life and experience are more valuable than sitting at a desk,” Mr. Kahane began his discussion highlighting this phrase as one of his key life principles. He advised us to always seek experiences outside of our classrooms and comfort zone by getting out there and doing. He touched on his inspiration to learn another language, German, and the irregular career path he had, adding that we should not be afraid to try new careers and take on new opportunities. He spoke about the importance of giving back, be it through money or talent, at any point in our lives and the unique opportunity this program gives us to do just that. He heralded the value of community and togetherness this program instills in its participants and the impact of this in our future endeavors. Finally, he spoke about the importance of trust in any personal or professional relationship and the importance of self-advocacy in any area we find ourselves. We are indeed grateful to have had the opportunity to hear from Mr. Kahane on his personal and professional keys and values for success and for his continuous generous support to the Kahane Oxy at the UN program. 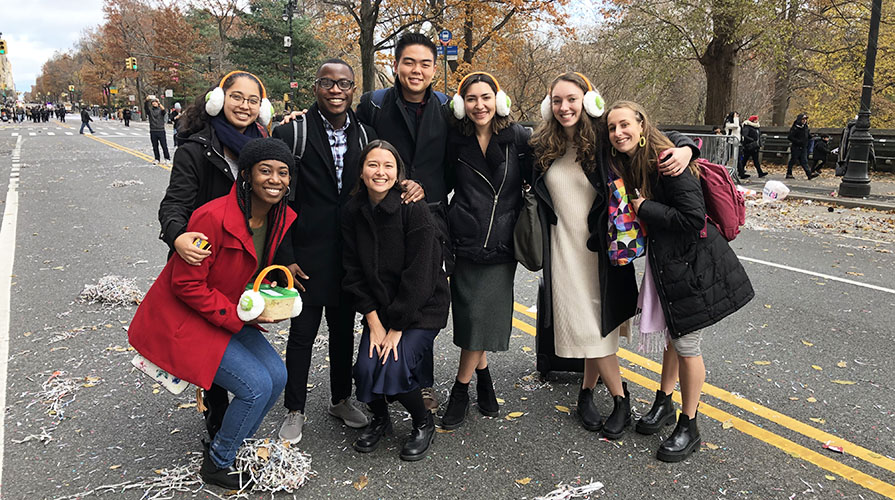 In the spirit of giving thanks this season, we are immensely grateful to our speakers at Cambridge, Massachusetts and in New York over the past few weeks. We are also grateful to have had the opportunity to hear from Mr. Kahane on his personal and professional keys and values for success and for the generous support of the Kahane family to the Kahane Oxy at the UN program.