America's Challenges in the Pacific 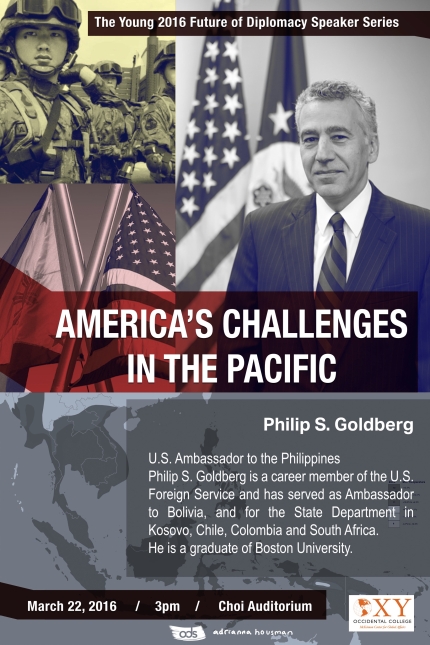 Disclaimer: This lecture is "not for attribution." No direct quotes have been used.

Ambassador Goldberg began with a brief history of the U.S. relationship with the Philippines, which dates back to former president William H. Taft’s (then head of the Taft Commission) role in aiding with the establishment of a Philippine civilian government (in the early 1900s). Interestingly enough, as the U.S. enters another election year this 2016, the Philippines enters its own amidst a backdrop of growing challenges in East Asia.

A recurring idea in his talk was that of a U.S. rebalancing in the Pacific. While conventional discourse has been referring to recent U.S. involvement in the region as a "pivot," this is an inaccurate image as it suggests a sharp turn, when the U.S. has been maintaining its alliances in the Pacific for decades since their formation through the 1951 Mutual Defense Treaty. The 21st century is an Asian Century, and with the growing, mutually beneficial economic ties between the U.S. and Asian countries in Southeast and East Asia comes greater involvement in the region. In returning specifically to the state of affairs in the Philippines, the democratic government has since worked hard to overcome historical problems such as corruption, and in many ways the country has left behind its label as the "sickman of Asia."

As is the case with the economic advancement in the Philippines, increased militarization and collaboration are two key aspects in rebalancing the region. It is important to note that the U.S. welcomes it’s "rise," and efforts are being made to resolve existing tensions such as those surrounding the South China Sea dispute. One way is through transnational economic partnerships (i.e. the Trans-Pacific Partnership), which could create an environment conducive for the formation or strengthening of existing alliances in the Pacific. Today, there is pushback for such agreements not just in the region, but also in the U.S. That said, there is a need to emphasize that the benefits of the partnership go beyond economic incentives.

Another way the U.S. is helping alleviate tensions in the region is by supporting the Philippines in legal and humanitarian settings. The country is aided in conflict prevention measures, governmental modernization, and disaster preparedness in the face of climate change vulnerability. In many ways, the Philippines is at a critical stage in its growth as a democracy and market economy: it faces a demand for further economic growth that is sustainable and inclusive, it is largely a remittance based-economy dependent on the remittances of Overseas Filipino Workers (OFWs), and the private sector is bustling as businesses emerge and companies innovate and outsource. This is perhaps why it can be viewed as a center-piece of [the] rebalance. Further evidence of the strong ties between the U.S. and the Philippine governments is present within this country’s borders. Majority of those in attendance were surprised to learn that Filipinos make up the second largest immigrant group in the U.S., and more students from Southeast Asia are flying to the country to pursue their tertiary education in American universities and liberal arts colleges.

Finally, there was a brief discussion on the prospect of peace in the Philippines, particularly in Mindanao, the southern region of the country. Some U.S. peace initiatives have engaged directly with communities in the south and have brought high school students to the U.S. to help establish peaceful relations between the two countries on both a governmental and a societal level. Peace initiatives are more relevant now than ever with rumors that ISIS is establishing franchises in Southeast Asia.

Ambassador Goldberg ended his talk with a belief that the U.S.-China relationship is important not only for either country, or for those in the region, but for the world as a whole. It is up to the next president of the U.S. (and the Philippines) to ensure that peaceful, economic cooperation prevails in the Pacific.